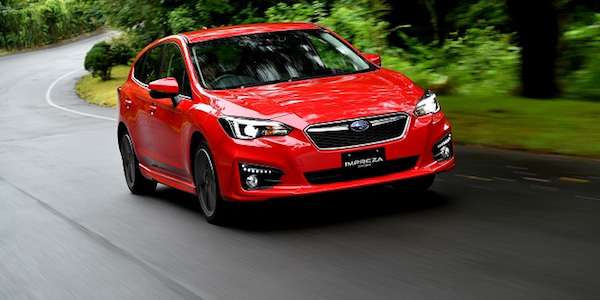 The all-new 2017 Subaru Impreza needed a total makeover. What does it mean for consumers?
Advertisement

The new 2017 Subaru Impreza didn’t just get a remodel, it received a total makeover. Why did the Impreza get 95% new parts? Subaru is on the verge of a total lineup makeover and the new Impreza sedan and 5-Door lead the brand’s new global direction.

Subaru isn’t standing pat with it’s top-selling lineup of all-wheel-drive vehicles. They built a new Global Platform and Impreza is the first Subaru to get it. All Subarus over the next 10 years will feature it. There’s numerous enhancements that will make Impreza and Subaru even more competitive with it’s Japanese and American rivals.

Subaru’s new 2017 Impreza launches with greater interior space, plus a sporty wide and low exterior presence. The body and chassis rigidity are increased significantly and consumers should feel a big difference. According to Subaru, body vibrations have been reduced by 50 percent, Drivers should feel improved response to inputs in steering and driving dynamics, and body roll will be improved in the corners.

The 2.0-liter engine gets more power and the weight of the drivetrain has been reduced which will result in sportier performance. The new-generation boxer engine comes with higher compression, better gas flow, and faster engine stop timing resulting in improved fuel efficiency. The CVT automatic gets a weight reduction and wider gear range which should improve efficiency and performance. An electronic parking brake is also new to Impreza. The new models also get new generation brake calipers and high strength material brake pads for better stopping performance.

The new Impreza gets an increase in cabin space for greater legroom and improved rear knee space for passengers. It also gets easier cargo area access due to a lower ride height. Interior noise should be reduced due to the additional soft texture and sound-proofing applied to almost every part of the Impreza cabin.

Subaru is all about safety and the new 2017 Impreza will protect its occupants better than the previous generation. Collision energy absorption efficiency has been improved by 1.4-times in the new sedan and 5-Door hatch. The third-generation Subaru EyeSight will debut in the mid-and range-topping Impreza variant. Top trims will also get Vision Assist features, Vehicle Dynamics Control (with Active Torque Vectoring), and Hazard avoidance similar to that of high performance sports models.

Subaru says the all-new 2017 Impreza is 95 percent new and it gets a total makeover which Subaru needed to do to make it competitive in the compact car market. The Subaru Global Platform will be featured on all new Subaru models in the next 10 years, making the Japanese automaker even more competitive with it’s rivals.