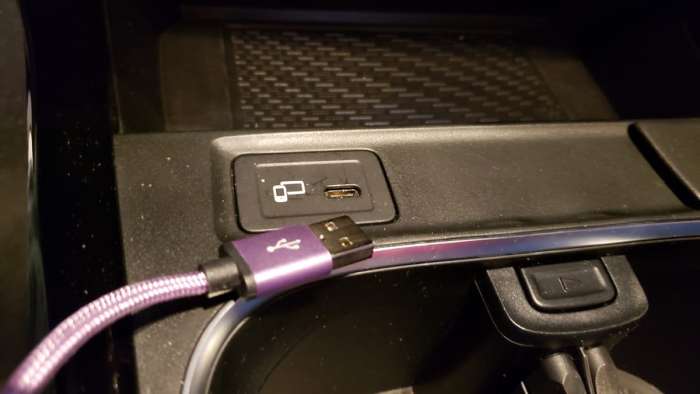 The universal serial bus is not universal. In fact, it is about to get a lot smaller. Here’s the reason why and how you can deal with it in your vehicle.
Advertisement

That rectangular socket in your car that you have been plugging a phone cord into for the past three decades is about to shrink. Your next new vehicle may not have one of the old styles at all. We recently tested a new Mercedes Benz car that had only the new smaller style (Shown in our top-of-page image). Don’t worry about it. There is an easy workaround. 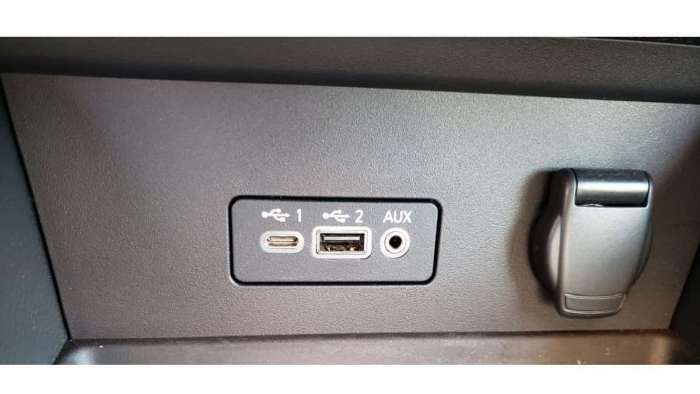 The USB port (universal serial bus port) has been around since the 1990s. You know and maybe don’t love the connector as the little square male plug you insert into a socket in your car or into a power cube so you can power up a phone or laptop. If you have purchased a new phone or another device lately, you may now know that the devices are using smaller sockets. The USB has been evolving for some time. The newest one is called USB-C or USB Type-C.

USB vs. USB-C Connections
There are some advantages to the new standard USB-C. More data and power can flow through the little hole than the big one. Also, the new socket and plug end are rotationally-symmetrical. That means there is no right side up. They connect in either direction. Older USBs only work in one direction when you try to plug them in. 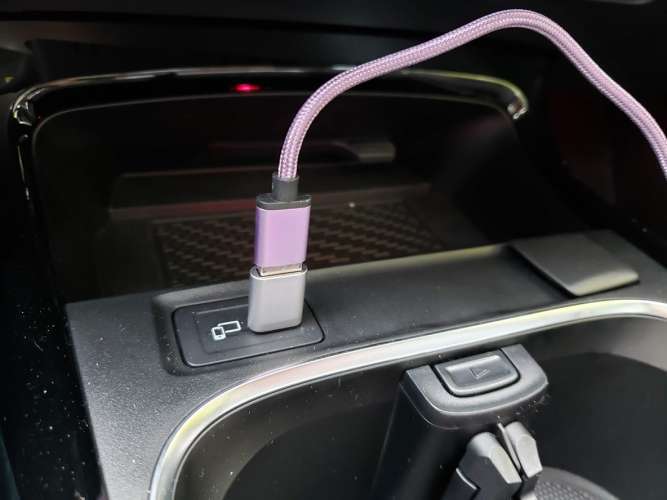 Which Phones Plug Into USB Type-C
Both Apple and Android phones now use USB Type-C connections. At least at the output end of your cable. We suspect that most phones will work forever using a USB Type-C end into the phone and the older and larger USB plug end into the power source. The problem is that your next car may just have a USB Type-C female port. So you will need new cables, right. Nope. There is an adapter that you can buy to still use the larger cable. Check out our image above of us using the adapter to plug a Galaxy S9 Android into a Mercedes. It worked fine for power and Android Auto also worked perfectly. You can get the adapter at Amazon for about three bucks.

So, the upshot is that your next car may come with the smaller USB Type-C female port. If your phone is a bit behind the times, don’t sweat it. You can use the adapter until you buy your next phone that will have a cable with the small male USB Type-C connector at either end. Unless of course, the industry adapts again. Change is the only constant. Embrace it.

Marc Stern wrote on March 9, 2020 - 12:17pm Permalink
One comment: when I use the USB port to charge my Motorola smartphone I find that the USB 3.0 connector (that's what computer geeks call it) isn't really non-directional. If you don't insert it correctly (tines up) then you risk messing up the whole thing. Now, that could be the implementation on my phone, but, when I use any of my fast-chargers, it seems to work like that (at least on the Moto-e).
John Goreham wrote on March 9, 2020 - 2:15pm Permalink
Thanks, Mark. USB 3.0 is not non-directional. It has a correct side up. I made a slight edit to reinforce the point that it is the new USB Type-C connectors that work however you plug them in.
Dimos wrote on May 4, 2020 - 10:20am Permalink
Regrettably the adaptors don't work well with apple connect and certain cars. Maps on the car's screen and calls are disrupted if you use the Apple connect
Jerry lister wrote on August 29, 2020 - 7:51am Permalink
'Change is the only constant. Embrace it.' Sounds like a command. Tut tut The ethics of having to buy yet more cables or adaptors is dodgy. Cars should offer both types. USB 3.1 full size and USB C otherwise they are inconveniencing the customer, especially as full size for charging is the established standard right now and will remain so for a considerable period of time. What happened to common sense? Backwards compatibility please !!
Mark Garton wrote on February 1, 2021 - 5:39pm Permalink
Micro sub ok for phones a standard usb is best for cars ad they are better than flimsy small usb I put music on memory stick for my car having to buy an adaptor lead is a pain car manufacturers are gits they don't even provide a cd player or spare tyre anymore just cost cutting
stephanie wrote on January 17, 2023 - 4:42pm Permalink
this is the stupidest thing ever. Its hard enough not having a cigarettes' lighter port to charge my stuff, I have a usb charger port instead. Its so governed too. I hate it so much. I just want to charge my stuff and now this bs