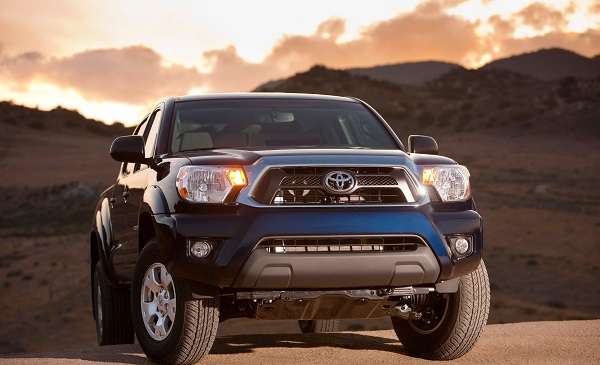 Will Toyota let Tacoma wither on vine like Dakota and Ranger?

In the past, popular compact trucks were left to die in order to allow full-size trucks to thrive. Is this Toyota's plan?
Advertisement

The 2015 model year pickups are starting to appear and the Toyota Tacoma looks to be unchanged from last year. Yes, the new TRD Pro Series will be very popular among those who want to do serious off-roading, or look the part, but Toyota has not released any new information about Tacoma changes for 2015. Is Toyota going to let the Tacoma wither on the vine in order to let Tundra flourish? If so, we have seen this strategy before. Dodge and Ford let their Dakota and Ranger sales languish in order to make room on the production line, dealer lots, and ledger books for the more expensive full-size pickups they made.

Fuel Efficient Trucks - Canyon, Colorado. F-150
GM’s Chevrolet Colorado and GMC Canyon are going to be important new additions to the smaller than full-size pickup market. The Ford F-150 is bringing a new, lighter full size to market with an entirely new, and much more fuel efficient engine. The Nissan Frontier’s sales are also up. Will Toyota simply stand by and watch as its Tacoma sales dwindle? Apparently the company will, at least for a year or two.

Experts Have Seen This Before
Tim Esterdahl at TEC Creative Services covers the Tacoma for multiple truck publications. He too has thought of the scenario we outlined. We asked him to comment on the subject, and he said “Toyota is caught in a tough spot. They can’t increase production of the Tacoma with their plant being maxed out. Yet, they don’t want to give up the sales title. This will likely mean, Toyota will make small, incremental changes to hold the sales lead while, hopefully for Toyota, not increasing market share and stealing production from the more profitable Tundra.” Tim went on to say “The increased competition in the mid-size segment is just what Toyota needed to justify investing money in the Tacoma. The truth is Toyota has been the dominant sales leader for so long, they haven’t had any drive to improve the Tacoma.”

Aaron Turpen of Torque News and CarNewsCafe covers Nissan news daily. He watches the Frontier closely and concurs with Tim’s point that Toyota now has good reason to respond. Aaron said “Toyota sees the renewed competition from Detroit as a much-needed boot in the patootie. I have heard as much from Toyota insiders, in fact.”

This story is meant primarily as a thought exercise, and these are all opinions. What is not an opinion is that the Tacoma’s sales have now been down for two consecutive calendar years, and many months running. Tundra’s sales, by contrast, are up for about the same period, and a new Tundra was launched about 18 months ago. The Tacoma has one of Toyota’s most loyal fan followings, and it would be a shame if the company lets it languish in order to allow the Tundra to flourish.

Robert wrote on August 25, 2014 - 4:10pm Permalink
Hasn't Esterdahl also reported on the testing of a new Tacoma? I understand the zero sum game Toyota, unlike other manufacturers, has to deal with when the trucks come off of the same line, but the reality is the Tundra just doesn't compete with the big boys in terms of sales. They need the Tacoma is ways that Ford and Ram did not need their smaller pickups. I think it has also been covered by Esterdahl or this site that the current Tacoma is already lighter than the incoming Colorado. When you consider the aging powertrain in the Tacoma and this sites previous thoughts on diesels and hybrids for the Tacoma, all that’s really needed is some new engines to keep the minimalist happy. Oddly, it is also the surprising success of the platinum and 1794 edition Tundras that will also fuel the desire to update the interior of the Tacoma. The sales of those packages has taught Toyota just how frivolous “cowboys” are when it comes to the “Cadillacs.” There are going to be enough midsize buyers willing to pay for a premium smaller truck even if that savings is only 5k or so. Luckily, this is where the same assembly line actually benefits Toyota. It’s not like you see a ton of Tacomas being sold on rebates. I can also tell you that in DFW, 2013 Tacomas with 17-18k in miles that are equipped exactly like mine are being advertised at $200 more than the original sticker. Reducing the availability of the Tacoma for every extra Tundra not only results in higher profit margins for the Tundra, it creates higher profits for the Tacoma since it’s less likely to creep down towards the invoice price if there are only so many in the country with the options you want, and that’s before dealers are able to rip off customers on trade ins they will certify and sale for an unseemly amount. Higher profit margins on less trucks has to appeal to Toyota even if they like to compete in the global sales race with Volkswagen and GM.
John Goreham wrote on August 25, 2014 - 6:34pm Permalink
Indeed, but I think that is consistent with the general idea we presented here, as is your analysis. Tim Esterdahl reported about a possible test mule of the 2016 Tacoma. Possible. Here is part of his summary: "We suspect Toyota will offer incremental improvements, much like they did with the Tundra. The hard facts remain the San Antonio plant isn’t going to expand, Toyota has more demand then they can currently handle and they are simply not going to take risks with this proven winner." You can read more at this link: http://www.tacomahq.com/4507/2016-toyota-tacoma-test-mule/. Thank you very much for your detailed comments. They are all spot-on.
DrLou wrote on August 27, 2014 - 7:17am Permalink
I have to agree that Toyota and Nissan pickups are very long in the tooth, however one of Toyota's big selling points is its high reliability ratings. And why are Toyota vehicles so reliable? It's because they use the same proven drive-trains year after year. It sometimes surprises me when I think that it is Toyota that leads the pack in hybrid technology because they are so conservative with their other vehicles.
Jim Butler wrote on August 28, 2014 - 2:43pm Permalink
I have a lot of respect for Toyota products over all. When I decided to down size my choice of new PU 's when I was replacing my full size PU I was naturally expecting I would buy a new Tacoma. Nope. Sits way to low for me,didn't think it road all that good in the upscale V6 version I drove along with a couple of good friends for company and opions. The drove a well equipped Frontier and loved it ! Better ride,quieter and the Frontiers 4.0 V6 was noticeable smoother at max RPMS and also had full 4 wheel disc brakes vs disc font drums rear for the Tacoma. Liked the sound from the Sound system as well better bass and cleaner sound at high volumes. I could go on but bottom line booth my bud's agreed it was the better truck. Then the clincher Nissan offered a much better deal plus a $2250 rebate. Bought the truck and love it 17-18 mixed mpg and 22+ on the highway and it has been trouble free. I bought it Dec of 2010 and it's a 2011 SV model CCab 2wd. Toyota is trading on past reputation not on its current trucks abilities and technology.
John Goreham wrote on August 28, 2014 - 4:08pm Permalink
Jim, you are not alone. Last month I looked closely at the Tacoma's sales decline for the current year to date. I then looked at the Frontier's sales increase year to date. The numbers match almost exactly. Thanks for your feedback.