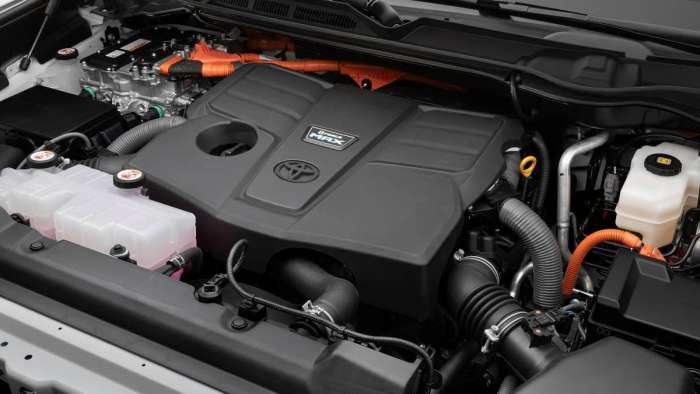 The all-new Tundra just dropped. Now let’s think about what its best feature could do for the Tacoma.
Advertisement

Toyota’s new Tundra just dropped. Now that we have that out of the way, let’s look at how the interesting new 437 hp 583 lb-ft of torque powertrain would improve the top trims of the Toyota Tacoma.

Tundra vs. Tacoma - Market Leadership vs. Participation Medals
With all due respect to Tundra owners, it is hard to care much about a truck that Toyota opts to restrict with a very limited production capacity. The Tundra is one of the lowest-selling trucks in its segment. That won’t change unless Toyota builds multiple massive new facilities. The Tundra is an intentional afterthought in many ways. By contrast, the Toyota Tacoma is the top-selling vehicle in its midsize truck segment. The perennial leader of that important vehicle class.

Tacoma’s Current Engine Offering vs. the Tundra’s New Twin-Turbo V6 Hybrid
The first cool thing about the new Tundra powertrain is that it seems likely it could drop right into a Tacoma engine bay. The displacement of the new engine is actually the same as the existing optional engine the Tacoma comes with. Unlike if Toyota had used a V8, it is likely that dimensionally it would be practical to make the new 3.5-liter engine fit in the bay now occupied by the Tacoma’s 3.5-liter V6.

The Magic Isn’t In the Displacement
“There is no replacement for displacement,” was wrong the first time it was uttered. Of course, there is a replacement for displacement. In fact, there are many. Supercharging, turbocharging, electric-assist, and a long list of other methods of making a vehicle more powerful or more capable are now in use. Frankly, battery-electric is the performance technology of the present. Failing that, throw everything else at the challenge and the results are impressive. And throwing everything else at the challenge is just what Toyota has done.

Details On Toyota’s new Powertrain
We keep saying powertrain rather than engine because much of the capability of the engine is not in the engine. Rather, it is in the bell housing of the transmission. Toyota, the company with the most hybrid experience in the history of the automobile, knows how to make hybrids work. Toyota has multiple hybrid models that top their segments in power and torque. This new truck engine uses its hybrid system to boost the vehicle’s abilities and will also add energy efficiency to the mix.

In addition to recouping energy that would otherwise be wasted from friction braking, Toyota’s new hybrid system will add gobs of torque at exactly the right time. The electric-assist of the hybrid system will add torque when the vehicle first starts out. 583 lb-ft f of torque is more than double the torque that Toyota’s current engine makes at 4,600 RPM. Expect the new engine to make its peak torque at around 1,500 RPM. If you like diesel engines for their torque curve, you will love a twin-turbo hybrid much much more.

A Chance To Correct Tacoma’s Biggest Problem
Toyota’s Tacoma transmission issues have become legendary. For whatever reason, Toyota’s past transmission gave many owners fits. The new powertrain that Toyota just dropped has a new 10-speed. Nothing like a fresh start to make things right. Fix the seating position, add in the new wireless Android Auto and Apple CarPlay the new Tundra has, and the Tacoma would be assured that its leadership position in the midsize truck segment would last another generation.