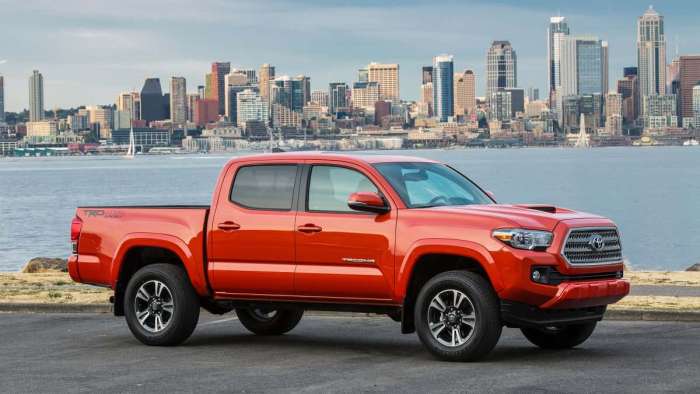 Shopping For a Used Toyota Tacoma - The Problem Years to Avoid

The Toyota Tacoma is a legendary great used truck buy. However, there is one year used vehicle experts warn you to watch out for. Here's why.
Advertisement

Toyota's Tacoma pickup is unique in the automotive world in many ways. Long the leader in its segment in terms of sales, the Toyota Tacoma has always commanded a robust resale value price in the used market. Used Tacoma shopping is tricky because there may not be much of a discount compared to a new Tacoma. The reason for the great resale value lies mainly in the truck's dependability, quality, and reliability. But not all used Tacoma model years are as reliable as others.

Toyota Tacoma Transmission Problems
The Toyota Tacoma entered its third generation with a solid track record of reliability. Many who watch the quality of automobiles are aware that new model generations often have some bugs in the first model year or two that the automaker later sorts out. In the case of the third generation, the Tacoma developed some problems with the automatic transmission that gave some owners fits. The Toyota Tacoma transmission problem was addressed by a technical service bulletin (TSB). However, many owners later reported they still were unhappy. The issue was that the transmission hunted for gears, and had trouble with hills and even shifting from park to drive.

Owner Complaints About Used Toyota Tacomas
Due to this problem, CarComplaints.com, a website that catalogs owner complaints about vehicles in a graphical format, warns shoppers to avoid the Tacoma. In fact, the site labels the Toyota Tacoma with its "Beware of the Clunker" stamp of disapproval in one model year.

Consumer Reports members have also weighed in on the Tacoma. One model year is rated the lowest possible one of five stars by owners. It was not the transmission that earned this low score, but other issues including brakes.

Toyota Tacoma - Years To Avoid
CarComplaints shows a steep spike in owner-reported complaints in the 2016 model year Toyota Tacoma. The transmission is the issue here. One used Toyota Tacoma owner wrote in and said, "After getting the ECU update for the 2016 Tacoma erratic shifting issue, it started failing under hard throttle from a dead stop. The RPM's go from about 800 to 2100, then back to 800, then it will fully accelerate. This happens under mid throttle/hard acceleration. Feels like a failed torque converter."

Another used Toyota Tacoma owner told CarComplaints, "First I would like to say I love everything about the truck except the transmission. That being said this transmission is terrible. It has very bad shift points and they are never the same. My transmission started slipping until it warms up now that the cold weather is here. My truck has been in and has had a reflash to the ECM. It had an orbital issue where it lost all control and went into neutral coming down a hill into a left turn when I gave it gas, the RPMs shot up and it took 1 minute to reset and act like it was in drive again, terrifying. I had the dealer here this morning to see the slip and he said its possible the fluid level. I have 3 videos of it happing."

The used Toyota Tacoma is a very reliable truck. If you plan to shop for a used Toyota Tacoma we suggest that a longer than typical test drive may be in order if you want an automatic. There were manual Tacomas, so if you like a stick shift, that seems like a good option.

If you own a Toyota Tacoma from the model years that CarCompalints and Consuer Reports have rated lower than perfect, please tell us your experience in the comments below. Your experience may help a fellow owner.

Jack wrote on August 6, 2020 - 4:44pm Permalink
Regarding the transmission problems with the 3rd generation Toyota Tacoma -- I've got a 2017 double cab long bed, and the 6-speed auto trans is really poorly programmed. The truck is a headache to drive in hilly terrain, and even against a headwind. It continuously hunts around for gears, and is normally in the wrong gear. At highway speeds it is always in too low a gear, with scary high engine rpm's, while below 35 mph it is exactly the opposite, hanging in a high gear and forcing rpm's down to a ridiculous (and damaging) 800 rpm! Other problems include sloppy, lurching shifts and complete absence of 5th gear. The dealer says there is no way to fix or adjust the trans, and won't even check the fluid level, which is sealed and very hard to get at. This is not a good vehicle to buy used, as the engine is often forced to run at over 5,000 rpm for many miles, and therefore will wear out early.
Gene wrote on August 21, 2020 - 8:15pm Permalink
Did this same problem also affect the 4Runner in the same years? I'm looking at buying 1 and would like to know this prior to purchasing. Thanks
Bodie Jack wrote on August 24, 2020 - 2:55pm Permalink
Gene --- I don't think the 4Runner has been subject to the same problems, and 4Runners continue to get good reports for reliability. They have not been built on the same platform as the Tacoma for quite a few years, now being more closely related to the FJ Cruiser. I don't know how similar the transmissions are, but the 4Runner has a totally different engine than the Tacoma: The 4Runner uses a hopped-up version of the old, weak-but-reliable 4.0 liter, while the Tacoma since 2016 now has the 3.5 liter Atkinson-cycle, which is not as good. The main difference may be that now the Tacoma is built in Mexico, where quality control is non-existent, while the 4Runner is still made in Japan. I'd say buy that thing if you can get a good price.
Anthony Garcia wrote on October 31, 2021 - 10:24am Permalink
2016 Tacoma TRD Sport having trouble after driving 15 minutes it start to stutter like backfiring, transmission going to neutral, losing power for seconds, and bugging down? I had it towed when it stop turning into drive thru restaurant when traffic was behind me! This happened after transmission oil replaced due to same complaint I had above. Does anyone have the same issue? Dealer blaming the after market K & N Intake and Exhaust but the problem is that I had it for 2 years before this problem!