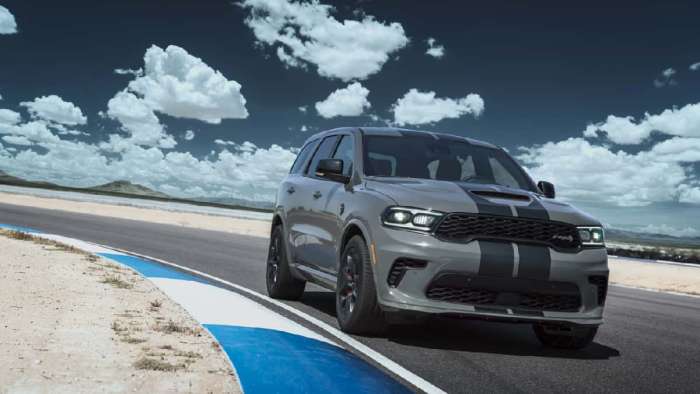 The future of performance vehicles will be electric. We chatted with FCA America's Head of passenger cars, Tim Kuniskis, to learn why internal combustion engines' days are numbered.
Advertisement

For those who don't follow the pinnacle of performance vehicles daily, Dodge recently released the latest in its ongoing string of ultra-performance street-legal machines. The 710 hp Dodge Durango SRT Hellcat dropped surprising exactly no one who follows the SRT sub-brand of Dodge. FCA's Dodge and Jeep brands have created so many new performance variants using the exciting 700hp+ Hellcat engine that really only our editor and Hellcat owner, Patrick Rall, can keep track of all the options available.
Related: 2018 Jeep Grand Cherokee Trackhawk - 3 Biggest Surprises On Track
For those who want the best performance machine money can buy, FCA is the automaker with the best vehicles in a wide variety of segments, such as two-door Challengers, four-door Chargers, two-row crossovers like the Jeep Grand Cherokee Trackhawk, and now the larger Durango SRT Hellcat.

During a recent video conference with Timothy Kuniskis, Head of FCA Passenger Cars – North America, we learned more about the Durango. However, this writer's ears perked up when Mr. Kuniskis was asked to comment on electrification. In fairness to FCA, Dodge, and Mr. Kuniskis, this question was off of the agenda, so to speak. To his credit, the question was answered in full, without preparation or reservation.

A little background on Mr. Kuniskis is in order before we begin. Allpar, a performance publication focused on Dodge and FCA vehicles, notes that Mr. Kuniskis “helped bring the Hellcat cars and the Demon to market,” when he was head of FCA passenger cars previously. He is known as a car-guy who attends a lot of performance vehicle events on his own time.

When asked what his opinion of the electrification of cars is, here is how he replied:

Like most modern performance vehicle fans, Mr. Kuniskis is pro-electrification. He said, “It's funny because somewhere along the line, I got typecast as this muscle car guy and so people ask me about electrification thinking that I'm going to be negative on it. I am super positive on electrification.”

Most folks in his position would end the answer there and get back to the Durango topic, but not Mr. Kuniskis. He next explains how he formed this opinion, saying, “I think electrification is the next performance enabler way beyond anything that we've accomplished up to this point. Because I tell everybody performance is not going away, just how we get there is going to change. It's going to be like when we transitioned from carburetors to fuel injection and all of a sudden overnight it went from ‘I don't want fuel injection,’ to ‘I have to have it.’"

So, does Mr. Kuniskis regret that internal combustion engines are about to ride off into the sunset? Not at all, “It's the best thing in the world for performance,” he says. Given that opinion, why doesn’t FCA simply shift to electrification for all of its Hellcats and other performance models now? Mr. Kuniskis explains that it’s all about dollars and cents. “And the reason I say that is right now, kilowatt per hour, batteries, electric motors, all this stuff is extremely expensive and doesn't allow us to get to the price points that we need to be at. Today we sell our most popular car, Charger and Challenger, by far hands down best bang for the buck is the Scat Pack. And you've got to be in the mid‐$40,000 range, 500‐horsepower, that car, 40 percent of our volume. It is absolutely the sweet spot. You can't get to that price point with electrification for performance. You just can't.”

Mr. Kuniskis concluded by saying that he sees affordable performance following mainstream adoption by the auto industry overall. “…the cost of that technology is going to come down so far because of all the volume in the mainstream that the performance application, the performance crazies out there are going to be able to buy this stuff cheap and then figure out how to tune it for performance instead of for economy."

Tesla and Jaguar have proven that electrification works with vehicles priced in the luxury range. That is no longer in question. Based on the insight from top product planners and executives like FCA's Timothy Kuniskis, it is apparent that the future of affordable performance is also going to be electric.