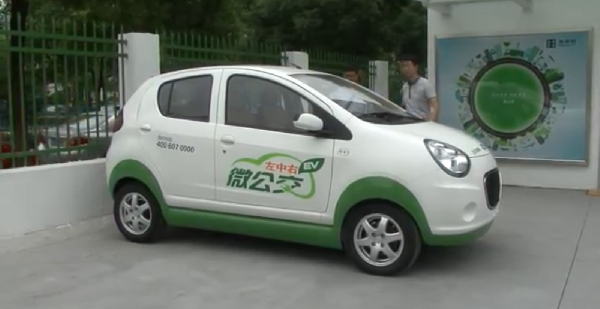 This is a vending machine for tiny shared Chinese electric cars

China is turning to EVs to help offset problems it blames on cars. One company thinks small EVs dispensed from vending machines will help the country meet its environmental goals.
Advertisement

In order to solve a problem, one must first be created. In China, many see cars as the source of the air pollution that many Americans first became aware of during the last Olympics held in its capital. In order to combat the air pollution in cities the government is pledging to put 2 million EVs on the roads by 2020. In a very interesting and well done YouTube video mini-documentary, Aaron Rockett explains that China plans to support the push to put these EVs on the roads with 400 billion yuan (the value of 1 yuan is about 1/6 of a dollar according to Google’s currency translator).

That support equals about $32,000 per EV if our math is correct. It seems plausible since in the US the combined federal and state governments collaborate to support EVs with a minimum of $7,500, and in some states like California with its EV credit system and other tax incentives, as much as $20,000 per EV. Those are just the direct subsidies not including factory supports and things like helping to pay EV factory utility bills with tax dollars.

One company taking full advantage of the Chinese program is the NASDAQ listed Kandi. Kandi is involved with many EV programs, but the one highlighted in this video is a car-share and lease program. The cool hook of course is that in some of Kandi’s locations the cars are stored in what looks like a car-vending machine. These machines are very cool, but certainly not new or unique to China. I first saw them in widespread use in the 1990s in Japan, but they have long been part of all large cities like New York. Let’s not spoil the fun, the Kandi cars are little, round, and they look just like those two-piece plastic containers kids’ toys come in when you put quarters into the vending machine on the way out of a supermarket.

The cars featured in the video are not actually what we call “cars.” In the US they would be categorized differently. Here they would be called NEVs or neighborhood electric vehicles. Capable of decent range, about 90 miles according to Rockett, and speeds up to about 50 MPH, they are really a cross between a golf cart and a micro car. In the video they are referred to as similar to Smart Cars, but in fact Smart Cars’ EVs are much closer to real cars. For cities the NEV is a perfect application of EV technology. NEVs don’t need to meet the same safety standards as cars and can be made much more inexpensively and also much lighter. Don’t take that comment as meaning they are not safe. Safety is relative, as the video clearly illustrates at time stamp 2:58 in which a family boards a scooter and heads into city traffic with the dad driving, mom on back and the little girl standing on the scooter, all without helmets of course.

Here at Torque News we can sometimes be cautiously pessimistic when it comes to EVs. Videos like this tend to be made to show how a problem (real or imagined) and its cause (real or imagined) can be solved so simply through innovation and the application of electricity to transportation. Here are some things that would have helped to balance the story. Beijing is near the Gobi desert and much of its seasonal pollution is not from combustion of any type. In fact, it is sand and dust according to The Weather Channel. Also, in Beijing much of the electricity that powers the grid is made from 4 coal fired plants. And those are just the plants that are actually in the city itself. They account for 40% of the coal used by the city. The plants are scheduled to be replaced by natural gas fired plants, which will reduce pollution. Note that 60% of the coal used is not used by power plants.

The part of the story I liked best was that there are already 120 million EV scooters and motorbikes in China. Continuing that trend seems to make a lot of sense. Gas powered scooters are shockingly polluting compared to a modern gas powered micro car. The country was previously a scooter and bike country, and only in the past decade has the automobile become a viable option for what is sort of a communist country. General Motors now builds and sells more cars in China than in the US. In China the joke goes “How do you say luxury car in Chinese? Byuw-ick.”

We hope you will watch the video. If you like it tell us what you think of such a program being adopted in the US in the comments section below.

Image and video courtesy of Youtube.com and Aaron Rockett