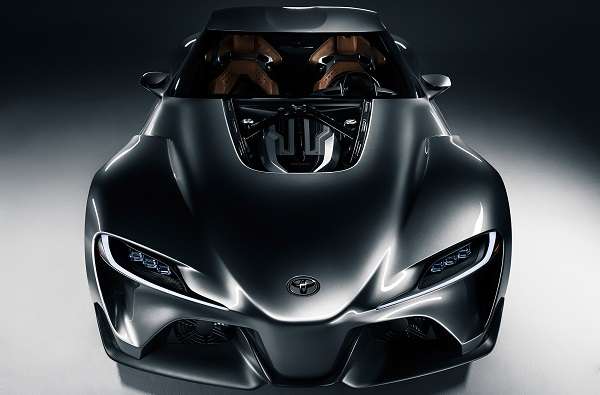 What class of car will the Toyota FT-1 be and what engine will it have?

Toyota has not yet confirmed what the drivetrain in the new FT-1 Concept will be. What it packs will help determine what class it will be in. Here’s what our experts guess.
Advertisement

Despite rumors on the internet that the Toyota has a firm drivetrain picked out for the FT-1 Vision concept, Toyota has not yet said. The basic car is a coupe and rear drive. This we know. The rest is conjecture and unconfirmed rumor. However, we can pick apart some of the things that Toyota has said about the car to find some clues. The engine compartment has a fake engine cover in the photos, but just its size and layout also provides a clue.

What Toyota Has Said About the FT-1
In an early press release Toyota said the car is “heavily influenced by Toyota's long sports car tradition that includes vehicles such as 2000GT, Celica, Supra and most recently, FT-86 (Scion F-RS).” So if this is the inspiration, all evidence points to the FT-1 not being an Acura NSX or Nissan GT-R competitor. That would be a relief. About 14 crazy-rich people a decade buy those cars, and I am never going to be one of them. I have, however, owned a Supra and would consider one again. So I hope that the inspiration does predict the future.

In a later release Toyota made the inspiration of the designer more clear with this direct quote of Alex Shen, Calty’s Studio Chief Designer. Alex said, “Our team was heavily influenced by Toyota’s sports car past, especially Celica and Supra, and we sought to capture some of that history. It is an aggressive, track-focused sports car concept with a presence that has been amplified for shock and awe.”

This actually muddies the waters. Neither the Celica nor the Supra, nor the Celica Supra for that matter, were really track-focused cars. They were grand touring cars, and some of the best ever built, certainly in the top few for their generations. If the new FT-1 is to be “track-focused” it may not be a true GT, but harder-edged.

Past Engines, Current Engines, Actual Engines
The Celica always had a four cylinder engine. For a time, it was turbocharged, but those few cars sold terribly in the US market. The Supra was always an in-line 6-cylinder engine. Some were turbocharged, and those became legends. Compare a last-gen Supra to a BMW 435i; Rear-drive coupe with 2+2 seating, in-line turbo 3-liter six, 300HP (320 for the Supra). Why is everyone so impressed by the BMW? Toyota sold that car literally 20 years ago.

Currently, the F-RS as Toyota types it sometimes, has a boxer four-cylinder engine. It is the one let-down in the whole car. No torque. Don’t expect that blunder again. Toyota/Lexus also have a splendid 3.5-liter V6 that generates about 306 horsepower in cars like the IS 350 and coming RC 350. That would be a good engine for a car this size. However, that engine has been around a long time, and we suspect Toyota would prefer to move forward with smaller displacement, turbocharged engines.

The New NX 200t has a gem of a 2-liter turbocharged 4-cylinder. We drove it a few weeks back, and it was wonderfully smooth, powerful and compact. Toyota could already have built a hotter version of that engine with about 250 horsepower and 275 ft-lb of torque. That would move the smallish FT-1 down the road with authority and not threaten the dominance of the coming RC F.

That leads up to the elephant in the room. Toyota has a kick-butt and take-names V8 with about 420 HP ready to go in the RC F. I will drive that car and engine in 2 weeks on a racetrack in NY. I say no way would Toyota drop that into the FT-1. Why compete with your own premium division?

Our Expert Panel Makes their Picks
Tim Esterdahl of TEC Creative Services, truck expert and occasional TN contributor, says it will be the NX engine. He says that the V8 is too much for the car. I can't argue his logic.

Aaron Turpen, founder of CarNewsCafe, Nissan expert and GT-R fan, says the easiest path for Toyota “…would be to take the engine out of the outgoing IS-F. That's a big V8 that would be perfect in this car. Other speculation would revolve around V6s in Toyota's stables and honestly, they have nothing to compete with the GT-R's bad boy right now.“ Aaron points out that there is a donor engine available for the prototype since an auto writer wrecked the press fleet IS F recently (not one of our team). Actually, there are two donors because I also witnessed another IS F be crashed by an auto writer on a racetrack.

Patrick Rall, Editor at Torque News, argued with Aaron about the possibility of a V8 (we all argue pretty much for the sake of it). Patrick says it could be a V8, but “…wouldn’t be surprised to see a big, boosted V6 similar to what the GTR uses...just not as potent.”

Author's Guess About Toyota FT-1 Engine
My guess is that Toyota needs this car to cost less than $50k. That is where the RC 350 will be priced. To come in under that price point, Toyota needs to either use one of its already built engines, or source it from another place where the engine has decent volume. My brain tells me it is the 2-liter turbo from the NX, but modified to produce about 250 HP. However, my heart says no. That long engine cover, starting so far back in the engine bay, makes me think back to the Supra. My heart says it will be an in-line six cylinder engine with a twin scroll turbo. I hope that it is an original design from Toyota, but I would not be shocked if the engine had some connection to BMW. I would however be heartbroken.

Aaron Turpen wrote on August 19, 2014 - 6:06pm Permalink
I still say V8. They already have them, they aren't expensive, and there's plenty of room for one under that almost saloon-ish hood.
John Goreham wrote on August 19, 2014 - 6:26pm Permalink
'Yoda could keep the cost down and drop the Tundra's 350 CID V8 in that car....Stranger things have happened. Then Lexus could keep the "refined" V8.
daniel Allen Dailey wrote on April 12, 2016 - 3:40pm Permalink
As mush as people would love to see a nice and powerful V8 under that hood, V8s do have their downfalls. Also if you think about it toyota said they wanted the car to cost less then 50k, in order to manufacture enough V8 enigines to make a.......series of this new model or a continuation of the supra they would have to spend more money hen they would like and then the car would also cost more then they like. if you think about it the inline 6 with whatever mods they have on it may sell better anyway because of many reasons. one of them being the fact of gas mileage and yes i know people who are going to be driving this car are spending more than likely around 40-45k on this car so gas mileage does not really mean anything. Also the bigger V8 alson means more weight and more weight means more tweaking in the steering systems and more teaking in the suspension to support the extra weight and also weight distribution bacause the car may be rear heavy and they need to redesign the car in order to make the car less heavy in the back or vise-versa. Even though the car would over all be pretty badass to be seen with a V8 and single turbo roaring down the highway or in a grumbling idle at a stoplight, it may be a little impracticle unless Toyota plans on using these cars as some sort of race or show cars.
irish supra wrote on August 20, 2014 - 12:14pm Permalink
Engine will be the 2URGSE (IS-F) power plant, but in twin turbo form (650hp) which was developed 2 years ago by Toyota Motorsport in Germany as an excercise to see if the tech gained in the F1 development could be appplied to toyota production cars. Google TMG 650 :)
Michael Morgan wrote on September 5, 2014 - 4:22am Permalink
It's gonna be a BMW engine. so i'm just hoping they take the inline six from the m4; that would be more than sufficient enough.
Carlos Perez wrote on May 28, 2015 - 7:00pm Permalink
If this thing has a German heart it's going to be something special...
Christian Sola wrote on June 15, 2015 - 11:20am Permalink
My guess is a increased output BMW inline six, with higher strength power producing parts, increased compression ratio, and increased displacement from a larger bore, etc. allowing the car to produce around 410~ hp. for about 77-84k $. I think this is the 'Toyota GT3' . Redline prediction, 8,400 RPM.
vedyot wrote on March 16, 2016 - 11:35am Permalink
as long as they call it 3jz i'll have no complaints.
Rameez naqvi wrote on May 27, 2016 - 11:49am Permalink
This supra successor should have 2jz-gte with some improvements .......producing more than 900hp....there must be a good gearbox like dual-clutch or DSG type....the this car's really good!