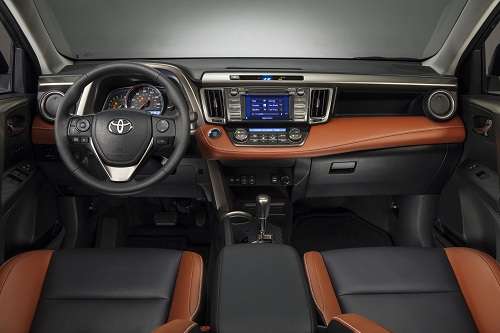 Toyota RAV4 vs. Mazda CX-5 driving report changes our view on these crossovers

We drove the hottest new compact crossovers to see which has better real-life performance. Our testing contradicts other experts.
Advertisement

In the compact crossover segment there are two hot new contenders. The all-new 2013 RAV4, which created the segment, and the 2014 Mazda CX-5 introduced last year. Recently, we reported on Consumer Reports’ opinions of the two, and we promised our own driving test. Our results are quite different from Consumer Reports and some other publications we trust. We drove the RAV4 Limited and the CX-5 Grand Touring, which are the top trims of these vehicles, to see if we could find distinct differences in how they feel in actual use, and we did.

Before we go too far let’s clear one thing up. At this price point, which is about $31,000 for the fully loaded version of both these vehicles, there is no truly sporty product on the market. In order to get any kind of real performance one needs to spend at least $10,000 more and move up to the much more powerful, and slightly larger, BMW X3. At 3600 pounds, with a high venter of gravity, and less than 200 horsepower, these vehicles are enjoyable to drive around town, or even on some winding back-roads, but forget them being sporty. They are simply not. That said, they do have their own distinct personalities and both provide a very nice ride. Car and Driver called the CX-5 “A Miata for Moms (and Dads).” As a long-term owner of a current generation Miata (and a Dad), I think that statement is just crazy.

Driving the RAV4 and CX-5 Back to Back
In the Consumer Reports and other reviews we have read, the new Mazda engine, a 2.5 liter four cylinder with 184 HP drew raves. We are not sure why. We think it is because the previous, 2.0 liter engine was so ridiculously underpowered. The new engine is fine for the class, but it does not stand out in normal driving from the RAV4’s, which has 176 horsepower. Both have 6-speed automatic transmissions, but they perform differently, and that is where the key driving difference is.

Our testing was done at Bear Mountain, New York. We drove these cars literally on the twisty mountain road everyone talks about as the perfect place to drive. Heading up the mountain in the CX-5 we found it difficult to keep the car in a low enough gear to handle the challenge. It wanted to up-shift to save gas. So we let it and we were unsatisfied. We were either lugging the engine and driving slower than we wanted, or when we pressed the gas sharply enough to engage a more powerful gear it would shift down and roar ahead , then drop back to the too-weak gearing. Frustrating.

There is a built-in solution to this and both cars have a similar feature. By simply nudging the automatic shifter to the side one can use the shifter to up and down shift, and the car will hold whatever gear you choose. We nudged the CX-5’s shifter and it did nothing. It was still in gear 6. So we down shifted and controlled it ourselves. However, when we would stop, for example at a stop sign, it would allow the engine to use all six gears again.

The RAV4 has a simple but important difference. First of all, subjectively we found the RAV4 was better able to stay in an appropriate gear and not lug the engine by always being in gear 6. That alone is an improvement over the CX-5, but wait. When we used the shifter to allow us to take control of the gearing, the nudge results in the RAV locking out 5th, and 6th. In other words, it is smart enough to know that if you are going to be shifting yourself it should at least drop into 4rth. In fact, that was really all it took. Simply by moving over to the manual shift mode the RAV4 was now enjoyable heading up a steep series of hills. We didn’t even need to shift ourselves. It would downshift to second or third when needed and work its way up to 4rth and then hold fourth. 5th and 6th are both highway gears for these two vehicles and the RAV4 is smart enough to know that. If you want 5th or 6th you can nudge the shifter to shift up to those gears (we tried, of course). The Toyota folks built in a real life advantage here.

In the twisty sections we found both to be about the same, which is to say quite nice. These will not be mistaken for a compact sports sedan, but they handle well and don’t lean too much in corners. In fact, they would compare well to any similarly priced family sedan. If one were to go too fast into a sharp turn with either of these (within reason) one would find there was a lot more turning ability left in the vehicle than one thought, and would simply steer out of trouble. These both have more ability in reserve than one would normally use or need.

RAV4 Advantage
There is also one other big difference between these vehicles. Even though these two cute-utes have almost identical outside dimensions, the RAV4 is much bigger inside in terms of actual usable space. The difference is dramatic. I am 6 feet tall and about 190 pounds. I didn’t really fit into the CX-5. My right leg was always in contact with the console. The area where legs go was too narrow. I could live with that, but why should I? In the RAV4 the console is designed differently. There is no center tunnel coming out of the dash between the driver and passenger where their knees would be. Instead its dash is more side to side and up higher (photo). My legs fit very well.

Furthermore, when I adjusted the driver’s seat in the CX-5, I could not then sit behind myself in the back without my knees hitting. And I don’t put the driver’s seat all the way back. There was more room to put it back about 3 or more inches in both the CX-5 and RAV4 after I got comfortable. In the RAV4 I had at least 2 inches of legroom in the back row behind the driver’s seat. I could even put the passenger seat all the way back, and then sit comfortably behind that seat in the back. In the CX-5 this was impossible. There was just no legroom. The upshot of this is that one vehicle is able to fit a tall dad with teens comfortably in back, the other simply cannot. Advantage RAV4.
One other area that the RAV4 excels is the sound system. The navigation package includes JBL audio. It is simply put a much better audio system than the CX-5 came with.

Mazda CX-5 Pluses
The 2014 CX-5 is a great looking compact crossover. From the front and the sides it is simply the best looking in the segment. It looks good from the rear as well, with dual exhaust and a clean look, but it looks small. That is not a bad thing unless you don’t want to be reminded it’s small. The RAV4 looks bigger from the back, but it is spoiled by a single exhaust pipe which you can see hanging down when you drive behind the RAV4. This is a Toyota thing and the older Camry’s had the same dangling pipe look. The RAV4 also has more matt finish plastic trim around the wheel wells and a wider strip on the front and rear bumper. One wonders if that will bleach from the sun and look cheap shortly after purchase. The CX-5 looks richer and more expensive parked next to the RAV4.

Braking went to the CX-5. We didn’t measure stopping distances, but we have researched it and know they both are almost exactly the same. They stop well, but the CX-5 has a much better brake feel. The RAV4 has more pedal travel and it feels like stepping on a sponge versus a tennis ball in the CX-5. Don’t take this as a reason not to buy the RAV4. You wouldn’t notice it unless you were jumping in and out of them in turn.

The interior of both is very nice. If you look very hard you might find some things to complain about, but that is true of cars costing much more. The seats in the CX-5 are perforated leather with heat. In the RAV4 they are not leather, but rather a new material that is simulated leather. As a child of the ‘70s I call that Vinyl. BMW calls it Leatherette and uses it on cars costing fully $15K more than these. Toyota calls its fake leather SofTex. It is not perforated. It looks and feels good, but nothing beats real leather done right and in the CX-5 it is. Unless you think that is mean to the cows, and more and more people do think that. Both had great power seat adjustment. It should be noted that Lexus is planning a version of the RAV4, and that could be the reason Toyota is saving the leather treatment.

It is important for readers to know that both of these compact crossovers have tons of headroom. And both feel pretty large inside from the driver’s seat (other than the dash hitting your leg if you are tall in the CX-5). They look smallish parked next to a Highlander size sport-ute or Mini-van, but once you are inside, both feel big and safe. Both aced their standard crash tests. However, it should be noted that the RAV4 has not yet passed the new small frontal overlap test (as the Subaru Forester has) and the Mazda CX-5 was tested but did poorly, scoring only a “Marginal” rating. Buyers considering a new RAV4 may want to wait. Here is a quote from the Insurance Institute for Highway Safety posted May 16th “Another small SUV, the 2013 Toyota RAV4, earns TOP SAFETY PICK, but it won't be put through the small overlap test until later this year. Toyota asked for the delay so it could make changes to the RAV4 to improve performance in the test.”

The luggage area seemed almost identical when we parked them side by side with the hatch up. Both have a compact spare in the same location with lots of great nooks for stuffing flashlights, and items like that.

These two vehicles have gobs of goodies and features. We will let you discover those for yourself and leave this article to focus on what they feel like in use. The RAV4 has some clear advantages in usable power and space, The CX-5 is the looker of the two, but both have their advantages and disadvantage inside. Either of these vehicles are so good for the class it is hard to pick a distinct winner, so we will leave that to you.