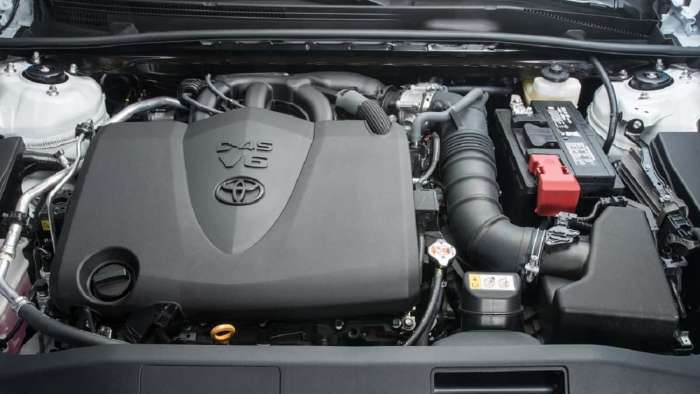 Recalls happen daily for every manufacturer, of every type of vehicle. However, engine recalls are one of the trickiest for owners to deal with. A paint defect on your Toyota or a melting dashboard in your Lexus can wait until the next oil change. A defect that will stop your car or cause a fire cannot. Toyota's latest gasoline engine recall is a massive one. Almost 2 million owners will be affected.

Toyota Fuel Pump Recall
The newest recall from Toyota is so huge that it impacts almost every major model it makes under its Toyota and Lexus brands. It includes the Lexus LS 500, LC 500, RC 350, RC 300, GS 350, IS 300, ES 350, LX 570, GX 460, RX 350, NX 300, RX 350L as well as the Toyota 4Runner, Camry, Highlander, Land Cruiser, Sequoia, Sienna, Tacoma, and Tundra, Avalon, and Corolla. (Toyota Prius owners dodge this bullet) Please allow us a quick break to rest our fingers from typing that incredibly long list of Toyota vehicles under recall. OK, thanks.

What struck us as we prepared our report on this huge recall of nearly two-million vehicles that Toyota families rely on for daily transportation is that if these vehicles had been electric vehicles, the recall could not have happened. That is due to the simple fact that battery-electric vehicles don't use fuel. So they don't need a fuel pump.

Modern fuel pumps are marvels of modern mechanical and electrical engineering. First of all, they usually reside inside the gas tank. Imagine; a machine sitting inside of a pool of explosive liquid powered by electricity. Sounds safe, right? The pump lives its life submerged in gasoline and produces up to 200 pounds per square inch of gasoline pressure to force that gas into the fuel system of your vehicle. The pressure is needed to help atomize the fuel as it enters the injection system where it converted to energy and carbon dioxide to help warm the planet. Toyota's recall is due to all of this not happening. When it does not happen, the car won't go. Toyota points out this can be a problem on the highway.

Electric Vehicle Simplicity
Battery-electric vehicles are not simple machines. They have enough code to boggle the mind of an engineer from two decades ago. They work using electrochemical reactions. They still have the futuristic infotainment systems, myriad sensors to help you drive, and blinding light-emitting diode headlight assemblies that can cost as much as $3,000. All of those things can and do fail. And they are recalled. Mercedes just had a recall on the battery of one of its EVs this past week.

Still, the drivetrain of an EV is much simpler in its operation than an internal combustion engine. In most EVs, there is also no transmission. So no transmission to fail. Subaru, Honda, and pretty much every other manufacturer, has had recalls on their most modern transmissions. Wouldn't it be nice if your next car had far fewer parts to fail?

Toyota's Recall Fix For Fuel Pump Defect
We wish we could tell you precisely how Toyota will fix the problem in about two-million of its cars. The problem is, Toyota doesn't know. Here is Toyota's statement on the fix: "Toyota is currently investigating this issue and will be developing a remedy. When the remedy is available, there will be no cost to vehicle owners. All known owners of the affected vehicles will be notified by first-class mail by mid-March." So watch your snail mail for a solution to a problem that Toyota says, "...can result in a vehicle stall, and the vehicle may be unable to be restarted. If a vehicle stall occurs while driving at higher speeds, this could increase the risk of a crash."

UPDATE: There is an update on this story courtesy of Toyota that you can view here.

Going forward, we will look for opportunities to highlight recalls and defects in vehicles that would not have occurred had they been of modern, all-electric drivetrain design. Tell us your thoughts on EVs in the comments below.

Paul wrote on March 6, 2020 - 11:23am Permalink
Really? Really! And the premise that electric vehicles will not have massive recalls once there are millions on the road is just as ignorant as the headline.
Saulgallegos wrote on March 7, 2020 - 2:46pm Permalink
I can't believe it , what happening toyota
MS wrote on March 7, 2020 - 7:26am Permalink
This is likely the dumbest premise for an article I have stumbled upon in some time.
willus lewis wrote on April 21, 2020 - 1:41pm Permalink
You're making a huge mistake here. The primary hi-pressure fuel pump is in the fuel tank. The object in question is the LOW-PRESSURE fuel pump located in the engine bay. This returns unspent fuel to the tank.
MJB wrote on May 31, 2020 - 9:54am Permalink
Critical thinking and objective writing are not your forté, John.
James R Barnett wrote on November 1, 2020 - 8:05pm Permalink
EVs are a poor solution actually. They rely in limited supply rare earth elements like lithium. The majority of the world's reserves of this material are in Russia and China. The US has some reserves in Nevada, but the cost of extracting lithium in Nevada, and the managing the toxic mining waste the process generates is prohibitive. Bottom line, there's isn't enough lithium to build batteries in sufficient supply to replace all ICE vehicles. And when your Tesla's batteries lose capacity safely disposing of those huge toxic batteries is an environmental nightmare. So without some massive revolution in battery technology and density, EVs relying on batteries are a dead end. Hydrogen fuel cells make a lot more sense. Hydrogen is the most plentiful element in the observable universe. Extracting hydrogen from water is simple. The only rub is developing a hydrogen fueling global infrastructure and safely managing hydrogen refueling. And EV technology is poorly suited to the dominant North American vehicle class, the full size truck. Trucks are heavy. Electric trucks are much heavier than ICE alternatives. Trucks bear loads. The heavier the mass the structure has to carry, the lower the cargo load capacity. The heavier the truck, the worse it handles. The heavier the truck the worse it is on soft surfaces like offroad routes and job sites. E-trucks are trucks for people who don't really need trucks now know how to use them.
Ray Miligan wrote on January 17, 2021 - 2:57pm Permalink
the headline should have said , the recall wouldn't have happened if we had Flying Donkey's instead of cars !

Tesla Contemplates A New Strategy for China Retail even As Sales Boom
Jay Leno on Elon Musk & EVs: “I Think He Should Get ... Credit"
END_OF_DOCUMENT_TOKEN_TO_BE_REPLACED