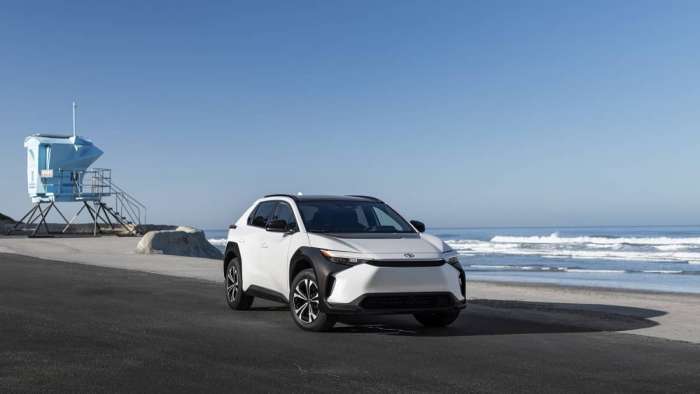 In a new press release about the bZ4X, Toyota has a warning for battery-electric vehicle shoppers in cold areas.
Advertisement

Note: This story was updated post-publication.
Toyota contacted Torque News following our publication that the company had reported 32 F as the temp at which DC fast charging may not work. Toyota says it meant to say -4 F.

One of the footnotes in the Toyota bZ4X battery-electric vehicle’s most recent press release says, “DC charging may not work on AWD bz4x when the temperature is below -4 degrees Fahrenheit.” This means that the new EV from Toyota will come to market with a significant disadvantage compared to peers like the VW ID.4, Ford Mustang Mach-E, Kia EV6, and Hyundai Ioniq 5.

What makes the warning extra concerning is that it applies to the all-wheel drive version of the bZ4X, which is the one most EV shoppers in cold areas will opt for. And the bZ4X’s EPA-estimated range in its AWD configuration is a low for the market 228 miles. However, that is in warm conditions. In the cold, that range will be reduced. Ironically, the color name of the bZ4X shown above is "Wind Chill Pearl."

This cold-weather warning may validate the opinion of those who say that Toyota rushed its EV to market after missing the market shift to battery-electrics. Toyota is only now about to launch its only battery-electric crossover in nearly a decade. Its two prior BEV crossovers were both low-volume Toyota RAV4 EVs sold in limited markets. The new bZ4X seems to be a broader effort that will have siblings made on the same basic platform underpinning many models sold by the Toyota, Lexus, and Subaru brands.

DC fast charging is quickly becoming the standard for public charging. The reason is that Level 2 charging doesn’t offer a power delivery rate that makes short charging stops worthwhile. For example, we have charged multiple vehicles using Level 2 public chargers for about 20 minutes, and the added charge is only about 7 miles of range. Worthless really.

Most EV owners charge their EVs at home most of the time. However, on trips out of town or on long road trips, DC fast charging is necessary in order to keep going in a BEV. While the new Toyota bZ4X certainly looks like a fine automobile overall, the fact that Toyota has so many severe warnings about charging it using the defacto standard public charging method leaves us wondering if the vehicle is really a viable contender in the broader green crossover marketplace.

Our understanding is that the battery pack in the AWD bZ4X is made by Toyota’s supplier CATL. It is a different battery than is supplied with the front-wheel drive version of the vehicle, which is made by Panasonic. Kyle Conner points out that the Panasonic battery charges a whopping 50% faster than the CATL battery in the AWD trims. Kyle summed up his opinion on the bZ4X’s battery and charging rate situation by saying it “...doesn’t make much sense to me at all.”

Subaru fans love the snow, and we bring this up because the new Subaru Soltera is a badge-swapped bZ4X built by Toyota at its Motomachi Plant in Japan. Snow-centered Subaru fans looking for an AWD electric car should take careful note of the warnings from Toyota about the way this car charges in cold weather.

Tell us in the comments below what you think about a new AWD battery-electric crossover that comes with a warning that it may not charge below -4 F.

Top of page image by Toyota. The press release referred to in this story is titled, "Five Things to Know About the All-Electric Toyota bZ4X." It was published in Toyota's U.S. Media Support Newsroom on May 4, 2022. Toyota corrected that press release on May 10th.

James wrote on May 9, 2022 - 11:42am Permalink
This is a serious issue! I have a Confirmed order for a Solterra and live in a cold winter climate with only a carport. Guess I’ll take delivery and the sell and take the profit.
jg wrote on May 9, 2022 - 4:04pm Permalink
Aside from charging concerns, the "EV System" may not even operate in extremely cold temperatures. Solterra Owner's Manual, Page 232 When the traction battery is extremely cold (below approximately -22°F [-30°C]) under the influence of the outside temperature, it may not be possible to start the EV system. In this case, try to start the EV system again after the temperature of the traction battery increases due to the outside temperature increase, etc."
john1701a wrote on May 11, 2022 - 5:33pm Permalink
That is what the traction battery heater is for. With the vehicle plugged in, it will work to keep the pack above freezing. Having that disclaimer is likely because there will extreme circumstances where it isn't able to heat to that level. The heater on my Prius Prime works great; even in the dead of winter here in Minnesota I see the pack temperature well above freezing.
john1701a wrote on May 11, 2022 - 5:38pm Permalink
"This cold-weather warning may validate the opinion of those who say that Toyota rushed its EV to market after missing the market shift to battery-electrics." It could also validate the opposite of what many have claimed, that Toyota is unwilling to take risks. -4°F is the threshold for LFP chemistry. The warning could be a clue revealing that type of lithium cell was used instead of NCA or NMC.
JoyinHawaii wrote on May 12, 2022 - 2:58pm Permalink
May be its only Toyota who is bringing all the facts to its customers and others are letting the customer find those issue themselves? After all Toyota is know for its reliability which they have built over many years and they want set customers expectations from their product right from the beginning. Any thoughts on this?