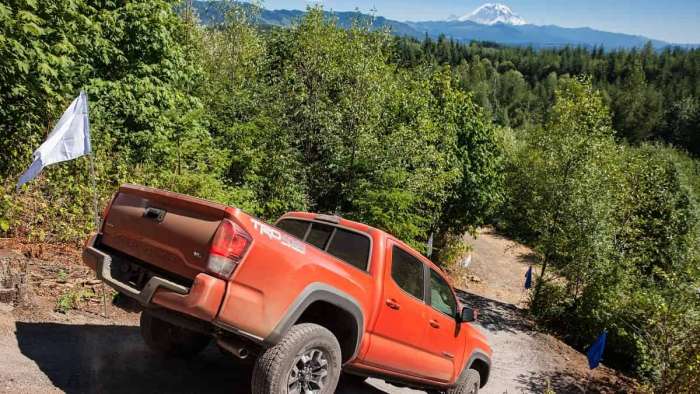 Toyota dominates this list of vehicles that owners keep for fifteen years or more. Did your vehicle make the list?
Advertisement

A new study by iSeeCars.com looking at which models owners keep for 15 years or longer shows just how dominant Toyota is in this regard. Consider the list below. 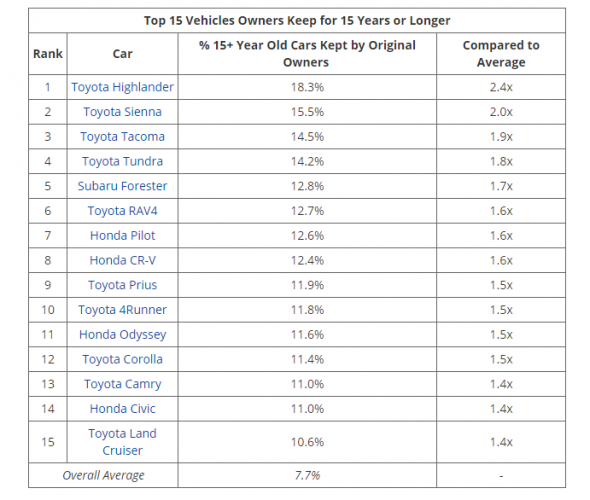 As you can see, the top four vehicles, the Toyota Highlander, Sienna, Tacoma, and Tundra top the list. However, the RAV4, Prius, 4Runner, Camry, Corolla, and Land Cruiser also take spots on the list of 15 top vehicles. No other brand comes close. Honda's CR-V, Odyssey, Pilot, and CIvic also make the list as does the Subaru Forester.

GM, Ford, and Volkswagen don't have a single vehicle among the top fifteen. “Japanese vehicles, especially Toyota and Honda, are known for their reliability and durability,” said iSeeCars CEO Phong Ly. “Owners are more likely to hold onto cars that are still dependable and don’t require a great deal of expensive maintenance.”

iSeeCars.com analyzed transactions of over 350,000 cars from the 1981-2004 model years sold in 2019 to determine which car models owners are most likely to keep for at least 15 years. “Vehicles that are kept for at least 15 years show that they can stand the test of time and likely don’t have to frequently undergo expensive repairs,” said Ly. “Those looking for a reliable and enduring car have a variety of options across all vehicle types.” Among the top 15 models, Toyota has 10 spots on the list, more than double the closest competitor.

“SUVs are the vehicles most represented on this list with seven, but the longest-kept vehicles do include a mix of additional vehicle types including pickup trucks, sedans, a minivan, and even a hybrid,” said Ly. “While American automakers have abandoned smaller cars from their lineups to focus on trucks and SUVs, the proven dependability and solid reputation of these vehicles has not only kept them in production, but helped them remain popular even amid their segment’s decline.”

Notable in the list is that the Prius is the only green vehicle to make the list. One reason is simple to understand. Toyota is in its third decade of making green cars and most automakers have barely even started to produce green vehicles. Tesla has been in business for over 15 years, but its popular Model S, Model X, and Model 3 are not yet even 15 years old.

John Goreham is a life-long car nut and recovering engineer. John's focus areas are technology, safety, and green vehicles. In the 1990s, he was part of a team that built a solar-electric vehicle from scratch. His was the role of battery thermal control designer. For 20 years he applied his engineering and sales talents in the high tech world and published numerous articles in technical journals such as Chemical Processing Magazine. In 2008 he retired from that career and dedicated himself to chasing his dream of being an auto writer. In addition to Torque News, John's work has appeared in print in dozens of American newspapers and he provides reviews to many vehicle shopping sites. You can follow John on Twitter, and connect with him at Linkedin. You can find most of John's stories at Torque News Toyota, Lexus and GM News coverage. Search Torque News in Google for daily automotive news analysis from experienced and expert automotive reporters.

Kim Mee wrote on January 15, 2020 - 1:23pm Permalink
Great to know!
Bill wrote on January 16, 2020 - 9:12am Permalink
2 things 1- my in-laws are people like that. They buy Toyota’s because they hate cars. They don’t care about driving experience, they just want something that is more convenient than the bus. Typical Toyota driver. Person that hates cars. 2-is torque need a Toyota affiliate?
John Goreham wrote on January 16, 2020 - 3:59pm Permalink
Hi Bill. You should consider reading this story that asks Toyota owners what else they own. Not sure what your second point was. https://www.torquenews.com/1083/other-cars-toyota-prius-owners-drive-may-surprise-you-dont-let-us-ruin-your-stereotyping
Michael T Grabowski wrote on February 27, 2020 - 4:45pm Permalink
Bought a new highlander in 2009 . 216000 miles replace rear.brakes at 98000 front brakes at 188000. Replaced the auxiliary oil cooling hoses this year. New battery 2 years ago. That's is it.