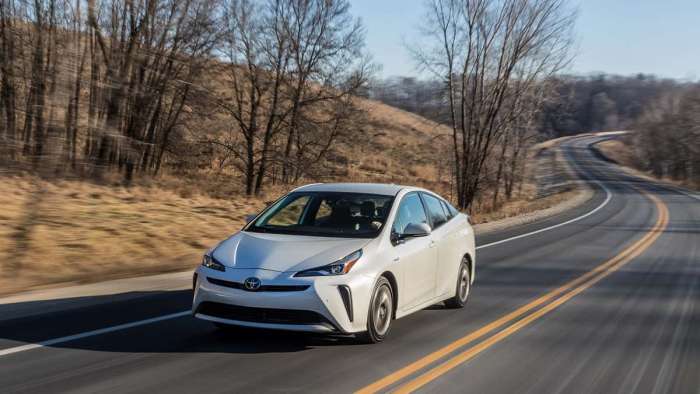 The Toyota Prius is a 20-year top seller in the green car segment. Could its success be as simple as good business practice?
Advertisement

Despite having legions of EVangelists penning spiteful stories about the Prius almost on a daily basis, the Toyota Prius remains the top-selling affordable green car in America. With a sales rate of over 5,000 units per month this year, and with monthly sales that have been well above 20,000 units in past years, the Prius has long been, and remains, the default green vehicle in America for under $30K. Why has it been so successful, and how has it remained a top-seller in light of the advent of the battery-electric vehicle? Good business practices could be the reason.

Toyota Advertises The Prius
Ask many EV advocates why their favorite model isn't selling as strongly as they'd like (or selling period) and many will tell you "Because the darn manufacturer doesn't advertise it!" This is a common theme on many models' fan sites. Toyota does advertise the Prius and always has. Every marketing major knows there are "4 Ps to marketing" Product, Price, Place, & Promotion.

Promotion is not a problem for the Prius. Toyota has bought Superbowl advertisements for Prius. Now into its second decade of sales, Toyota just rolled out a mass-media campaign supporting the Prius and highlighting its new all-wheel-drive system. The new Prius campaign is called, "It's Unbelievable." It is comprised of multiple 30-second TV adverts and Toyota is purchasing spots on major networks. It will also be run on radio and via social media of course.

Prius Top Safety Scores
The Prius is a commuter and family car intended for daily use. Every car in this segment needs to have top safety scores and the Prius has for generations. The 2019 Prius is a Top Safety Pick and scores a Good-Plus in IIHS child seat LATCH evaluations. Small details like that matter to family shoppers.

The Prius Exceeds MPG Expectations
Ask a Prius owner what their mileage is and they are likely to talk for half an hour. The primary mission of the Prius is to reduce petroleum consumption and no vehicle has been topping the list for fuel economy longer. However, doing what is promised isn't really how products become legends. The Prius beats its EPA-estimates on a daily basis. It did so around town in testing this summer in our fleet, and our resident racer Patrick Rall (who drives a Hellcat as his daily) beat the EPA Highway estimates with a Prius full of people and beer on the way to a concert a few years ago. The Prius is an icon because its owners know that it doesn't meet their expectations, it exceeds them. 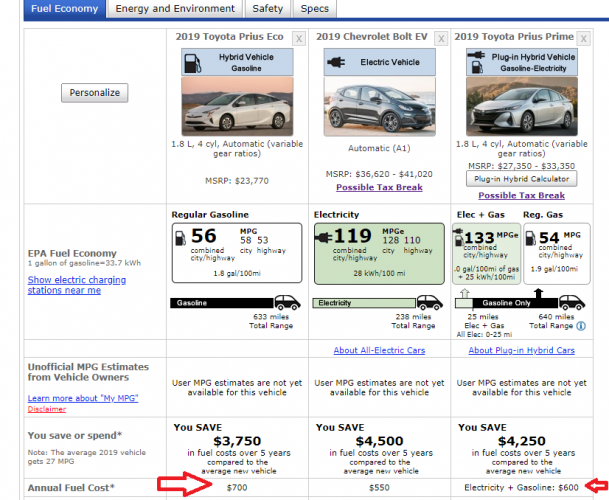 The Prius Has a Cost-Per Mile For Energy That Rivals EVs
EV advocates often promote the purchase cost of their vehicle with the note, "After fuel savings." That is flat-out fraud in our opinion, but at a minimum it is insincere. The gasoline-only Prius hybrid has an annual fuel cost very similar to battery-electric vehicles' electricity costs. The plug-in Prius Prime PHEV has fuel costs almost identical to EV's energy costs. Toyota's cost of ownership focus is well known to smart green vehicle shoppers.

The Prius Has Low Maintenence & Repair Costs
Every Prius has two years of included maintenance. Couple that with an engine design that has no power steering fluid to change and no timing belt needing service and the Prius' cost for maintenance and repairs is as low as any green vehicle it competes with. If you are going to stay a top-seller for two decades, it helps if the vehicle has a low cost of ownership. 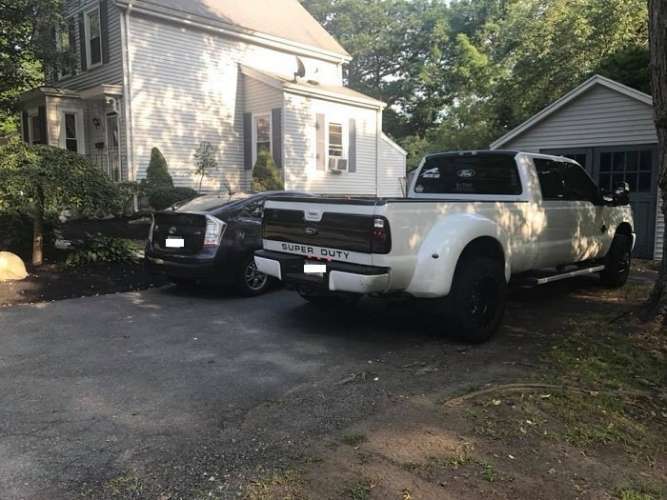 The Prius Is Fun To Drive
It's a shame, but tired (often uninformed) automotive writers often refer to the Prius as "boring" or "slow." The fact is, the Prius is a fun around-town car and very comfortable on the highway. It is a commuter/family car, and in that context, it's a fun-to-drive factor is in line with most buyers' expectations. The Prius has a 0-60 MPH time nearly identical to popular small crossovers and some midsized trucks. More evidence that the Prius is a decent driver is the fact that many Prius owners also own some pretty quick vehicles including BMW M Series cars, classic muscle cars, and other quick rides. 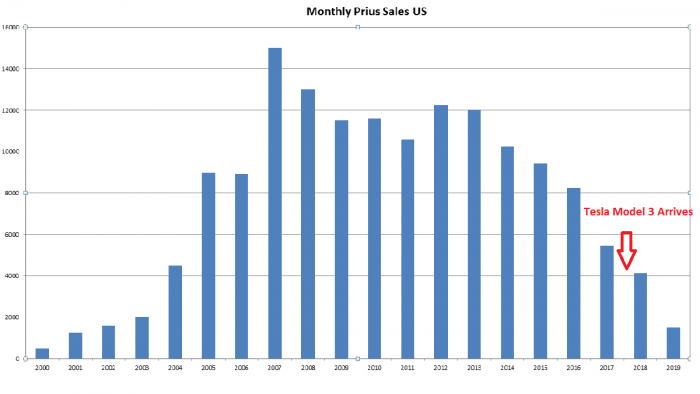 The Prius has certainly slowed its sales since its heyday, but that is also true of most other affordable green vehicles. What has kept it alive while cars like the Chevy Volt are killed off is a solid business plan.

See you in my next story where I am discussing Toyota Prius pros and cons vs Toyota Camry.

Karkus wrote on September 4, 2019 - 11:32am Permalink
Yep.....super low cost of ownership. Just sold our 2004 and did the math. 210,000 miles at 25 cents a mile (yep, that even includes things like dent repairs, etc). Most cars are 50-75 cents a mile. My wife said there was no way we'd get another Prius to replace it. After many test drives, my wife eventually drove a Prius Prime and she was sold. In Colorado, you get a total of 9500 in tax breaks, so you can pick up a mid level Prime for 20k. Electric range and MPG both exceed the EPA numbers. EVangelists can talk all they want about complexity, but Prius is one of the most reliable / low cost cars out there. And in EV mode (80% of our miles so far), it's actually FUN to drive ! Sure, Prius sales have gone down, mainly because there is so much more choice out there now (and that's great).... but really, if you want a reliable, low cost vehicle, it's still the way to go.
John Goreham wrote on September 4, 2019 - 12:17pm Permalink
Great input Krakus. Nobody on the BEV-Only team wants to admit what PHEV owners already know - PHEVs enable more all-EV miles in real-world operation, not less. As you point out, the true cost of a new Prius Prime in EV-target states is crazy-low.
Anonymous wrote on September 4, 2019 - 1:23pm Permalink
Happy Prius 08 and PIP 17 owner--amazing beautiful piece of engineering and a joy to drive. Commentary: So much misinformation from paid writers and machine generated (future sentiment shaping) pieces.
Dan wrote on September 5, 2019 - 8:08am Permalink
I’m in the middle of a 20,000 km tour across Canada and back.... 2014 Prius is the best touring Machine I have owned. Next year it will be going to the Yukon...maybe not the Dempster though.
Dan wrote on September 4, 2019 - 1:40pm Permalink
When asked how do I like my 2010 Prius, I say I will never buy another kind of car. This is my second. It costs me 16 cents a mile to drive. I buy them at around 100k miles, used. Almost soothing to drive, economical and deceptively roomy. My favorite thing about them is not only do the drive trains last. The dumb stuff lasts as well. Windows don't leak. Buttons remain and remain functional. With out a doubt, the ugliest car ever produced. And the best at checking all the boxes.
Emile Evans wrote on September 4, 2019 - 5:27pm Permalink
We have a n 11 year old Prius 100,000 miles and still on the original spark plugs it came out of the factory with! The Prius nickel metal hydride battery will last more than 15 years, far longer than any lithium battery
warren trout wrote on September 4, 2019 - 5:31pm Permalink
It exceeds EPA estimates because the kind of people who drive it, drive responsibly. Not stomping on the gas and brakes.
Paul S Ries wrote on September 5, 2019 - 1:47am Permalink
There's truth in this, and the interesting thing is I was the other kind of driver before I bought my first Prius (am on my second, now). It is a behavior modification vehicle!
Bruce Moore wrote on September 4, 2019 - 8:01pm Permalink
I own and continue to drive a 2005 Toyota Prius. It's been an amazingly reliable automobile! I've only really done basic maintenance with synthetic oil changes! I now have 169,000 miles driven. No mechanical issues either. I changed the front brake pads and rotors at around 110,000 miles. It drives well and holds it's own on interstates too! It would be nice perhaps to have a little more ground clearance. I still average 45-50 mpg. It's just a well made, and its initial roll-out was state of the art technology! It's sort of a shame it's being bypassed for small SUV's.
Paul Ries wrote on September 5, 2019 - 1:45am Permalink
I bought a plug in Prius (2017 model) and it gives the best of both worlds! EV driving for 28 miles (less on the freeway) which covers most of my trips, but no "range anxiety" or need to keep a "backup" IC for long trips. I am sad I didn't wait for the 4wd version as I do own a "backup" for my winter driving up in the mountains.
John Goreham wrote on September 5, 2019 - 10:01am Permalink
May we ask what your other vehicle is? One misconception the media perpetuates is that Prius drivers are only driving Prius cars. We like to point out that many have trucks, motorcycles, SUVs and sports cars as well.
David Plantenga wrote on September 6, 2019 - 3:35am Permalink
Short and Sweet ... Bought my first Prius. 2018 model 3 20,000 miles averaging 68.8 mph And it is fast and fun ... Now wondering why everyone doesn't drive a Prius
Jeff Cohen wrote on September 7, 2019 - 7:39pm Permalink
On our 3rd Prius: 2003, 2005 and 2017 Prime. Great cars. Charge at night, for free, drive mostly on ions. Still have the ‘03. Waiting for Jay Leno to buy it. Sure he will. Can’t say enough good about them.
Linda hardwick wrote on August 15, 2020 - 1:24pm Permalink
Toyotas reputation for making long lasting quality vehicles is becoming just a myth. When I purchased a 2012 Prius v, I was very pleased to become a Toyota owner. At just 94,000 miles I discovered my Prius had a cracked engine head and my now $10,000 car was going to cost me $6,000 to replace the engine. In the recent past Toyota had issued several recall notices on the 2012 Prius v engines due to an overheating problem. Toyota knew they had a problem and hid it. I am now in the process of searching for a new vehicle and clearly it will not be a Toyota as the quality is not something Toyota cares about. Toyota Corp has lost its focus of producing quality vehicles and customer service

Tesla-Funded Research Reveals One of The Biggest Mysteries of EV Battery
Tesla Tesla Buyer Nets a Whopping $12,000 Discount After Asking for Reduction
END_OF_DOCUMENT_TOKEN_TO_BE_REPLACED