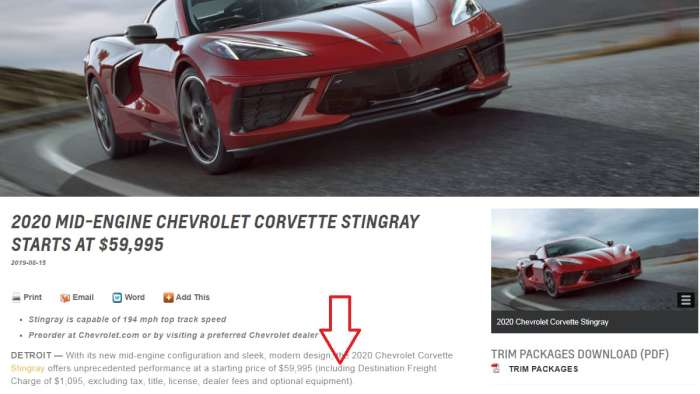 Manufacturers have been fudging the truth about automotive pricing for decades. Chevrolet's most recent Corvette pricing announcement resets the expectation for factual pricing.
Advertisement

In its latest press release for the 2020 Corvette, Chevrolet lists its base trim as "$59,995." Fans and interested shoppers would do well to ask "What's the REAL price?" As it turns out, THAT is the real price. Any fan of Tesla vehicles who has tried to buy a car from Tesla recently may be shocked to find out that no advanced math is required to figure out how much the Corvette costs.

Over the past decades, most automobile manufacturers serving the U.S. market have looked for ways to fudge the prices they offer the American buyer. Certain things are mandated by laws. For example, you will see stock numbers on a paper advertisement showing a dealer's price for a vehicle. That was intended to end bait and switch. It didn't end the practice. Even die-hard advocates for Tesla have recently accused that automaker of "Bait and Switch" sales tactics. However, the laws had good intentions.

One exception to true manufacturer pricing is the destination and delivery charge. Automakers don't have to charge anything to deliver your vehicle to the location at which you pick it up. However, in an effort to artificially lower the prices they show in advertisements, automakers and their legal advocates carved out an exception for this mandatory fee. Generally, it is not included in the price that you, the consumer, see in big bold letters. Instead, hidden down in the fine print is the whopping, four-figure fee you need to add to the car's price in order to find your starting point for negotiations. Sadly, many in the automotive press play along. I try very hard not to.

In today's press release from Chevrolet, the new Corvette's pricing INCLUDES the destination freight charge fee everywhere the price is mentioned. We have broken an unwritten rule by showing the actual press release header in our image above. We have done so to compliment Chevrolet. Note the arrow we have added showing the note that destination fee is included in the pricing. This is a refreshing change we hope all automakers will move to adopt.

Tesla has gone farther than any other automaker to obscure its actual pricing. When promoting its Model 3 premium/performance sedan, the company promised it would "start at $35,000." It never did. It started at launch much higher in price. Tesla got a lot of heat for this, and later did build a small quantity of Model 3 cars in one color, with no options with an MSRP of $35,000, but that did not include the mandatory $1,200 delivery fee. Tesla has made it very very difficult for buyers to get this unicorn. We tried. In person. At the Tesla Dedham store in late March. Tesla's employees told us they had never seen such a trim, and that they could not give us any indication of the delivery date if we pre-ordered one that day. They did offer a discount on a much more expensive trim in stock. What would you call that?

This type of promise of a low price, but leaving buyers to find that only higher-priced vehicles are actually available has a name and Tesla-advocacy publication Elektrek used in its story titled, "Tesla’s autopilot bait-and-switch does a disservice to early buyers who took them at their word."

There are other price tactics that are making it hard for buyers to determine the actual cost they will pay a manufacturer. Tesla is again a great example. It includes "gas savings" in its pricing and also "incentives." However, the gas savings do not apply to other electric or hybrid electric vehicles. The incentives refer to a tax deduction that not all buyers will receive. To see these imigainary deductions, one has to click the fine print to open the box shown above.

Was the GM pricing here intended to move the industry back toward a more meaningful, truthful price methodology, or was it happenstance that the pricing levels worked out favorably with the delivery fee included? Only time will tell.

DeanMcManis wrote on August 15, 2019 - 3:29pm Permalink
Both you and I agree that Tesla has been sneaky listing their vehicle price including the potential savings button, but they have changed their ordering web page so that up top it now has a slider to choose between the Purchase Price and Including Potential Savings Price. They should have the web page always default to the Purchase Price, and then I would not complain about it in the future. I am happy that Chevy is offering the new Corvette with a price starting at under $60K, even if it's Five dollars under, and includes no options or fees at that price. For me, my dream version will be a convertible model, hopefully coming later next year, and the optioned price looks around $80K+ with all of the options that I want included. Which is a relative bargain for what you get, but a long ways from $60K. And actually, The Corvette website doesn't yet have a live 2020 Corvette building app, with totaled prices available yet.
John Goreham wrote on August 15, 2019 - 4:43pm Permalink
If the actual Corvette price is different after the configurator is live, that will be a fantastic story to write! Thanks for pointing out that slider. I never noticed it before. I see now that the slider always defaults back to the included incentives when I revisit. Most interesting of all is that white is now the only standard color. In my zip, black is now $750.
Bob wrote on August 16, 2019 - 10:50pm Permalink
The $35k standard range Model 3 is actually much better than it was originally promised. 1. Originally they said it will be $35k plus inflation. I don't think we got zero inflation in 4 years. 2. Originally they said the $35k Model 3 will have 200 mile range. Now it's 220 mile (actual battery capacity good for 240 miles). 3. Glass roof is not supposed to be included in the base model, but it's offered for free. 4. 12-way power seats with driver/passenger profile are included for free. 5. Keyless entry is included for free. 6. Premium audio system 8. Navigation software included for free. 9. Games, dog mode etc. all included for free. 10. Active safety features are included for free. 11. Pearl While Multi-Coat is free 12. Premium seat material and trim This car has tax incentives and also can save a lot on gasoline, nothing wrong to point it out. The destination fee is like the shipping cost when you buy something online, the cost is real, Tesla has to pay for the shipping and handling. My main point is Tesla is selling the $35k EV that's way better than originally promised. However, I think the $39k SR+, $38k LR AWD, and P3D are much better deals.