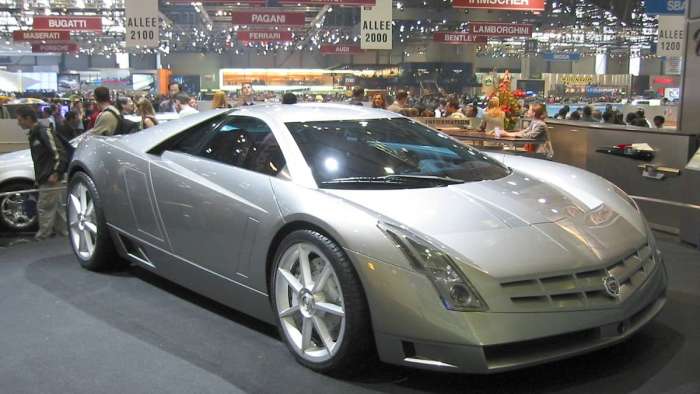 In 2002, Cadillac celebrated 100 years of building cars by building a special mid-engine, supercar concept car: the Cien. Now 17 years after the Cien concept's unveiling, Cadillac could actually realize the dream of the Cien concept using the mid-engine 2020 Corvette Stingray as it's core platform.
Advertisement

In introducing the Cien concept Cadillac said, “in keeping with the brand’s role as a technology flagship for General Motors, the V12-powered Cadillac Cien concept car is a befitting icon to usher in the brand’s 100th anniversary” Cien is Spanish for 100.

The Cien was an amazing concept car, with chiseled, sharp styling that would echo through Cadillac’s future cars for years to come. It’s Northstar 7.5L XV12 engine made a whopping 750HP/650TQ and propelled the car to 60 MPH in 3.5 seconds. 2002 was the same year that Ferrari released their iconic, mid-engine supercar, the $660,000 Ferrari Enzo whose 6.0L V12 engine made 650HP/485TQ and got to 60MPH in an amazing 3.1 sec. You can be sure that none of the Ferrari buyers cared that the new supercar managed 7MPG city/12MPG hwy, but efficiency does matter today.

Then we quickly fast forward to the newly revealed 2020 Corvette Stingray, which is rated at 495HP/470TQ, and which is supposed to be capable of 0-60 in under 3.0 secs.

Performance Cadillacs and the Corvette

Shortly after the Cien concept was revealed (in 2003) Cadillac came out with the new XLR, which was a V8 powered, 2 seat convertible designed to compete against the sporty and luxurious Mercedes SL. It shared the Corvette’s Y platform with RWD and a front engine V8 and rear transaxle. Later they sold the XLR-V, adding a supercharger to the Northstar V8 for 445HP.

Cadillac to be the EV leader for GM

At the 2018 Detroit auto show GM announced that they would be introducing 4 new EV models by 2020, and at the 2019 Detroit show GM more specifically said that Cadillac would be GM’s “Vanguard” brand for electric cars. They said that Cadillac would be able "to respond quickly to customer preferences with a relatively short design and development lead time" due to its flexibility and variability. They also said that by 2021 they would be able to reduce the cost of their automotive batteries down to 30% of the current cost of Bolt batteries.

Which brings us to Cadillac’s future plans. Rumors persist about the 2022 Corvette Zora being an AWD hybrid supercar, combining a TTV8 gas engine with two front hybrid motors in the new Corvette Stingray. So how much more work would it take to replace the Stingray nose and tail with unique Cadillac styling, add a more luxurious interior, ditch the gas engine and add a bigger battery plus another pair of electric motors to drive the rear wheels? With 4 electric motors working together combined with a powerful battery, it would be very easy for Cadillac to offer acceleration times even quicker than the Stingray. Plus the electric motors will offer the smooth, silent driving that a luxury performance car owner expects.

There is a chance that Cadillac might even have a few EV test mules driving around already in disguise, which everyone assumes are Corvettes.

Watch Top 10 Most Sold Electric Vehicles in USA During 1st Half of 2019 and Click to Subscribe to Torque News Youtube Channel for Daily Chevrolet and Automotive News Analysis.

See you in my next story where I am discussing how 2020 Corvette's lack of manual transmission is a generational and dealership issue.

Ari wrote on July 26, 2019 - 12:55pm Permalink
Considering the sales disaster that was the Cadillac XLR I doubt Cadillac will have I any interest in a Cadillac version of the Corvette for a very long time.
DeanMcManis wrote on July 27, 2019 - 9:04pm Permalink
The difference is that the XLR was built as a direct competitor to the established Mercedes SL and SL55. If Cadillac could build a mid-engined EV supercar (and price it under $100K) it would be very competitive. If they priced it under $75K there would be a waiting list of eager buyers.

LG's New EV Battery Plant Is a Welcome News for Tesla
Tesla Giga Berlin's New Hurdle: It's Not Only the Gov't, but Now Tesla Itself
END_OF_DOCUMENT_TOKEN_TO_BE_REPLACED