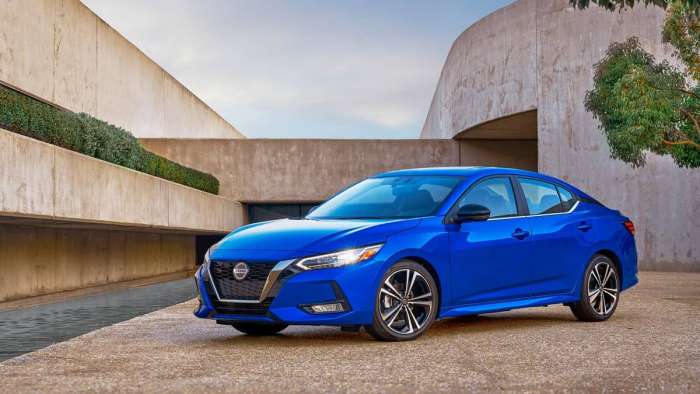 We have just tested the new 2020 Nissan Sentra and liked it more than some $60K sports sedans. Here's why.
Advertisement

Torque News has been fortunate to have tested six sports sedans, all from premium brands, over the past quarter. The prices ranged from just over $50K to just over $60K. Each had a lot to offer, but frankly, only the Genesis G70 AWD 3.3T Sport justified its $53,245 price tag. The rest were great in some ways, but all seemed to have a fatal flaw or two that would keep us from recommending them to friends and family. So they will go un-named. This is an opinion story about the 2020 Nissan Sentra SV, not a sports sedan comparison.

Fancy Transmissions and High-Power Engine Flaws
One flaw many of the sporty sedans had was a poor use of power and torque for everyday driving. Sure, if an enthusiast magazine hooks up a test rig and then floors them in perfect conditions and records the 0-60 MPH time the sports sedans all create an impressive specification. The problem is, in real life, nobody does this on the way to work. What do we do? We scoot from turn to turn. Stop sign to stop sign, and occasionally we will blast up an on-ramp at full tilt where it is safe to do so. The Nissan Sentra is as satisfying as most of the sports sedans at doing this. It is more satisfying than at least a couple of the pricey vehicles we tested.

CVT Tops The DSG
How could this possibly be in a vehicle with 147 hp? You're not going to like the answer. The answer is that Nissan's Sentra uses a modern-generation CVT transmission. It enables the Sentra to use its torque low in the rev band and to have zero lag time. You push on the throttle and you get instant movement. Satisfying movement. The dual-clutch auto transmission in our sports sedan test group was the exact opposite. Give it gas and - nothing. For a half-second. In many real-world situations, that half-second is all the time you have to accelerate. And you miss it.

The same is true when underway. You want a quick burst of speed and toe the throttle. In the Sentra, you get a quick burst of power and you are very satisfied with the feeling. In a few of the sports sedans, you get a transmission starting its shifts, then a turbo begins to spool, and then the stop sign is here. And you think, "Why does this $60K marvel have that lousy result?" It's because the transmission is built for that enthusiast magazine scenario. Not the real world. One of the pricey cars we tested literally clunked when it shifted down in normal driving. Clunk is not a $60K sound we appreciate. The CVT in the Sentra was always smooth. 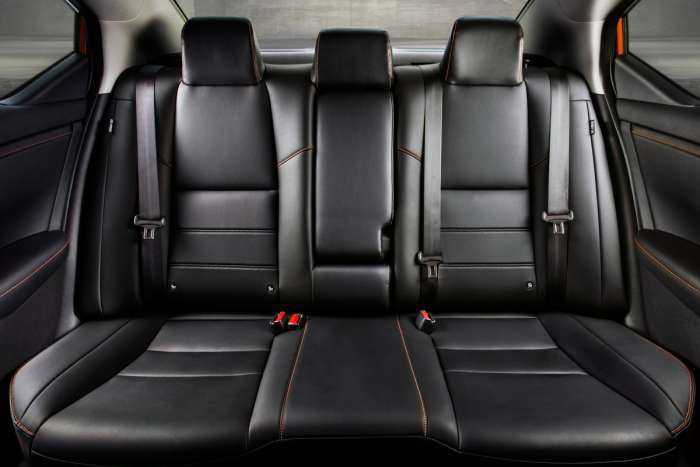 Roominess Matters
The new Sentra has 95.9 cubic feet of passenger volume. Compare that to a vehicle like the Genesis G70 which has 94 cubic feet and you may be left scratching your head. Isn't the Sentra a small car? No, it isn't really. And its front-wheel drive layout means the interior can be much larger than a rear-wheel drive vehicle's. The Sentra's back seat was roomier and more useful than any of the six sports sedans we tested. Its trunk was about the same with one important difference. The Sentra had a spare tire under the cargo floor. All but the G70 were missing that feature in the group we tested. Pay more and get less is the general theme with the pricey cars. That's how you know it's special.

Tires Matter
The Sentra also pleases in another important way. Comfort. The Sentra SV we tested had "normal profile" tires. Our Sentra SV tester had the standard 16-inch wheels and a meaty sidewall. That added great comfort over the broken up winter roads in our New England test area. In downtown Boston and in the suburbs the holes are everywhere and you cannot avoid them. The highways are actually more dangerous to your rims. They are 99% perfect and then you will find a foot-deep hole in your lane which you will not see at night. WHAM! And you just damaged a $400 tire on a sports sedan, and possibly the rim and wheel bearing. The Sentra just goes "bloop," and on you drive. Because the base tires make more sense in the real world. Most sports sedans are equipped with tires intended to give a certain result on an enthusiast magazine's skidpad and a slalom course. Neither of which is a good analogy to anything you will ever encounter in the real world. On the highway, the Sentra was just as satisfying to drive as every sports sedan we tested. It was smoother than most, and it tracked straight ahead. Those super-low profile tires tend to follow road imperfections a lot. It gets old. 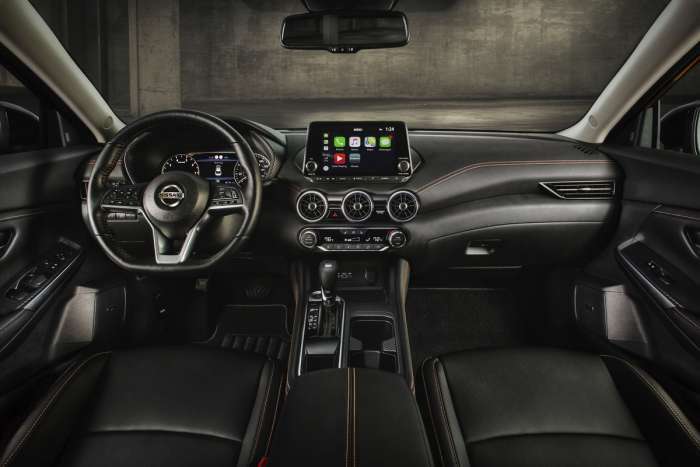 Infotainment Is Now Democratized
Our $21,400 Sentra SV tester also had excellent infotainment. It had Android Auto and Apple CarPlay compatibility so we didn't need a Sat Rad subscription nor did we need built-in navigation. This keeps costs down. Our SV also avoided the $2,100 heated seat charge. We'd gladly pay $200 for heated seats, but paying ten times that to get a package with a moonroof and few other amenities is a dealbreaker for many shopping for an entry-level car.

We could not be happier that Nissan opted to send us an affordable, real-world car that we could evaluate. We won't embarrass the other five brands we tested. We understand that some buyers want a vehicle that is great on a spec sheet. We get that built-in nav is worth $1000 to someone. That little analog clock all the premium brands have is worth another $20K for certain as well.

This opinion story is written by a writer who has owned a Supra, Integra, Miata, and also a $50K car just like the ones he is bashing above. He understands real-world driving pleasure. If you have not driven a new Sentra, you really should. If you own an expensive sports sedan we'd advise against driving a Sentra. You will not love your pricey car as much after doing so.

Image Notes: Some images above from Nissan show the SR trim.

Digitaldoc wrote on February 14, 2020 - 11:29am Permalink
The new Sentra is certainly an improvement from the previous, but I would not give it so much credit. With Car and driver testing the Sentra, their opinion is "The good times end when you floor the throttle. Working the engine harder reveals that it's weak and noisy." Yes, the car is more driveable, but with the torque peak up at 4400 rpm's, even with a great tranny, this engine is hardly going to be a pleasure to drive.
John Goreham wrote on February 14, 2020 - 12:45pm Permalink
Exactly. Car and Driver. I read every car mag every month for 35 years. Back when I used to read CD (which was my favorite), I liked one of the regular monthly column writers. He loved cars with high performance and had nothing good to say about such "boring" cars as the Sentra. He could spew polysyllabic prose on the finer points of lift-throttle oversteer as if it was something any normal human would ever actually feel. Then one day he revealed that the car he and his wife owned was a used CR-V. Because in the real world it is rare to actually "Floor the throttle." And drivability is what most folks really want. Like the story says, the enthusiast magazines sell a fantasy world. No shame in buying into the fantasy. I did for a long time. Then I actually started testing the cars myself and realized what was going on. Thx for posting this.
Digitaldoc wrote on February 14, 2020 - 10:07pm Permalink
I've read the car magazines as well, and for the last 40 years. I've driven two Sentras in the past, and both were seriously underpowered, with lots of noise and little action when given the gas. I have no doubt the latest is better, but still it should get an optional engine for those that want some more power (even the new Corolla, Mazda 3 and Civic offer more). I drive in NY, and we are known for our aggressive drivers, and I can vouch that getting on the LIE in the morning rush hour is not for the faint of heart, or an anemic engine. I like your story about the guy who drives a used CR-V!
Jane G wrote on February 14, 2020 - 3:57pm Permalink
I will definitely test drive this car when we shop for a new car.

Tesla Contemplates A New Strategy for China Retail even As Sales Boom
Jay Leno on Elon Musk & EVs: “I Think He Should Get ... Credit"
END_OF_DOCUMENT_TOKEN_TO_BE_REPLACED