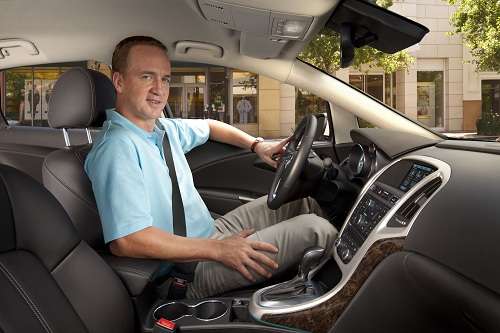 One More reason Tom Brady is cooler than Peyton Manning

Why does the fotball champion for Indianapolis, and now hero in Denver drive a Buick Verano? Is he not aware of the Cadillac CTS-V?
Advertisement

Here at Torque News we do not judge people by the cars they drive. Simply put, most folks would prefer to have a full stable of cars, each suited to the particular mood and needs of the day. The fact remains that budgets, families, and taste dictate what we drive pretty much in that order. However, there are those who walk among us that have more money than they will ever spend, or that their heirs can spend in a few generations. It seems fair to pick on those folks a bit when they opt for a ride that seems, shall we say, ill-suited to their station in life.
We all remember Tiger Woods’ family implosion that resulted in a golf club coming through his rear window. Who could blame the big-guy if he from then on bought extended bed pick-ups with a contractors wire mesh over the rear glass? Once burned, twice shy. However, it seems he is a Buick man now and he has just been joined by Peyton Manning.

For those who are not paying attention Peyton is the guy who a few years back was the favorite son at Thanksgiving at his house, Super Bowl winner, and arguably the best QB in the NFL. Then his little brother had the audacity to win two rings and upset the apple cart. Who’s sitting at the kids table this year? That sibling rivalry is minor compared to Peyton’s real rivalry though. The guy Peyton wakes up in sweats cursing is named Tom Brady and Peyton has just handed us one more reason to think Tom Terrific is the big man on campus.

There is no doubt that Buick is a world class luxury car. GM is laughing all the way to the bank and the word for luxury car in China is pronounced Byoo-wik. However, here in the US cool is not pronounced Verano. On the contrary, it is much more subtle. One car that is cool is the Audi A8, especially a black one. Maybe one with a bit of something special under the hood, some tinted glass and a whiff of supermodel mingling with the leather scent. That’s Tom Brady’s ride and that is why he is the man. Peyton’s Verano looks a little common next to Tom’s ride at the stop light. Dockers compared to Armani. A press release today shows Peyton in a new commercial saying “After I call audibles in the Verano, I don’t get hit in the back.” That is a good way to look at it. After all, Tom Brady was hit pretty hard from the side while driving in his A8 to a game once.

Setting aside the humor for a moment, will someone please tell Peyton that his head rest is way too low (See photo). That neck is worth about $10 million more dollars if it can turn left while throwing right. Help the headrest help you Peyton.