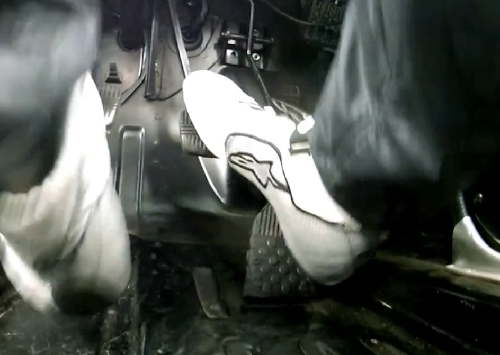 One of driving's most difficult maneuvers, heel-toe shifting explained

The need for heel-toe shifting is going away as the world turns to new automated transmissions. We turned to a pro to give us some insight on what may become a lost art.
Advertisement

Driving a stick shift manual transmission can be learned by most with help from a friend and some practice. Enthusiasts like to take that to a higher level and use the stick shift in a way that goes beyond just spirited driving. The method is called Heel-toe shifting. Heel-toe shifting can be learned on a race car with an instructor, or it can be learned on a street car with help from a person who can do it. In order to get a full understanding of the topic, Torque News turned to a pro Gary Sheehan, professional driver and engineer.

Sheehan studied electrical Engineering and has had a career in the automotive industry specializing in electronics used in the tuning industry. In parallel to his career as an engineer, Sheehan has also been a race driver, test driver, and driving coach. He taught himself heel-toe shifting and honed his skills on, of all things, his Hyundai Excel street car in the 1980s.

When a driver drives a stick shift the clutch is key. It must be depressed to move the car form one gear to another. Moving slowly through the gears is something any driver can learn with some coaching and practice. However, when the driver wants to slow the car suddenly, down-shift, and turn at the same time things can get tricky. If the driver wants to exit the corner in a lower gear so that he can accelerate from it, the shift down needs to be done while the car is pitched forward under braking, and also pitched to one side.

This unloads the inside rear wheel. If the driver downshifts quickly and lifts off the clutch the car can spin because the torque is reduced then suddenly re-applied as the engine’s speed changes from low to suddenly high when the clutch comes up. In racing this is unacceptable obviously and there is a trick to counter it.

The trick is to match the engine’s revs to the lower gear by “blipping the throttle.” Here is how it works; The driver brakes with the right foot and keeps his foot there. He uses his left to actuate the clutch and also uses the right foot apply a stab of the gas pedal. Did you notice that is two uses of the right foot? In order to both brake and also apply gas, the driver uses the right foot to do both at the same time. See the photo. When done properly the blip brings the engine’s revs to the same speed as the transmission and the rear wheels do not have an upset due to added torque while turning. The driver can then accelerate out of the turn. This technique is called heel-toe shifting.

The video below of Sheehan driving a Subaru STI on track shows how it is done right. In fact, the video shows an extra step Sheehan and some others employ to provide the car with the most balanced shift possible.

Sheehan understands cars at a fundamental level, has trained himself to do this and he has been paid to instruct others. For most drivers this is not really practical. They just want to shift smoothly and have some fun. For those drivers the Chevrolet Corvette, Porsche 911, and Nissan 370Z all come with a new style of stick shift that matches the revs for the driver. Best of all it is can be shut off in case the driver happens to be a pro and wants to do things for himself. (see accompanying article by clicking here)

Heel-toe shifting may become a lost art. However, the stick shift may carry on due in part to this new technology.

Video Courtesy of Gary Sheehan and Youtube.com
Photo is a 200 Skyline GT-R replica driven by a Nissan test driver. Photo courtesy of Nissan.