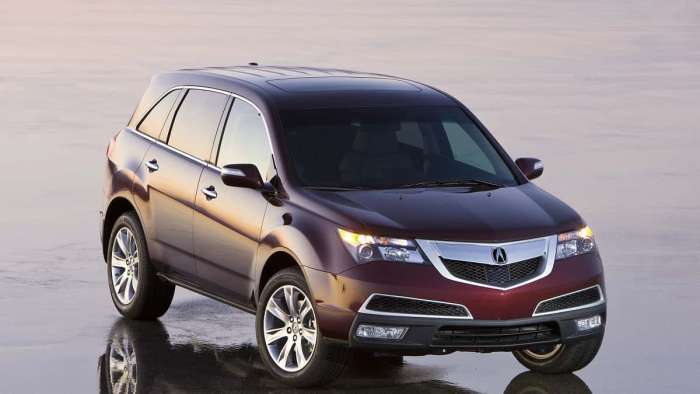 The 2013 Acura MDX crossover/SUV has been named the best affordable used vehicle under $20K. Here's why.
Advertisement

The 2013 Acura MDX has just been named the best affordable used vehicle under $20K by iSeeCarscom. Researchers at iSeeCars.com analyzed over six million vehicles from model years 2011 and newer to determine the used vehicles that demonstrated the very best long-term reliability. In addition, the vehicles considered must also and have earned an average safety rating of at least 4 stars out of 5 in safety testing conducted by the National Highway Traffic Safety Administration (NHTSA). Not all buyers have the same budgets. For that reason, iSeeCars further examined which used vehicles are the smartest buys across multiple price points. In the under $20K category, the 2013 Acura MDX crossover rose to the top. “These vehicles are proven to last beyond 200,000 miles, which means they can last at least 15 years if they are driven at the average annual mileage,” said Phong Ly, CEO of iSeeCars.com. “So even a nine-year-old vehicle, if well-maintained, can still have many more years on the road.” 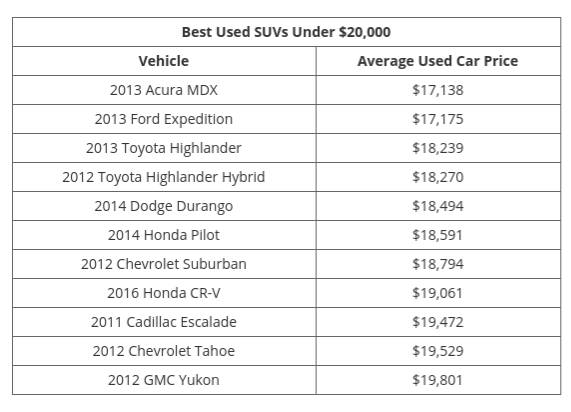 The 2013 Acura MDX is a mid-sized, three-row crossover with seating for seven passengers. With 300 hp, this premium crossover is a popular choice for those who want many amenities and superior performance without paying more for a German-badged crossover. The MDX was rated 8.5/0 by U.S. News and World Report, and earns a 4.6/5 score from Kelly Blue Book. Check out Torque News' full review of the 2013 Acura MDX right here.

2013 Acura MDX Reliability
The 2013 Acura MDX earns a very respectable 4/5 stars from Consumer Reports. This score is not based on the opinions of editors at the publication, but rather owners. We also looked at CarComplaints.com to see if the 2013 Acura MDX had any owner-reported recurring problems. There were none to be found.

2013 Acura MDX Safety
Rather than NHTSA safety data, we looked at the Insurance Institute For Highway Safety's (IIHS) test reports for the 2013 Acura MDX and found it earned the Top Safety Pick award. The MDX scored Good on every crash test conducted. Blind Spot Detection was optional on the '13 MDX, something many shoppers enjoy using.

The MDX is a proven reliable and safe crossover that a shopper with a budget of $20K should seriously consider. Those with a slightly lower budget may be interested to know that the 2013 Honda CR-V was iSeeCars.com's pick for the best vehicle under $15K.

Do you own a used Acura MDX? Tell us in the comments below how your experience has been. Your report may help a used car shopper make a more informed decision. Click here for the full report from iSeeCars.com.

Dan wrote on July 3, 2020 - 3:12am Permalink
I bought my 2013 Acura used in 2016. I’ve had it 4 years and it now has 104k on it. Other than regular maintenance, I’ve never had to do anything else. This SUV is amazing. I love my Acura MDX. It is surely the best vehicle I have ever owned. I plan to keep it for many more years.
Rawle wrote on September 12, 2020 - 9:26am Permalink
I own a 2012 mdx for the last year and it been an absolute dream. No issues with a smooth ride. Just oil changes. Am expecting to keep it as long as it make sense to do so.
Mark Livengood wrote on September 19, 2020 - 2:10pm Permalink
Owned my 2013 for six years. Love it! Tranny reprogrammed under warranty and front door speakers replaced for better sound. Plan to keep for many years. No problem with excess oil consumption. Wish front seats were more conforming like Recaro’s. Center armrest not comfortable. Turns a lot of heads.
Joni Boulware wrote on January 13, 2021 - 7:59pm Permalink
One owner of 2007. Just hit 100,000 miles. I won't give it up until 2022 Hybrid MDX is available. Since that is not announced yet, I could be waiting awhile. Such a reliable vehicle.
Shawn Berto wrote on January 27, 2021 - 12:51pm Permalink
Love our 2012 tech. 105k miles runs like a dream
Myla wrote on March 27, 2021 - 2:06pm Permalink
I bought my 2008 MDX in 2012 and it has been the best vehicle I have every owned. I’m coming close to 200,000 miles and aside from the regular recommended maintenance, no problems and has never left me stranded. I will keep this vehicle until maybe the transmission goes out or the maintenance needed far exceeds the value of the car. Otherwise this is a keeper.
Q wrote on April 2, 2021 - 7:02am Permalink
I bought a used 2013 Acura MDX five years ago. I can honestly say this is the best car or SUV I have ever owned. It’s maintained per manufacture’s recommendations and I have never had any issues with mine. I have not had any oil consumption issues. It has been a perfect SUV. I currently have 110k on mine and expect to keep this vehicle for many more years. It’s still in great condition; no rust, no dents, no scratches. It still looks relatively new. Acura MDX’s are a great value, especially a used one.
GraceNora wrote on April 26, 2021 - 3:52am Permalink
This is a Nice Blog, Thanks For sharing your knowledge!! I replaced my worn out car engine with a Used Acura Engine. Now my cars performance is very smooth. I bought this engine from Autoparts-miles.com one of the best site to buy Used car Engines online.
sutton brady wrote on April 29, 2021 - 2:12am Permalink
Thanks for providing usefull information through this article