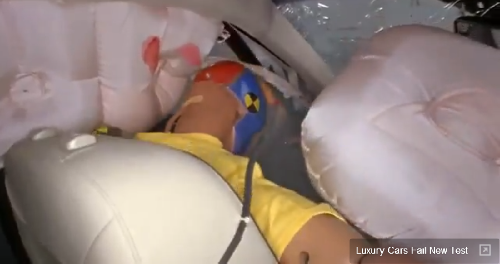 The IIHS had found in recent years that most new cars were getting excellent marks on all the tests it performed. How can the IIHS stay relevant if all the cars do well? Change the tests of course.
Advertisement

The Insurance Institute For Highway Safety has done more to improve the safety of modern vehicles than almost any other agency. Early on the IIHS instituted a frontal offset crash. The IIHS knew that most front end collisions were not two cars meeting exactly head on. That type of crash is bad, but at least the full front of the cars can absorb the impact energy. A frontal offset crash is worse because the car only has half the front end to absorb the same energy. Over time all of the automakers redesigned their cars to be safer, but also to specifically pass the tests they knew the IIHS would throw at them. All the automakers proudly trumpet the results of these tests when they pass.

All Cars Were Doing Well On All Tests
Recently the IIHS announced that almost all new cars were now doing extremely well on all the various tests it performed. At that instant automotive enthusiasts and others wondered “Then why do we need the IIHS?” To stay relevant, or to continue to improve automotive safety, or maybe both, the IIHS has now changed the frontal offset test to make it much harder to do well. Many very expensive automobiles have done quite badly on the test in this first round. The truth is, the cost of a modern car has almost nothing to do with its safety and its ability to do well on crash tests. Mainstream cars like Hondas, Toyotas and VWs do just as well as the very expensive models of the same size from those same brands. All the cars now have airbags everywhere, exotic braking systems, and stability control and tire pressure monitoring is mandated by law in all vehicles. The failure by some of the most expensive compact and mid-size cars on the planet raises serious questions. Are these cars not safe? Why did they do poorly after having aced prior tests?

The New Test
The frontal offset test allows a car’s full front quarter to be involved in the energy dissipation. Also, by tying the engine to both sides, the engine actually pulls on the opposite side of the car imparting energy on the non-impact side. Automakers also changed the design of the A pillar. That is the bar that goes up from the corner of the hood to the front corner of the roof. That member is now arched and secured differently to the body. That arch allows energy to travel back to the roof more effectively. Almost every car maker uses the same basic design and it works very well. As reported by TN’s Aaron Turpen, the new test negates some of these improvements. By moving the barrier much closer to the side of the car, only an eighth or so of the car can now be involved. By cutting to the side of the engine mounts the opposing side is less involved. By hitting the A pillar almost straight on its robust design will be challenged. The vehicle also is spun by the new test meaning that the driver hits the top and sides of the interior more. Reports of the results also show that some of the airbags are too slow to deploy in this test and that drivers heads missed the airbags and went into the corner of the dash (see picture).

Why Did IIHS Claim It Needed A New Test?
IIHS claimed to CNN Money that a quarter of serious and fatal injuries are caused by this type of impact. Let’s step back from that statement. So a quarter of all the bad things that happen are from crashes of this type. Yet, this test is only now becoming part of the many types of tests done? Also, remember, a huge percentage of all “traffic” deaths are pedestrians being hit by a moving vehicle. Bus, train, truck, delivery van, cement truck, and sometimes car. More than half of those deaths involve a drunk pedestrian. Also, haven’t we been hearing that texting is the real cause of all bad things? What about drunk drivers, are they not the problem anymore? Mercedes was quoted by CNN Money as saying “As a leader in automotive safety, we have full confidence in the protection that the C-Class affords its occupants -- and less confidence in any test that doesn't reflect that.” At first this sounds arrogant, but is it?

Picture and video courtesy of Youtube.com and edrichome