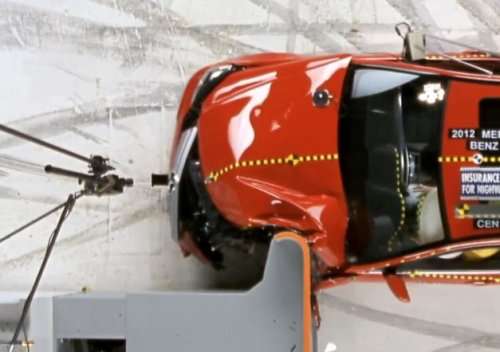 The IIHS has added a new frontal crash test in light of new accident data showing that about 25% of fatal and serious-injury crashes are involved in small-overlap impacts. Many new luxury cars are failing this test.
Advertisement

New data from the Insurance Institute for Highway Safety (IIHS) shows that nearly a quarter of the fatal and serious-injury crashes that happen in vehicles which have received a "Good" rating in their current offset test were involved in a small-overlap impact. Normally, the IIHS has tested vehicles with a half-overlap, meaning fifty percent of the driver's side of the car is hitting the barrier. The Institute has now added a test which puts only 25% of the front-left corner of the car into the impact, simulating these small-overlap tests.

Many cars which rate well (receiving the IIHS highest rating of "Good") in offset frontal impact tests are failing when the impact is reduced to 25% of the corner. This is because of the way airbags, vehicle framework, and physical forces affect the vehicle and its occupants. In a 50% frontal impact, the car does not spin very quickly, so the forces on the occupants are low, and more of the vehicle's frame is impacted, allowing a larger portion of its structure to absorb the force. Side curtain airbags don't always deploy on these impacts and are not expected to.

With the new test, however, those things change. As the video below shows, the car spins much faster and more severely and if curtain airbags do not deploy, that spinning force can mean the driver's head does not meet the steering wheel airbag at all, instead often whipping into the posts on the left side. Further, with much less of the vehicle's frame to absorb the impact energy, it often flows into other components, shoving steering wheels, dashboards, and more out of place and hitting or potentially pinning the driver.

In new tests of 11 new 2012 model year cars, the IIHS found that only the Acura TL and Volvo S60 received the highest rating of "Good" in this new test. The Infiniti G received an "Acceptable" rating.

While these preliminary tests won't affect the car's 2012 ratings, starting in 2013, this test will be a standard part of the IIHS rating program. A new "Top -tier" safety designation will be given to current Top Safety Pick vehicles which receive a "Good" on the new small-overlap impact test for 2013.