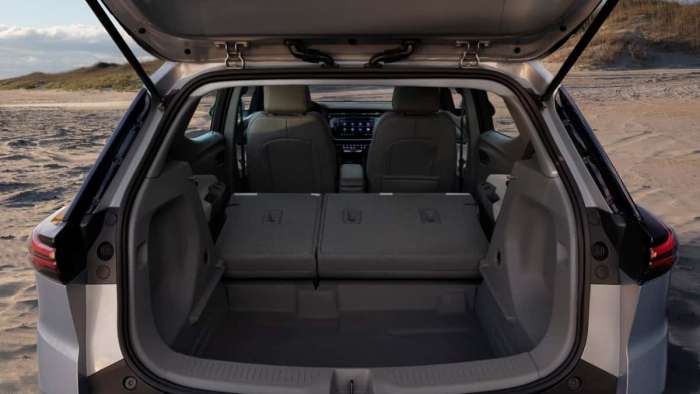 Shouldn't the larger "Utility" version of Chevy's new Bolt have more cargo space than the smaller hatchback version of the vehicle? According to GM's official specifications, the bigger utility Bolt has less cargo volume. And as far as we can tell, it does not have the ability to tow a trailer.
Advertisement

Those hoping that the new Chevy Bolt EUV will be an "Electric Utility Vehicle" may want to look closely at Chevy's fine print. We did, and we discovered that the new "larger" 2022 Chevy Bolt EUV has less cargo volume than the smaller Bolt hatchback, is only offered in two-wheel drive, and has no towing rating.

We have cut and pasted the cargo capacity data from the General Motors official specifications for the new battery-electric vehicles above. As it stands, the Bolt EUV has slightly less cargo volume than the new Bolt will. That lower utility volume is found both behind the rear seats and also when the rear seats are folded.

To give the Bolt EUV's cargo volume some perspective, we looked back to a prior green utility vehicle with front-wheel drive, the Prius V. The Prius V offered a total of 34.3 cu ft of volume with the rear seats up and 67.3 cu ft with them folded. That is significantly more than the new Bolt EUV will have. The Prius V had about 16% more cargo volume than the new Bolt EUV will have.

Related Story: 3 Reasons Toyota Should Bring Back The Prius V But In AWD-e

Some other battery electric vehicles now on sale with similar cargo volume include the Kia Niro EV with 18.5 cu ft and 53 cu ft and the Mustang Mach-E with 29.7 cu ft and 59.7 cu ft. Both of those values are with the rear seats up and then folded down.

Those looking for a true utility vehicle with a plug and all-wheel drive that is capable of towing up to 2,500 pounds should consider the Toyota RAV4 Prime PHEV. It offers a much larger cargo volume than the Bolt EUV of 33.4 cu ft and 63.2 cu ft. And Toyota managed to find space for a compact spare tire in every trim.

Chevrolet did not include a tow rating for the Bolt Electric Utility Vehicle, so we will assume it is not rated for such duty. The prior generation Bolt included the warning below in its owner's manual. 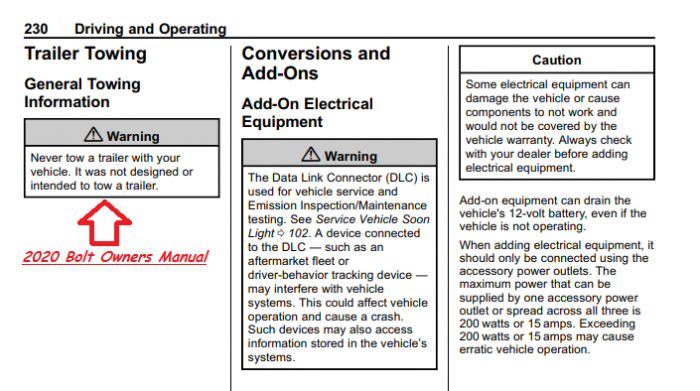 DeanMcManis wrote on February 17, 2021 - 2:37am Permalink
The interior storage capacity is effectively the same between the regular Bolt and EUV model, but that doesn't make sense. The EUV model is 8" longer, and there's 3" more rear seat legroom. So how can it not have more interior storage space? The RAV4 Prime has 6 more cubic ft. storage, and the Model Y has 11 more cu ft. storage. And even though the new Bolt now starts at $32K, and EUV $34K, their Launch Edition with SuperCruise costs the same $43K as the Tesla Model Y SR, and more than the RAV4 Prime at $38K (when the prices settle down). But we will have to see if Chevy dealers still will offer the kinds of special discounts for the Bolt and EUV model that they have in the past. And if the Federal energy bill passes, then Chevy could shave another $7K off the prices of both Bolt models. Which could again make them quite competitive.
John Goreham wrote on February 17, 2021 - 8:20am Permalink
I thought the specs were wrong, but I reached out to GM prior to publication and they said they are accurate as shown. They do say that the specs can be deceiving.
Timothy Parker wrote on February 17, 2021 - 11:59am Permalink
Yes, very odd that there is less cargo space, and the seats folded forward don't seem to give much usable space. I really like the flat floor with the seats folded in the Buick Encore. It looks like the standard Bolt does better than the EUV, though I wonder if the EUV has a false-floor option that would help. One aspect of the RAV4 that I found disappointing is that the seats didn't fold down far enough to make a level surface. I certainly think the EUV should be about more than just passenger legroom and SuperCruise.

Tsingshan's Threat to Tesla: EV Maker Is In Battery Crosshairs
Tesla-Funded Research Reveals One of The Biggest Mysteries of EV Battery
END_OF_DOCUMENT_TOKEN_TO_BE_REPLACED