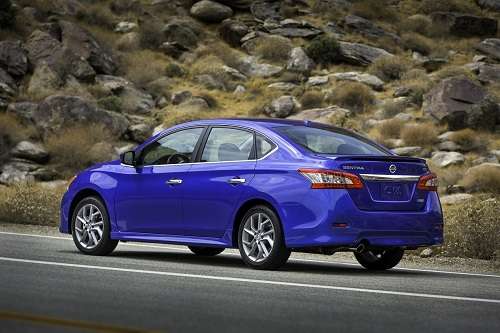 New 2013 Nissan Sentra steps up in terms of mileage, comfort, and looks

The all-new 2013 Nissan Sentra is no longer the baby in the family and it shows.
Advertisement

The new 2013 Nissan Sentra is no longer an entry level car. There was a time when the Nissan Sentra was the smallest vehicle for sale in the US by Nissan. With the two offerings called Versa and the Nissan Cube, the Sentra is now free to move a little up-market. Just as the Altima was for many years just a little short for the court, the Sentra is now out of its former category and knocking on the door to a bigger gymnasium ready to play ball with the bigger kids.

Sentra vs Altima
To keep this 2013 Nissan Sentra in perspective it is helpful to jump back in time. This car is just about the size of the second generation Altima and it has features and specifications beyond what that car offered. Consider fuel economy. According to the US department of energy the 2001 Altima had a fuel economy rating of 20 city and 28 highway, 23 mpg combined. This new Sentra is able to get 34 mpg combined. Yes that’s right about a 32% increase over 10 years. The Sentra you will buy will get and EPA rating of 39 mpg on the highway, though Nissan created a special model called the FE+ which gets 40mpg. Nissan did that so it could advertise 40 mpg on all its billboards. Maybe FE+ stands for “Forget it Exists.” This does not diminish the fact that 39 mpg highway is utterly amazing in a car this size at this price point.

CVTs Work (Unfortunately)
In order to achieve the high mileage number in the 2013 Sentra, Nissan again employs its CVT transmission, this time coupled to a 1.8 liter engine. Yes, all auto writers hate CVTs, but frankly this is where a transmission like this belongs, in the small commuter car world. Most customers will never know or care it is there.

Macy's Styling for Gap Prices
If you want your 2013 Sentra to be a mini-me Nissan Maxima, you can outfit it with leather, voice activated Nav, a Bose sound system and many more features that just 10 years ago were found only on the most exclusive models in the world. For example, LED headlights and taillights are now standard. Audi, BMW, and Mercedes (oh, and Infiniti) are still trying to pretend these offer some exclusivity, never failing to mention them in every press release on a new model. The new Sentra also looks just like the Maxima/Altima. The taillight and front grill treatment is derivative of those two models. In order to stretch the volume, but not the car, Nissan moved the wheels out to the corners a bit. Frankly if you showed a picture of this car to 100 auto writers, 80 of them would guess it was an Altima (20 would have no idea what it was. They don’t work here).

More could be said about this car, but that should wait until after the new model is driven and prices posted, which could be this month. Suffice it to say, this could be the most important Sentra since the legendary Sentra SE-R.

Video courtesy of NissanAmericaNews and Youtube.com

Anonymous wrote on August 31, 2012 - 6:01pm Permalink
I think you got something wrong here in your article. "According to the US department of energy the 2001 Altima had a fuel economy rating of 20 city and 28 highway, 23 mpg combined. This new Sentra is able to get 34 mpg combined" Is it a Sentra or Altima??? The entire article is about the Sentra.
John Goreham wrote on September 2, 2012 - 5:51pm Permalink
Read the prior sentence and it makes sense. I compare the previous generation Altima to this new larger Sentra. The point is that the new Sentra is the same size and is superior in every way, particularly fuel economy. Thanks for reading though :)
Nicolas Zart wrote on August 31, 2012 - 8:01pm Permalink
It's about time Nissan did something about the Sentra. It was so boring, at least for my tastes... or lack thereof. But I'm waiting for a twin-turbo charged V8 with a plug-in hybrid platform underneath... and batmobile wings, but I won't hold it against them if they don't.