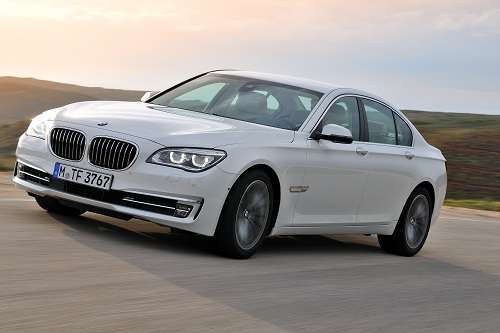 BMW has refreshed its flagship sedan and the 2013 7 Series sets a high bar.
Advertisement

In most of the world except the United States, the 2013 BMW 7 Series is a limousine. The current generation 5 Series shares its platform and the engines and drivetrains tend to play follow the leader with the leader being the 7. Many of the features of the 7 Series are oriented towards impressing those who want a very technical and powerful automobile and this new version certainly keeps that tradition alive. The question is, if you are riding in the back typing on a laptop, do any of the details really matter? The changes to this new car answer that with a qualified “yes.”

BMW Vision System
Over the past few years all luxury cars underwent a transition from Xenon headlamps to LED accented Xenon. The final step in the LED path is now here and the new 7 Series features what BMW calls in its press materials “Full-LED front headlamps.” Thankfully, the corona style accent lighting carries over. That subtle light ring gives the car a very cool look and makes the car instantly recognizable as a BMW. There is also a trim row of LEDs for styling effect. BMW’s version of auto-dim headlights is employed and is called “Anti-dazzle LED High beam assistant.” The most interesting light feature is Dynamic Light Spot with pedestrian recognition. A sensor detects a living creature ahead by its heat signature. The car then uses a headlight to cast a spotlight on the person or animal. The system works at a distance beyond human vision, so essentially it brings the drivers attention to the hazard before they could have with just high beams. This feature is unique to BMW in the premium car segment.

BMW Efficient Power
Adding more thrust to the 7 Series is like bringing coal to Newcastle, so BMW is focusing instead on efficiency. Yes the powertrains will have bumps in power, but the real news is the fuel saving technology now included. Auto Stop-start is now part of the package as is a coasting function. BMW’s second generation Driver Experience Control switch with Eco Pro mode helps to promote fuel saving habits. The car also has brake energy regeneration. The eight speed transmission helps with fuel savings as well. Six, eight, and twelve cylinder engines are available as is a powerful diesel.

Comfort Upgrades
The suspension changes all point to driver comfort and reduced fatigue on long journeys. Self-leveling rear suspension design, newly modified rubber chassis bearings and other changes all aim to make the ride more comfortable. It is hard to hide the fact that BMW seems to be talking as much about the person being driven as it is the driver.

Sophisticated Electronics
Inside BMW continues to evolve the infotainment systems. The driver’s display changes according to need or wish. The BMW Professional navigation system has sharper detail and the graphics include a 3-D mode for use in the city. The total number of updates and changes to the electronics of the car is too numerous to list, but suffice it to say they put this car into a category of maybe 3 or 4 of the most advanced in the world.

The new 2013 BMW 7 Series continues to set the pace for advanced premium sedans with no compromises.