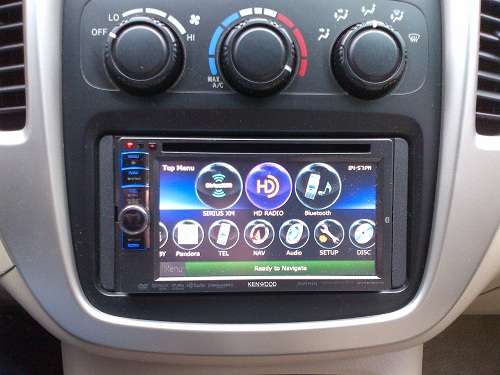 Navigation and stereo rules when shopping for a used car

A recent J.D. Power and Associates survey highlights the importance to shoppers of car audio and navigation. Buying a certified pre-owned or used vehicle does not have to mean living with old sound and navigation technology. Here is what you need to know.
Advertisement

When shopping used or certified pre-owned (CPO) the buyer is faced with a choice. Either buy a vehicle without a factory system, or buy a system the car came with that may now be older technology. J.D. Power and Associates did a survey asking buyers what was important to them and the majority include these parts of a car as their most important considerations. Here is what you need to know in order to come away with a new-to-you vehicle with a system you will be happy with for years to come, and can later sell on to buyers looking for a good system.

Start with Bluetooth
Connecting one’s smartphone to anything with a cord is dumb. Holding a smartphone to one’s ear while driving a car is dumb. Don’t be dumb. Figure out before you buy how you will get the vehicle equipped with Bluetooth. It may come that way. Most economy cars do now, but just a few years ago it was an option on even expensive cars. All is not lost if the car didn’t come with Bluetooth. See the next section for hope on that front.

And it is not just phone calls you should be concerned with. Why connect an iPOD or smartphone to a car as you jump in and out? With Bluetooth you can send the music library from your smart phone to your car’s audio without any physical connection. Pandora and most of the newest audio apps work this way too. Don’t buy a used or certified pre-owned car that isn’t capable of fully functional Bluetooth without a plan on how to add it. Even if it is not important to you, when you decide to trade the car it will come back to haunt you as we explain below.

How To Know If Can the Infotainment Can Be Upgraded
Take a look at the photo with this story. This is a 2007 Toyota Highlander with touch screen navigation, HD radio, Pandora, Bluetooth audio and phone, hands free calling, satellite radio, subscription free real time traffic alerts, and an iPOD connection. The new term for a package like this is “infotainment.” In 2007 there were no Toyota products that offered this set-up. This upgrade was possible because the Toyota (single cassette) sound system with no Nav was all contained in what is called a double-DIN space. That is a standardized space that car audio and Nav slide into. Since that slot was there in the car a huge selection of modern aftermarket systems were available to easily fit the car. The upgrade was simple and relatively affordable.

Not all cars have this type of slot ready to accept an upgrade. Find a reputable car audio shop in your area with an expert on hand (they all have them) and ask that person if the year make and model of the car you are considering has the double DIN space. Don’t trust the dealership selling you the car to tell you. Many car salespeople don’t even know the term. It is hard to tell by looking too because the car makers overlay a trim piece that can make the system look like all the parts are individually installed in the dash. Don’t despair until you ask an installer.

If the vehicle you like does have this space, we suggest you seriously consider finding that vehicle used WITHOUT the manufacturer’s Nav and then upgrading by having a professional installer put in a modern system. The system you get will be better than the one the car would have come with, and it will be less expensive as well. The new system you get is also easy to install by a pro. Most of the time there is a special adapter that allows the installer to simply click all the wires in place with no cutting or splicing. It is simple and done in one step.

Reasons Aftermarket May be Better
Aftermarket systems like the Kenwood/Garmin unit shown in the example can usually allow the driver or a passenger to input instructions to the Nav while the vehicle is moving. Many manufacturers like Lexus do not allow this. We are not advocating you or a passenger tap “Points of Interest” and then the “coffee” icon, but on a lonely stretch of highway there are worst things you can do in a car. It is nice to have the option.

Aftermarket systems also have the advantage of time. Since they are newly designed, apps like Pandora and other apps that were not yet invented when the car was built will likely work much more smoothly. In the case of the Highlander shown album artwork is displayed when the artist’s song plays and the content of the radio stations is displayed. By comparison, a more modern Lexus system tested did not have that capability.

Pre-owned Do's and Don'ts
Do not buy a CPO vehicle without Navigation and Bluetooth without first knowing if the vehicle can be upgraded per the above method. If you decide you must please see the section below about On Star FMV. The reason you should not buy a CPO car without either a double DIN space in the dash, or an existing Nav and Bluetooth setup is trade in value. When you go to sell this vehicle it is going to be so behind the times you will likely not get back as much as you would have spent on the added cost of a similar car with the more modern infotainment. In a just released J.D. Power and Associates study 67% of those surveyed said that they wanted smartphone integration and would pay $250 for it, and 58% said they wanted wireless connectivity and would pay $300 for it. That survey released today was flle dout by drivers you might be trying to sell this car to in 3 years.

Certified Pre-Owned Nav Warning
Be careful with Certified Pre-owned cars because sometimes the built-in navigation equipment is outdated and may not work where you live. Did you know that Lexus Certified Pre-Owned vehicles do not come with the most recent software upgrades to their navigation system? We didn’t either until a Torque News Staffer tried to buy a CPO Lexus RX350. The dealer in question advised that the upgrade costs hundreds of dollars and since the navigation isn’t technically “broken” the most recent software release is not installed as part of the certification process. Is that a problem for most buyers? Maybe. In Rhode Island for example the major route through the capital city of Providence was moved. In a Torque News test of a Lexus Navigation system with 2010 software the navigation system did not know how to deal with this change and it was hard to use in the state’s largest city. Before you buy any CPO vehicle negotiate to have the dealer install the latest software into the navigation system.

Used Car OnStar FMV
One thing new cars used to have as an advantage was telemetrics systems like OnStar from GM and Entune from Lexus. These systems offer hands-free help with navigation, points of interest, and things like dining suggestions. They can also call for help in an accident automatically, and they work as a stolen vehicle recovery system. In the past that was something the car had to come with. However, OnStar now has an aftermarket product that allows any car to have this, and it is very affordable. The system can also integrate your smartphone via its own Bluetooth connection, so it solves that problem as well. In a car that does not have a double DIN space, and does not have navigation, OnStar FMV is an excellent option. We tested the system fully and you can read the full review by clicking here.

Some Final Suggestions
If you do buy a certified pre-owned car, the dealer should also clear the navigation “Home” and previous destinations for you and then clear the Homelink garage door opener of its settings. Most dealers are happy to do this and it does not take long. Next, have the salesperson or another dealer employee help you synch your phone’s Bluetooth system with your phone and show you how they did it. Be aware this should be done after buying as the address book will likely be uploaded to the vehicle’s memory. Ask the dealer to include the separate navigation and infotainment handbook (they often come on DVDs). The owner’s manual does not always include this section and it is easy to overlook. You should have already negotiated the Nav system software upgrade, but it is worth verifying that was done before taking delivery.

Buying used or certified pre-owned can be a great opportunity to get a great car at a great price. Be sure you take time to consider the infotainment set-up as carefully as you do the other aspects of the car and it will return the favor when you sell it on.

Derek Laughlin wrote on June 15, 2018 - 11:15pm Permalink
Decent article. Would be great if all of said information would happen. - one thing I do disagree with is Bluetooth. Bluetooth, to me, instantly means decreased audio quality, delays, etc. I agree with the hands free factor. However I am not so bothered by a 1m .5 foot coaxial that it is "dumb" and when my audio quality surpasses any shitty Bluetooth audio. Trust moe I've tried, from JBL - (one of the leaders as far as syncrosity in the field) Bluetooth is good technology, but until further advances I don't. Count on it.
Olivia white wrote on March 13, 2020 - 4:45am Permalink
This article deals with every aspect of used car buying and you are advised to prepare well using this guide before going to buy a used car