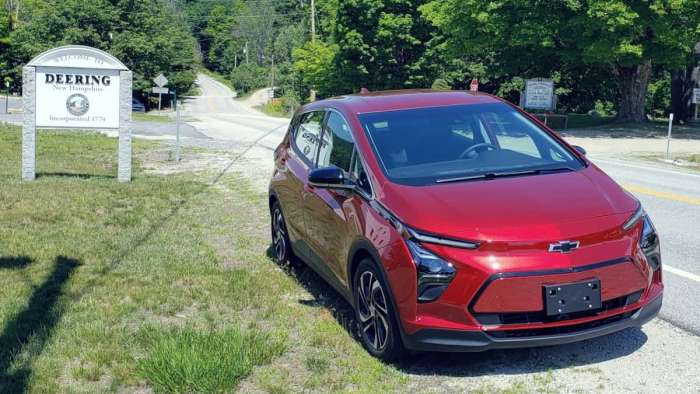 If you are of the opinion that weight is a spoiler for EVs, drive a few.
Advertisement

For decades, automotive enthusiasts have prattled on about the need to reduce weight in passenger vehicles. As an engineer by training and past vocation, I get it. Mass means more energy use and a tendency to resist acceleration, turning, and stopping. Tiny low-slung cars like Miatas benefit from added lightness and therefore, your daily driver or utility vehicle will too. Rubbish. The truth is, the most energy-efficient vehicles in America are also the heaviest, and they happen to handle and stop perfectly well. Coincidental to this, they are also the quickest and fastest vehicles on the road.

Electric vehicles are turning the opinions and past observations of armchair engineers upside down. We can debate the theoretical merits of electric vehicles with less weight, but do we really need to? Affordable EVs like the Chevy Bolt, which has been costing buyers less than $30K for years, are downright quick and fun to drive. Newer performance EVs, like the Ford Mustang Mach-E, are outstanding to drive on backcountry roads and can smoke most ICE vehicles in their price range in a stoplight sprint.

In our most recent electric vehicle test, we took the 2022 Chevy Bolt 2LT on a country mountain road that we know to be one of the best in New England for spirited driving. You can see the road there in the image (New Hampshire Rt. 149). This road has speed limits that allow you to enjoy a vehicle, and really feel how it steers, turns, and stops. We know this road from testing sports cars like the Miata there. The Bolt was an absolute joy to drive on this classic back-country road. Even with its low rolling resistance tires and upright shape, the Bolt is a vehicle that you can have fun with on such a trip. At its $30K cost point, this vehicle provides a lot of enjoyment while still managing to be one of the most energy-efficient vehicles ever created.

But how can this be? The Bolt weighs in at 3,700 pounds. For reference, that's about 700 pounds or over 20% more than a sporty vehicle like a Honda Civic Si four-door. We are not saying they feel the same. Just that the Bolt is a great vehicle to drive in this situation. The lighter Civic has triple the energy costs of the heavier Bolt.

There are two secrets to the success of EVs when it comes to driving satisfaction. First, they are new designs. They are rigid, and their centers of gravity and weight midpoints are all pretty much ideal. The batteries are low in the vehicle. Below the floor. And in many cases, they are also placed in the vehicle in a way that helps to offset the other heavy parts. If designers wish, they can easily make a battery-electric vehicle have a 50-50 weight distribution. Combine all of these factors and you get a vehicle that feels great when you steer it in fun settings.

The second big advantage EVs have is torque. It’s a shame that the American enthusiast media have placed so much emphasis on peak power over the past century. It’s an easy-to-use number, but peak power has a lot less to do with driving satisfaction in real-world conditions than you may think. Almost nobody uses the peak horsepower of a passenger car on a normal trip. Torque, on the other hand, matters a lot. EVs have more torque when you want it than equivalently priced conventional vehicles do. That’s why a Tesla Model 3 moves out from a stop in such a satisfying way. It’s also why a Jaguar I-PACE can make you feel like a shell coming out of a Howitzer if you wish it to. And it’s why stock all-wheel drive electric cars like the Tesla Model S can simply smoke heavily modified rear-wheel-drive gas-powered muscle cars in a drag race. And do it for a lower cost.

Slowing down a passenger vehicle is also not rocket science. If you want short, repeatable stopping distances, simply make the wheels appropriate to the task and use big rotors and calipers. Most automakers outsource this to Brembo anyway, and Brembo can make brakes to stop an EV just as well as it can a car with an old gasser powertrain. The funny thing is, in real-world driving EVs benefit from one-pedal driving. It adds fun to the drive, and many cars, including the Bolt, allow you to vary the regen force with a paddle. A clever homage to the old days of gassers with sticks, paddles, and other no longer necessary doodads.

Nothing anyone who drives EVs regularly can say will convince an old-school “car nut” who has not yet driven a performance EV that they are fun. It doesn’t matter how many records Tesla breaks or races it wins, the vintage and muscle car folks will still think more displacement, a cold air intake, and an exhaust-ectomy is all that is needed to turn their favorite out-of-date ICE model into a world-beater. We’ll just have to wait them out. Dodge isn’t waiting. It’s already disbanded its SRT performance team, and the same brilliant designers and engineers who created the world’s best funmobiles of the past decade will be re-assigned internal or external to Stellantis working on EVs, which most clearly are the performance cars of the future. At least according to the top dogs at Dodge.

If you have never driven an EV, grab one to drive the first chance you get. Point it into some sweeping turns, hairpins, and left-right switchbacks. It only takes a short drive to dispel the myth that lightness is the most important part of a car’s design.

Jason wrote on July 6, 2021 - 4:57pm Permalink
I'd be curious to see a comparison showing the data of how the handling and braking of these EVs differ for dry roads versus wet, snowy or icy roads. And then compare that to lighter, ICE vehicles. To me, the data for the worst conditions is more important than the data for the best conditions. I'm not as concerned which vehicle is faster in a drag race on dry roads. If heavier vehicles performed better in the worse conditions, then I'd say that lightness is overblown. Though, it is generally more expensive (for the suspension, tires and brakes) to make a heavier vehicle perform like a lighter one. This extra cost must be offset by the energy savings of the powertrain over a certain amount of time, however long that may be.