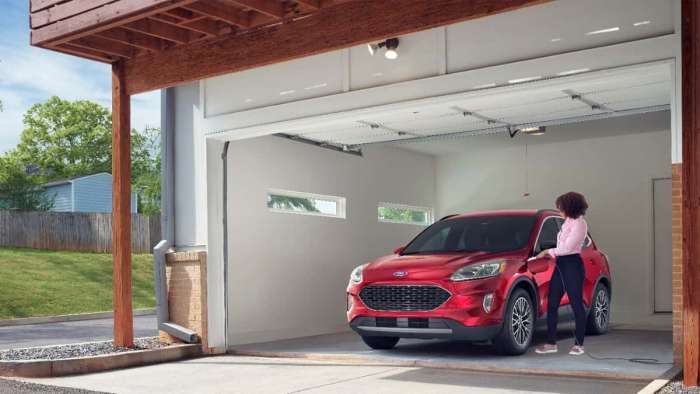 The all-new Ford Escape plug-in hybrid electric vehicle (PHEV) has just stolen the limelight from the highly anticipated Toyota RAV4 Prime. With an EPA-estimated 100 MPGe energy rating*, the Ford Escape PHEV is now the affordable crossover electric vehicle efficiency leader. Toyota says that its RAV4 Prime will have a 94 MPGe rating once certified. Not too shabby.

“The original Ford Escape was the world’s first hybrid SUV and the all-new Ford Escape Plug-in Hybrid represents how far we’ve come in technology and efficiency,” said Hau Thai-Tang, Ford chief product development and purchasing officer. “The all-new Escape plug-in has more power and more passenger space than the Fusion Energi plug-in, as well as up to four times the cargo volume behind its second-row seats.”

With a starting price tag of about $37K, the Escape hybrid also looks like it will slightly undercut the RAV4 Prime's starting price. However, Ford did not say specifically what the maximum federal tax credit this vehicle qualifies for, so we will hold off saying that for sure. The Toyota RAV4 will cost a buyer in an EV-friendly state like Massachusetts about $30K after incentives. And that is before dealer discounts. These two electrified vehicles will cost an EV consumer able to take advantage of EV price incentives about half of the similarly-sized Tesla Model Y's $54,190 current starting price.

Ford'sThai-Tang commented on the balance between battery size and affordability, saying “Ford Escape Plug-In Hybrid is that ideal balance our customers want.”

The Ford Escape PHEV has an EPA-estimated all-electric range of 37 miles*.

*Torque News has not yet seen published EPA data to verify Ford's claims of the EPA estimates in this story but we have no reason to doubt their accuracy.

DeanMcManis wrote on June 8, 2020 - 8:25pm Permalink
Basically Ford repackaged the Fusion PHEV drivetrain into the new Escape crossover. That's good news that Ford is staying in the EV game, even though they are abandoning all of their compact cars. And it is good that they haven't gone backwards because they kept their proven plug-in hybrid drivetrain. Honda doesn't yet offer a plug-in hybrid crossover, and they have no sign of building a proper BEV model at all for the U.S. But looking at the Escape PHEV and the Toyota RAV4 Prime, it's no contest (for me) since they weigh about the same, and the RAV4 Prime has over 80HP more than the Escape for only a small economy advantage. The upcoming Nissan Ariya also looks like it will be very competitive in this EV space as well. The base Ford Mach-E Select, and entry RWD Model Y due early next year should have a price just over $40K when they come out, which puts them in the running as well.