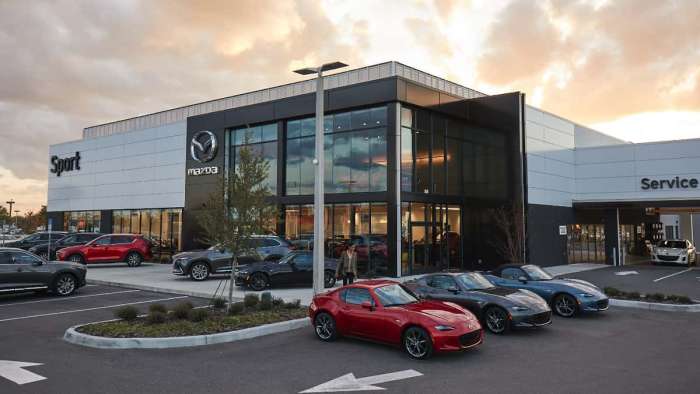 We did an informal poll of Mazda CX-5 owners to see how they view the brand. We found the results very interesting.
Advertisement

Mazda has been working steadily towards the goal of moving up-market. Today, many automotive brands are evolving. Brands such as Jeep with a past identity have started to shift to new identities. Others, like Tesla, have defied definition by existing in parts of multiple markets. 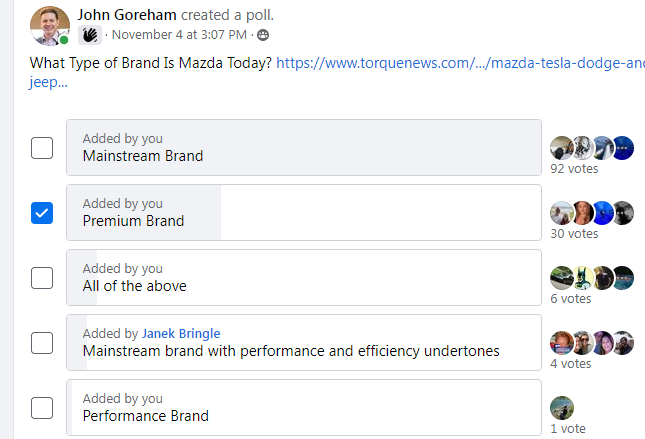 To obtain some data on how owners of Mazda vehicles view the brand that made their rides, we conducted an informal poll in the popular Facebook Mazda CX-5 Owners Club. The poll asked one simple question, “What Type of Brand Is Mazda Today?” The poll had an embedded link to a Torque News story on the topic for those who needed more background on the query. Under the poll question, we added four categories. They were, “ Mainstream Brand, Premium Brand, Performance Brand, and All of the Above.”

Related Story: European vs. Japanese Cars: Why One Doctor Switched From a BMW X3 to a Mazda CX-5

92 owners responded that they view the Mazda brand as a mainstream brand. Two members voiced opinions using the comments section that we found very interesting. The comments seem to lend validity that Mazda’s upmarket movement is being noticed. The first comment was “Mainstream that's slowly going premium.” The second comment was, “They’re on their way to becoming a premium brand, but aren’t quite there yet.”

30 members voted that Mazda is now a premium brand. That total includes my own vote. We own a Mazda CX-5 Grand Touring that my wife picked out and purchased before we were married. One comment stuck out with regard to Mazda’s being a premium brand in the eyes of some owners. It was, “The BEST thing Mazda has going for it right now with their current generations is avoiding CVT transmissions…” We slightly edited that comment to remove some other brands the member called “trash.”

Related Story: Mazda, Tesla, and Jeep Have Re-Written the Rule Book In the U.S. Auto Industry

Only a single member of the group voted for Mazda being a performance brand. However, a member added a choice of “Mainstream brand with performance and efficiency undertones.” It would seem a few owners are familiar with the Mazda SKYACTIV branding.

Our test this week of the new MX-30 reminded us of some of the ways that Mazda has moved upscale. The adaptive headlights, heated steering wheel, premium seating materials, and head-up display in a vehicle that will likely have a consumer cost of between $20K and $25K is unprecedented in our testing.

What’s your opinion of the Mazda brand? Do you see Mazda as a premium brand, mainstream brand, or a brand that is someplace in between? Tell us in the comments below.

LG's New EV Battery Plant Is a Welcome News for Tesla
Tesla Giga Berlin's New Hurdle: It's Not Only the Gov't, but Now Tesla Itself
END_OF_DOCUMENT_TOKEN_TO_BE_REPLACED