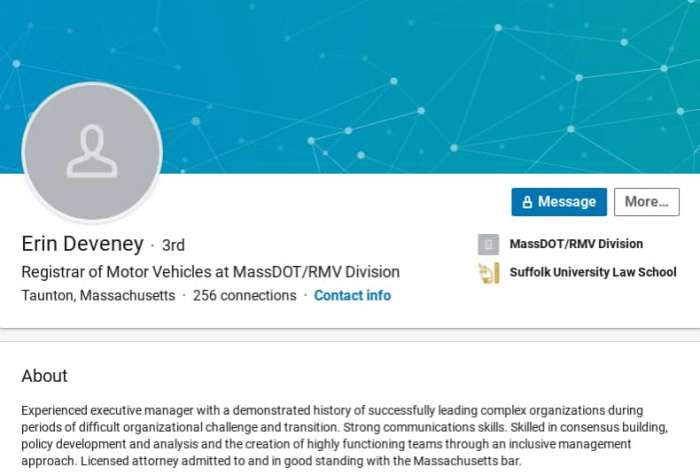 The head of the Massachusetts RMV resigned today after reports that the driver who killed seven should not have had a Mass. license.
Advertisement

The registrar of the Massachusetts RMV resigned her position today after internal reviews showed that the man accused of killing seven motorcyclists should not have had a Mass. driver's license. Local and international news outlets broke the story last night that Erin Deveny would resign.

The tragedy that killed seven Marine Corps Club motorcyclists should never have happened. Sources say that the driver accused with responsibility for the accident crossed the median and struck the riders in New Hampshire. For those not from New England, New Hampshire is a very popular destination for motorcycle clubs. Endless open country roads attract thousands of riders, often in huge groups during the annual Bike Week, to the rural state's roads.

Earlier this week the driver of a Ram pickup truck towing a trailer is reported by witnesses to have crossed the median heading straight into a group of riders. Many were killed, more were injured and the truck ended up in flames by the side of the road. Police say that the driver was operating the vehicle as an employee of a company. The driver is reported to have had a commercial drivers license (CDL). However, the recent news is that the license should not have been valid.

After alleged drunk driving resulted in the driver's arrest in Connecticut (a neighboring New England State that cooperates with the Mass. RMV), the RMV of Connecticut generated a report that would flag Mass. to review, and possibly revoke the driver's license. Boston.cbslocal.com reports, “This review had not been performed by RMV personnel as of June 23, which is why the May 11 chemical test refusal does not appear on Zhukovskyy’s driving record and why his license had not been suspended in MA,” MassDOT said.

The governor of Mass.'s office released a statement saying in part, "Governor Baker and Lieutenant Governor Polito are deeply saddened by this horrific tragedy and ordered an immediate review of the Registry’s processes for handling state to state information sharing.” There is no news suggesting the Republican governor would resign.

The driver of the vehicle is reported to be a Ukranian National with U.S. residency who has had at least one previous drunk driving arrest in Massachusetts. The driver is also reported to have crashed a trailer in Texas earlier this year. The Boston Herald reports, the driver's court file includes a letter dated Sunday from a deportation officer from Immigration and Customs Enforcement requesting details on his 2017 heroin and cocaine convictions.

This is not the first time that a Massachusetts transportation official has lost a job following a fatal roadway accident. In 2006, tons of concrete fell from a Big Dig tunnel after roof bolts failed, killing a motorist. Massachusetts Governor Mitt Romney fired Matthew J. Amorello, chairman of the Mass. Turnpike Authority.

Top of page image courtesy of Linked In.