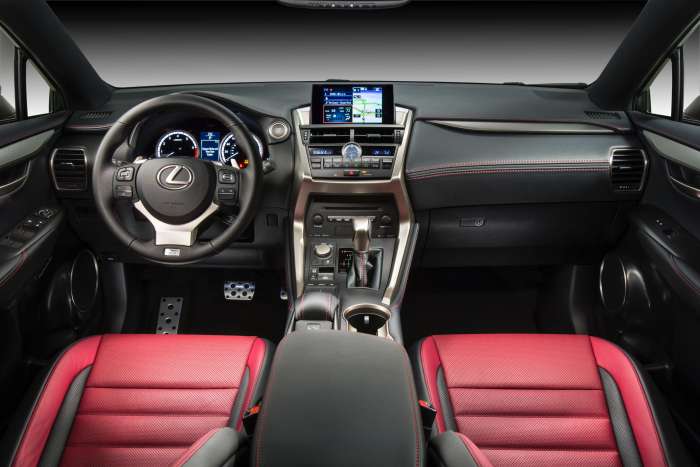 Lexus is creating a new look for its interiors that moves away from the wood trim of our parents and grandparents' cars.
Advertisement

The coming 2015 Lexus NX 200t and NX 300h compact crossovers will introduce a host of new interior features to the Lexus line. Although the big news has been the addition of a new 2.0 liter turbocharged engine to the Toyota Lexus family in the NX 200t, the interior of the new car will make a big impression on buyers shopping for a new Lexus crossover.

The main information panel is now added to the top of the center dash. It sticks up from the dash in the way the CT 200h’ screen does. This is all the rage these days and every car from the Mazda3 to many Audis use this new look. To our eye it looks like the screen was left out and added back after the design was complete (we know that isn’t the case). Some say it looks like an aftermarket NAV unit sitting atop the dash. We would be interested to hear our readers’ thoughts about this new design trend. We may be missing the benefits of this look and are open to understanding it better.

The new HMI (human machine interface) for Lexus’ Remote Touch Interface is a touch-pad style controller. It will be the first thing that Lexus owners looking closely at the new NX 200t will notice. Lexus has a bit of ground to make up in order to match BMW, Audi and Mazda with regard to communication, information, and entertainment controls (comfotainment?). This could be the move that brings to them to parity. Another new item that many will appreciate is the wireless phone charging tray that will work with Qi compatible phones. As technology advances, our phones are becoming a part of the vehicle’s on-board systems. Making the phone at home going forward will be something every manufacturer will be doing.

Lexus is also upping the comfort level in the 2014 NX 300h and NX 200t. The center stack now has padding for the driver’s right knee and passenger’s left. This is a move right of the sports car playbook and will be a cool addition to the new NX. It will also differentiate the NX from the Toyota RAV4 which uses a floating stack design with no center tunnel. Lexus is wise to try to keep these two vehicles unique from one another. The seats are quilted too which will add a bit of a comfy feel to a car that is leaning towards edgy.

The doors feature exterior LED door handle lights on the new 2015 NX series. Inside the doors show off the new silver metallic trim and raised red (when the interior is black) stitching. Thankfully, the new NX will not have the wood trim our grandparents’ cars did, but a more modern soft materials and metallic theme throughout.

As the photos show, Lexus made the correct moves here with the NX. This new crossover will share much with the IS and RC sports car lines and less with the RX and LS luxury vehicles. Lexus has begun to perform dull-ectomy surgery on its new vehicles and the results are going to give the German car makers and German car buyers something to think about.

cameraman611 wrote on August 25, 2014 - 2:07pm Permalink
I drive a 2010 RX350 and anticipate the introduction of the NX with one exception. The pop up Nav and Info and whatever else you can think of "Distraction Display". In my opinion its NOT the best idea ever.... think way more distractions than "texting". Just hope it comes with an OFF and Park button or better still make it available as an option.