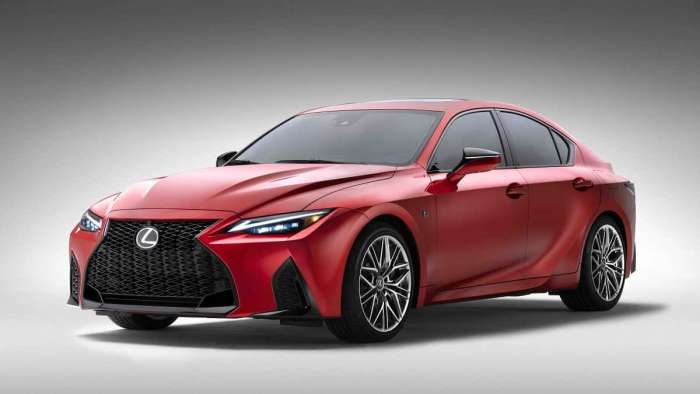 The legendary IS F earns a coda with a new IS500 F SPORT. We review how it will compare to the segment-leading Tesla Model 3.
Advertisement

Lexus has brought back the original IS F sports sedan formula for a last hurrah. The new model is called the IS 500 F SPORT and it will have the 5.0-liter V8 engine that made the IS F such an enjoyable vehicle to drive. We will let the Lexus enthusiasts drool over the fine details. We thought it would be more interesting to step back and compare the "new" Lexus to the sports sedan global leader in sales and performance, the Tesla Model 3. Specifically, the Tesla Model 3 Performance Dual Motor AWD. 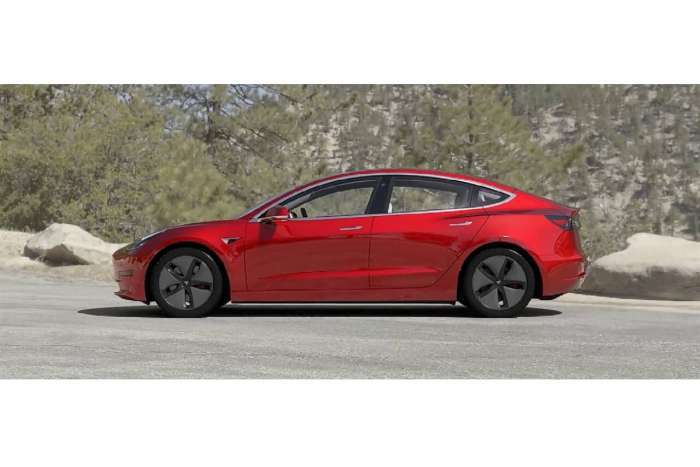 Modern sports sedans with battery-electric powertrains can do much better. One example is the Tesla Model 3 Performance. The Tesla can do that sprint in 3.1 seconds. It's all-electric torque is most of why it can, but the AWD system is a big help. Having dual motors, both of which are sitting over the axles, is a great way to distribute power.

Fuel Economy Lexus IS 500 F SPORT vs. Tesla Model 3
Lexus says that the new IS 500 F SPORT will earn a 24 MPG Highway rating from the EPA. So, figure about 19 MPG Combined. Not bad for a classic liquid-fueled car, but absolutely horrible in 2021 by any other measure. The Tesla Model 3 Performance earns a 107 MPGe rating Highway and a 113 MPGe rating Combined from the EPA. It has a range of 315 miles, about the same one can expect from the Lexus.

Cost Of Ownership - Tesla Model 3 Performance vs. Lexus IS 500 F SPORT
Every year that the IS F SPORT driver owns her vehicle she will pay $1,900 more each year in energy costs compared to a Tesla Model 3 Performance owner. So, over 10 years, the cost of the premium unleaded fuel that powers the IS 500 F SPORT will cost about $19,000 more than the Tesla owner will pay for electricity. That assumes energy costs remain the same as today. 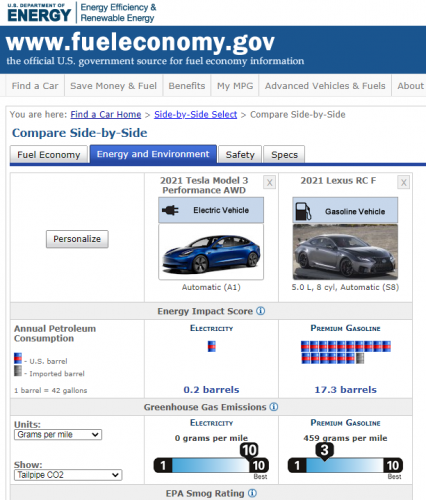 Tesla Model 3 Performance vs. Lexus IS 500 F SPORT - Carbon and Pollution Emissions
While the IS 500 F SPORT owner enjoys her new sports sedan she will generate about 459 grams per mile of tailpipe CO2 emissions. The Tesla owner will generate zero carbon emissions per mile. The Lexus IS 500 F SPORT will also likely earn a 3 on the pollution scale vs. the Tesla's perfect score of 10, with 10 being the cleanest possible score. We used Lexus' RC F which has a similar engine and design to the IS F SPORT for our comparison numbers in this section.

Tesla Model 3 Performance vs. Lexus IS 500 F SPORT - Pricing
Lexus has not announced pricing for its IS 500 F SPORT yet, however, the nearly identical coupe version, the RC F is priced in the high $60Ks. We priced out a Tesla Model 3 Performance using Tesla's configurator and came up with a price of $59,190 including red paint and destination charges.

Tesla Model 3 Performance vs. Lexus IS 500 F SPORT - Conclusion
As a former (happy) Lexus IS owner, this new V8 certainly brings back some memories. However, if Lexus is to earn the business of performance-oriented buyers today it needs a battery-electric powertrain. The new IS 500 F SPORT only serves as a reminder that Tesla is the dominant sports sedan in America today.

Arbuckle wrote on February 22, 2021 - 3:02pm Permalink
Lexus has statistically been a more reliable brand vs Tesla. A 7100RPM V8 will also sound invigorating to many people compared to the Tesla hum.
John Goreham wrote on February 22, 2021 - 3:52pm Permalink
Two good points. That V8 does have a nice sound (if you are the one driving it).
joseph gerbino wrote on February 22, 2021 - 6:44pm Permalink
Sad day for Lexus like always, the pig in the room, naturally aspirated is good for one thing big grunt but no torque, 395 is like a v6 Nissan Maxima. Should be a twin turbo v8 then it would mean business. Unfortunately this will yet again be a laughing stock in the performance community
Mark Day wrote on February 22, 2021 - 8:03pm Permalink
Let's not forget the battery pack replacement costs and generally low resale value of EVs, The inconvenience of range anxiety is another issue. If EVs made sense taxpayers wouldn't be forced to subsidize them.
Nana wrote on April 9, 2021 - 9:32pm Permalink
Wow. What a one-sided review. Hmmm let’s use criteria such as fuel efficiency and exclude other criteria such as fun factor. Guess who’ll win under those conditions?
Laurence wrote on August 31, 2021 - 6:51pm Permalink
Tesla may have screaming acceleration, but Lexus is not shabby. Apart from the track or the strip, rare opportunities to maximize Tesla. Plus I am happily reasonably assured that years from now my Lexus quality and performance will be similar to what I enjoy now.
Don wrote on October 11, 2021 - 12:14pm Permalink
Guns need bullets but knife don't. By the way, IS500 should be able to 100-200 in 9.x. How about Tesla...