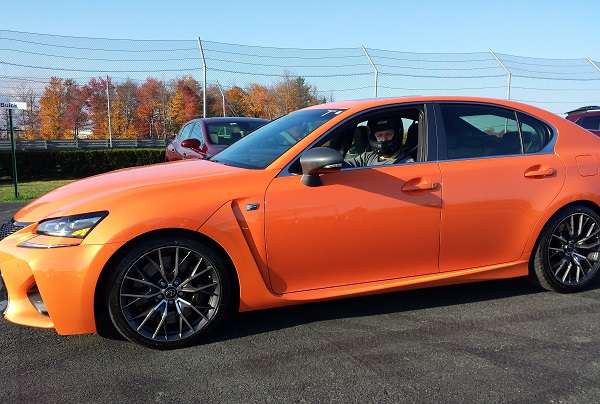 Impressions: 2016 Lexus GS F vs. RC F On Track and Comparison to the ATS-V

We track the four-door version of Lexus’ best track duo to see how it holds up.
Advertisement

This week Torque News traveled to the Monticello Motor Club for two days of on-road, on-track, and off-road testing. Lexus was good enough to bring two of our favorite cars, the mighty RC F coupe, and GS F sedan. Both have the same 467 hp V8 engine and amazing eight-speed transmission. Both have fantastic sport seats and are track-ready cars. So which is the better track-day car for a Lexus enthusiast?

Before we begin, let us tell you this is a seat of the pants story. As a semi-skilled driver-journalist, operating on a track that has been slowed with some chicanes to preclude the need for scraping less skilled drivers off the barriers, instrumentation testing would be a waste of time. Plus, Car and Driver has already proven that the RC F and GS F are equally fast on a racetrack. CD’s testing found them to be less than 1 tenth of a second apart on the Lightning Lap. So this is the way I see it after driving each back to back twice.

Before you even hit the track, the GS F has an edge. With a helmet on, my head, which ends six feet above my feet, touches the roof of the RC F. However, in the GS F, it does not. A minor thing? Maybe, maybe not. If you are 5-foot 11-inches or less in height, it matters not one whit. Above six feet, I think it does.

I didn’t compare them in any formal way, but the interiors appeared to me identical. Owners may know of some minor differences, but for track duty, both have the fantastic seats and easy to operate drive mode selectors. I used the same settings for both, and no, I did not invoke the most aggressive, secret setting to disable everything. I respect the car and the track too much.

As I stepped into the RC F another journalist asked if he could instead take out the RC F first. I said, “Sure, please do, I have driven it in the past and will take the GS F.” He entered the track, went half way around and then slid off putting all four tires on the muddy grass. Luckily, there was no damage. When we re-entered the paddock, the track officials confiscated my credentials. They thought it was me until Lexus explained what happened. There were TWO orange Lexus cars on the track. That delayed my track time a bit, but it was a good reminder to leave the car’s nannies on.

The GS F feels to me the same as the RC F. Others in attendance told me they felt GS F had more acceleration. It may have been just these two cars, or they may not have had the settings set identically ( I suspect that was it). I didn’t feel it was faster, but the GS F sounded louder to me on all my runs. If any owners can explain why that might be the case, I am all ears.

What struck me most was how similar both cars felt. I have read many times that the GS F is the better car, but I still don’t know why that seems to be the consensus. It became fashionable to diss the RC F, but it makes no sense to me.

Related: How the Lexus RC F Compares to the American Muscle Cars