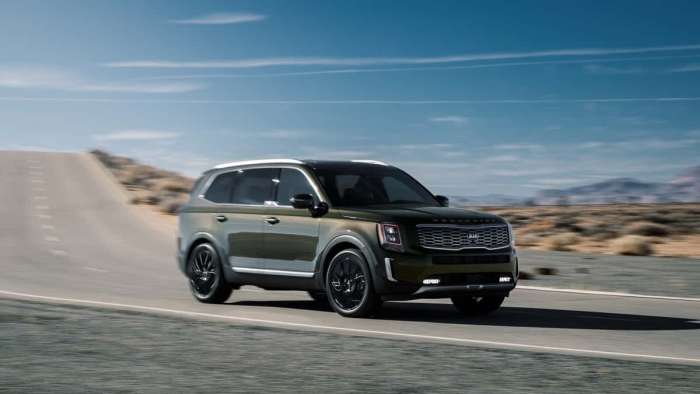 Both Hyundai and Kia are advising owners of their flagship SUV models to park outside to mitigate the risk of a fire. No solution is available at this time.
Advertisement

The National Highway Traffic Safety Administration, NHTSA, has announced two serious recalls related to the popular Kia Telluride and Hyundai Palisade three-row SUVs. The two vehicles share many components, among them a trailer hitch electronics assembly that is now the cause of some concern. In total, approximately 300,000 vehicles are included in the two related recalls.

According to NHTSA, the recall impacts both Kia and Hyundai vehicles. The impact vehicles are “...potentially equipped with a Genuine Kia (or Hyundai) 4-pin tow hitch harness installed as original equipment, or purchased as an accessory through a Kia (or Hyundai) dealership. Debris and moisture accumulation on the tow hitch harness module printed circuit board (PCB) may cause an electrical short, which can result in a fire.”

Letters sent to owners of Kia Telluride and Hyundai Palisade vehicles say, “Owners are advised to park outside and away from structures until the recall repair is complete.” This warning is reminiscent of the Chevrolet Bolt recall that has recently begun to be resolved. Parking facilities began to place signs saying the model was not permitted to park due to the fire risk and the manufacturer’s guidance.

A Hyundai document posted to the NHTSA recall website also notes that dealers have been ordered to stop selling affected vehicles. This is a very bad time for dealers to stop selling any vehicle, given the severe inventory shortages. Owners with a Kia Telluride or Hyundai Palisade on order may experience delays.

Hyundai says that owners can continue to drive these vehicles. A remedy is not yet available. Owners will be alerted via U.S. mail when updates to the recall occur.

If you own a Hyundai or Kia vehicle and wish to see if your vehicle is included in the recall campaign, you can find a link to the companies’ lookup tool below: