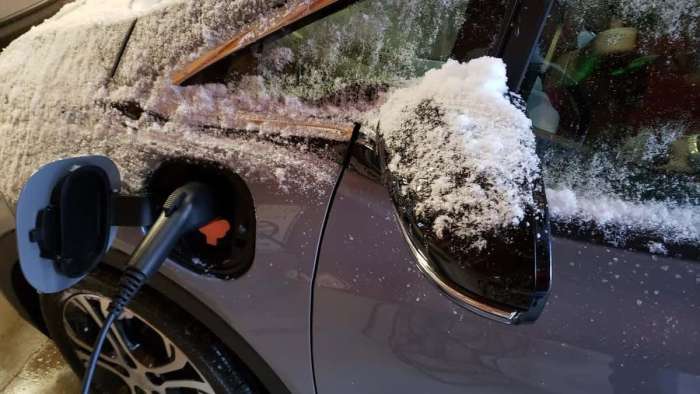 Chevrolet has given owners instructions on how to safely use their Bolt electric vehicle while the battery replacement recall rolls out. Winter is coming and could throw a monkey wrench into the mix.
Advertisement

The Chevrolet Bolt battery-electric vehicle is presently undergoing a recall about as serious as recalls get. Every Bolt of every model year and trim, new and unsold or used, is included in the recall. Fires have burned personal property and put owners in danger. Chevy is no longer selling new or used Bolts or Bolt EUVs. Chevy’s “Park Outside” mandate has parking garage managers nervous. Making things even more tricky for Bolt owners, GM reportedly issued a mandate that some Bolt owners park 50 feet away from other vehicles in parking garages and use the top deck of public garages. “No Bolts Allowed” signs on parking structure entrances are beginning to circulate on social media. If there is one silver lining it is that the Bolts owners have can at least be driven. The onset of winter is about to become make that bit more difficult.

Related Story: Big Mistakes To Avoid When Charging an EV In Public

Bolt’s List of Parking Restrictions
We’ve polled Bolt owners regarding how they charge their cars multiple times. Our findings are that about 90% or more owners charge almost exclusively at home. Most of those owners use a 240 V circuit in a garage. That circuit is now hard or impossible for many owners to put to use because GM has instructed owners not to charge inside their garages overnight. Those who use the Bolt to commute or take trips may need to charge overnight.

In addition to not charging inside overnight due to the risk of the Bolt catching fire and possibly causing the home to burn down, GM has other restrictions. Chevy has told owners to only use a portion of their Bolt’s range. Apparently, the Bolt defect that causes the fires is sensitive to the battery being too full or too empty. Chevrolet has thus limited the Bolt’s usable range significantly.

Here is what Chevy says: “Set your vehicle to a 90 percent state of charge limitation using Hilltop Reserve mode (for 2017-2018 model years) or Target Charge Level (for 2019-2022 model years) mode.” Chevy then adds, “Charge your vehicle more frequently and avoid depleting the battery below approximately 70 miles (113 kilometers) of remaining range, where possible.”

The upshot of these instructions intended to keep the Bolt’s risk of battery fires to a manageable level is that the new usable range of the earlier model year Bolt will be about 144 miles. More recent model year Bolts have more range, so their new range after the new limitations is 163 miles.

How Winter Will Make Chevy Bolt Owner’s Lives More Difficult
A range of 144 miles or 163 miles is still more than enough for most daily trips - assuming one has the time and opportunity to charge back up. With garage overnight charging off-limits, that is tricky for some owners who rely on that method to keep the Bolt range topped up to a reasonable level.

One aspect of all-electric vehicle operation is that cold weather makes charging take longer, the vehicle consumes more battery range to heat the occupant compartment, and the range is lower simply due to the operating temperature. This means that if one tests an EV in a normal winter north of the Mason Dixon line, the range displayed can be more than 30% lower than it would be in ideal conditions, which is what the 144 mile and 163-mile ranges are based upon. One AAA study of the 2018 Bolt found that its driving range in 20F conditions with the HVAC on was reduced to between 109 miles and 143 miles (depending upon test methodology used). Eliminate the top 10% and bottom 25% of the battery capacity and the winter range of the Bolt starts to look pretty darn short.

As a lifelong resident of the New England snowbelt, I can tell you that nobody likes to park outside in winter if they have a usable garage. Particularly those owners who need plowing to use the driveway during storms. 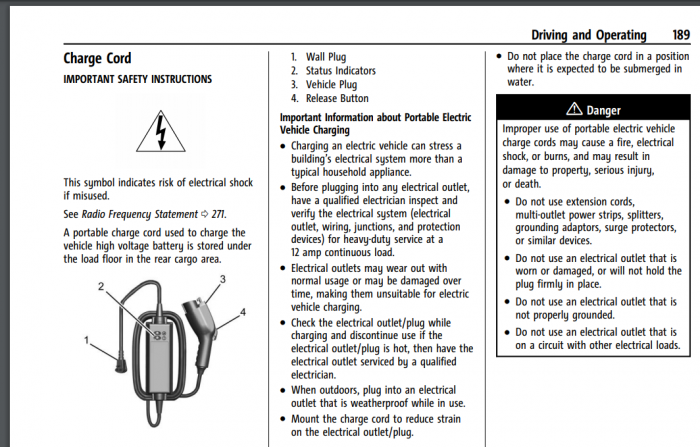 Extension Cords And Mobile Adapters Are a No-No
Folks who don’t own an EV may not realize that they can’t be plugged into just any receptacle. For the vehicle to charge at a meaningful rate, a 240 volt high amperage circuit is needed. If that special circuit is in the garage and no longer available overnight, an owner can use the 120 V mobile charger. However, Chevrolet states in its owner’s manual that owners using the mobile charger should only use dedicated circuits. As opposed to the circuits in most homes that serve many outlets. Chevy also says that its mobile charger isn’t compatible with extension cords.

A Summary of What Bolt EV Owners Now Face
Chevy Bolt owners now face an uphill battle with the onset of winter. Here is a list of charging dos and don’ts for Bolt owners awaiting a battery pack replacement:
-Don’t charge overnight in your garage
-Don’t let the charge drop below 70 miles
-Don’t charge to above 90% of the battery’s range
-Don’t count on being admitted to a public parking garage
-Don’t park in the covered area of a parking garage that does admit Bolts
-Don’t park next to other vehicles in garages that permit Bolts
-Don’t use the mobile charger on anything but a dedicated 120 V circuit (rare)
-Don’t use the mobile charger with an extension cord
-Do plan for cold-weather range reduction

This author is a big fan of the Chevy Bolt and Bolt EUV. Both are affordable vehicles that are satisfying to drive, offer practical real-world range (when not under a recall), and have outstanding infotainment systems. The Bolt was the 2017 Motor Trend Car of the Year, has a stellar Consumer Reports reliability rating of 5/5, and three of the six Bolt model years earned an IIHS Top Safety Pick award. Our hope is that this story will not age well and the Bolt recall will be completed prior to the onset of cold winter.