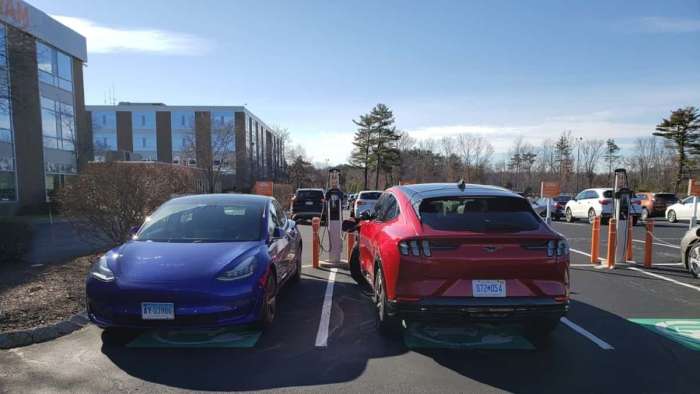 Big Mistakes To Avoid When Charging an EV In Public

Charging in public can be challenging. For new electric vehicle owners, we offer these tips to save time, money, and maybe your well-being. You EV veterans can feel free to fact-check us and add more tips below.
Advertisement

Charging up an electric vehicle in public can be intimidating. When we poll owners of EVs in Facebook clubs and forums, the majority say (admit?) that they almost never do charge in public, but rather, rely on home charging for their needs. As EV testers, we have the opportunity to charge in public quite a bit. Sometimes as a necessity, but more often as a “test” to learn how it’s done. After all, we need to stay current. Get it? Current?

Related Story: Charging an Electric Vehicle In Public Can Cost Triple What Fueling Up a “Gas-Guzzler” Does

A recent story we posted about charging up a Bolt at an EVgo DC fast charger (DCFC) caused quite a stir. More comments were posted to that story than any other EV story we have done in quite a while. The story highlighted why public EV charging can be quite costly if you are not careful. Some of our lessons here were learned from that one event, others from other events, and many from listening to experienced BEV owners describe what works best. 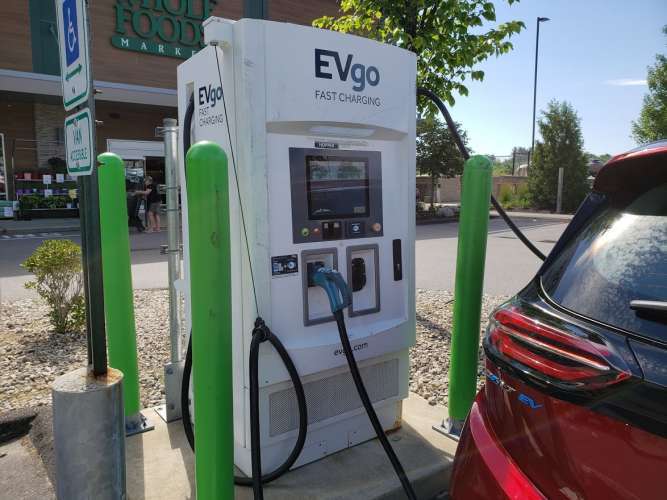 Never Charge Your EV to Full In Public
The EV community is still small. Like all groups of Americans, it has its own etiquette, norms, and rules. One of them is to never charge your EV to 100% state of charge at a public charger. There are two reasons for this. First, EVs accept a charge at a much faster rate prior to 80%. After that time, they slow down quite a bit, and adding in range miles or energy slows down a lot. By charging past 80% you are taking up a precious spot another EV owner may wish to use. And you will never know it because EV owners are looking at that charger usage online, not from the aisle near you.

The second reason is it will prove costly. How costly? We charged a Bolt to full from above 80% state of charge and it cost us triple the dollars per mile for energy that a gas-guzzling muscle car costs.

Never Arrive At a Charger You Don’t Have An Account With
When I first began testing EVs, the manufacturers would include a ChargePoint dongle on the keyring to pay for public charging. Swell folks those automakers. I used it a handful of times, and then one day it didn’t work. Some kind of SNAFU occurred and I was on the road with no way to pay. The charger I was at didn’t accept credit cards. In fact, I don’t think I have ever seen one that does.

When you get your EV, sign up for the phone app and/or RFID card account for every charger brand. Electrify America, ChargePoint, and EVGo are the three that dominate my area. Be sure your account works by testing it when you don’t need to charge (which is part of why I charged a Bolt on a DCFC when I was above 80% already).

Look Closely At Your Billing Plan
I have a level 2 Lectron brand charger at home that I use for almost all of my charging needs. Because of this fact, when I signed up for my accounts I always selected the plan that required no deposit. Don’t do that. If you plan to use public chargers, pick the most economical plan for your needs. By choosing the occasional-use plan with no deposit you may pay a LOT for electricity. More than for gas in a traditional car in some cases.

Read Charge Location Reviews Before You Show Up
While this is uncommon, I have driven to locations planning to charge that showed available spaces on the apps I use only to find they were in a locked area. They were not public at all. They served a group with keycards to the parking lot, but not the general public.

I’ve also noticed that many Google reviews note broken or hard-to-use chargers. “You need to prop up the handle with something,” is one review I recently read. Others note sketchy neighborhoods or that their car was vandalized. Google reviews are easy and free and they can be sorted by date. It’s worth a look to see if that free charger spot you may need is real or just a ghost.

Dude, Unplug and Move On
Circling back to the never charge past 80%, if you are not charging, get your car out of that spot. The social media clubs are packed with images of EV owners parked, but not charging in EV charger locations. The group members discuss harming the vehicle or the owner. Don’t be a jerk. 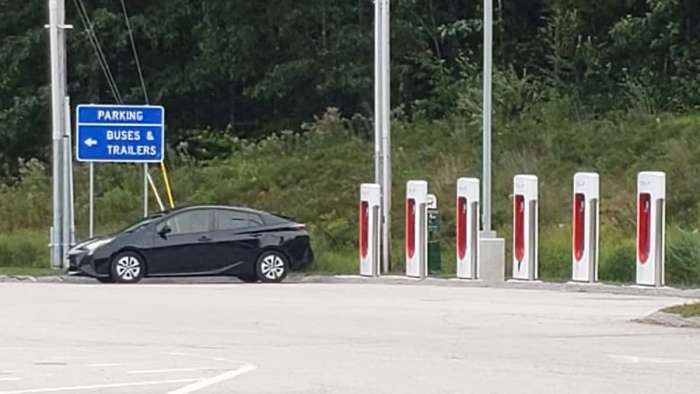 Tesla Chargers Are Not Public
This one may be obvious to some, but not every new EV owner realizes that Tesla Superchargers and even Tesla destination chargers are not for you if you have a Leaf, Bolt, or Mustang Mach-E. They are captive chargers that Tesla owners count on and consider their own private charging network. Which it pretty much is. So, no, you can’t charge your car there if you drive a “lesser” EV, and no, trying to hotwire one is not OK at any level. (It’s a popular topic) 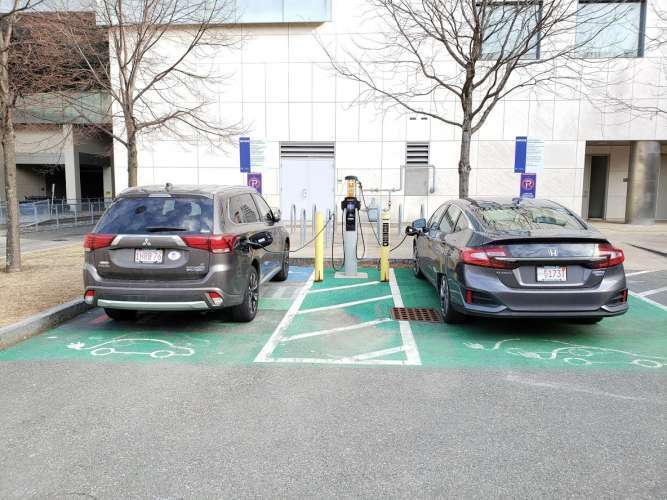 PHEV Owners Are Hated By Some BEV Owners
If you own a Prius Prime, Volt, RAV4 Prime, Clarity, Outlander, Niro, Ionic, NX, or one of the other many plug-in hybrid-electric vehicles, realize that some battery-electric vehicle owners (Tesla, Bolt, Leaf, etc) think you are a poser or worse. They hate it when you park in a public charger taking “their spot.” After all, you don’t “need” to charge. Their way of thinking is that the public charging grid is just for their special entitlement club and you’re not part of it. Just for the record, that is not the opinion of this EV tester. I’m pro-PHEV. Do what you like, just be aware that you are not one of the popular kids at the Whole Foods public charger corral if you have a PHEV. 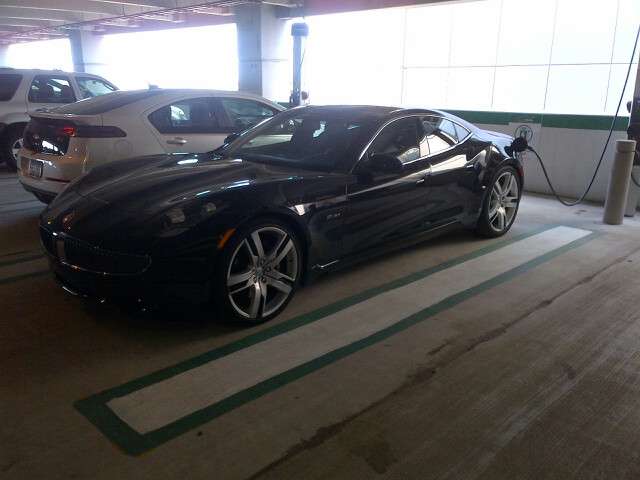 If You Park and Fly You Are Scum
If you drive to the airport, plug-in, and then fly someplace better than where you were, shame on you. This applies to Level 2 or higher chargers. Let’s face it, if we all do that, the one row of chargers at the airport serving literally millions of travelers are basically useless. It takes a handful of hours to charge up one EV on a level 2 charger. A person who isn’t coming back to that space until after their week in Cabo is hogging up a space that could have charged up dozens of cars that week. Airports should police this with time on the charger fees, and some do. This applies to hospitals and college campuses too. EV charging spots are not parking spots. Charge to 80% and move. Or charge at a level 1 (115 V) outlet in public with your mobile charger if that choice is available and you have days to leave the car.

Related Story: Why Level 1 Public EV Charging Makes The Most Sense For Many Scenarios

Just as gas-powered car owners know that the station with the “last gas for 200 miles” is going to be pricey, EV owners learn how best to energize their rides. The comments section below has unlimited space for more good EV tips. Please feel free to make some suggestions. We are certain we didn’t cover them all.

Timothy Boyer wrote on July 15, 2021 - 10:10am Permalink
Good article, I learned something. BTW, "...if you are not one of the popular kids at the Whole Foods public charger corral..." do you get a Kombucha thrown in your face instead of a cherry Icee?! ( ; ^ O
David Paul Hughes wrote on July 16, 2021 - 6:48am Permalink
TO ALL UK FOLKS THINKING OF SWITCHING TO AN ELECTRIC CAR AND FORCED TO JUICE UP VIA THE PUBLIC NETWORK, A, WORD OF WARNING THAT COULD SAVE YOU A SHEDLOAD OF GRIEF: Don't even think of using BP PULSE CHARGEMASTER. Go on the TrustPilot forum and absorb countless reviews reflecting that a staggering 91% of BP 'sufferers' (having been one myself I ditched them this very day) report massive dissatisfaction with what they laughingly call their 'service'. Don't just heed my words, look up for yourself what masses of others are similarly saying about this shameful 'outfit'. In a plethora of ways multitudes can testify that they don't give a damn about the vast majority of their customers. BP? In my opinion that translates as Beyond Pathetic. (Editor Note: This is product used in the UK. 88% of those who rated this product on TrustPilot gave it the lowest possible score of 1/5)
M W Warner wrote on July 18, 2021 - 11:21am Permalink
What is going to happen to all the Hazzardous Batteries? Why isn't adapters available so different vehicles can charge at all locations? I did learn why not to charge past 80%. Thank you for the explaination!