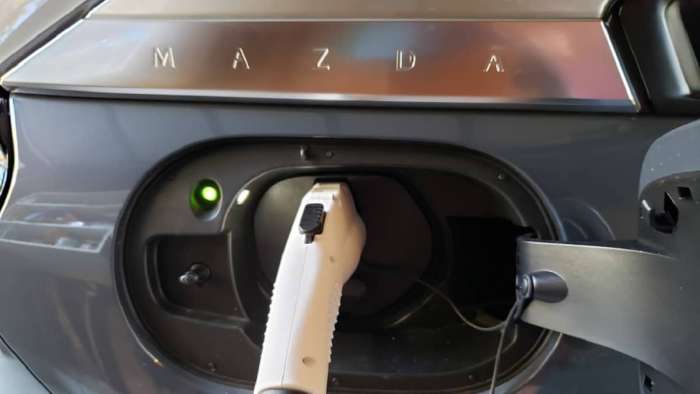 Step back and realize that Mazda sells more battery-electric vehicles right now in America than many much larger automobile manufacturers. Including our President's favorite.
Advertisement

The media can’t come to grips with GM being called an EV leader and Tesla being ignored. In a recent media event hosted by the President, GM received quite a bit of praise for being an electric vehicle leader. Of course, Tesla is the American leader in battery-electric vehicle development, sales, and pretty much any other metric you wish to apply except campaign funding by union membership. Tesla should have been the company being honored, but setting aside Tesla for a moment, GM was outsold by Mazda in the month that the President made this speech. 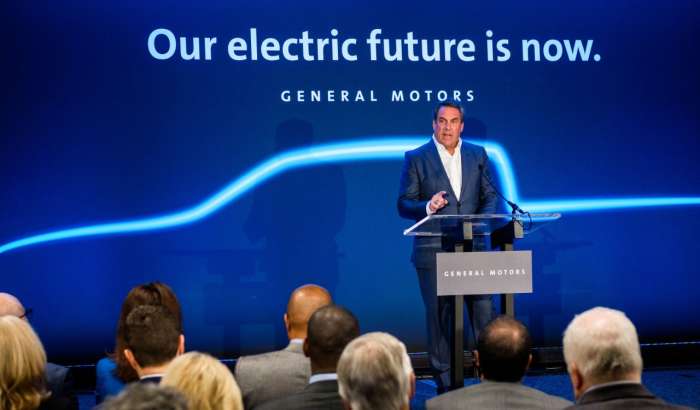 All of the media who cover the electric vehicle genre reacted pretty much the same way; They called out the President for his “mistake.” But was it a mistake? The President has specifically thanked the UAW for putting him in the white house during prior EV-related events in which he spoke. Talk is cheap though. The real thank you will be the coming taxpayer subsidies for electric vehicles built by union workers in American plants.

Here is a quick selection of some of the media outlets that pointed out the obvious when the President “forgot” to mention Telsa:

Driven: Biden credits GM and ignores Tesla on electrification of cars, and Musk is not happy

General Motors promised years ago a lot of battery-electric vehicles would be coming soon, but isn’t quite ready to put one in your driveway today. Unfortunately, GM had to stop selling the Bolt and Bolt EUV (which we love, for the record) because they were burning up in a driveway here and there. Although GM has some great super-expensive EV trucks and EV SUVs "on the way," and a luxury EV wagon sort of car coming at some point, GM’s BEV line you can buy and drive home today consists of zilch.

Related Story: Which $20K EV Would You Choose? MINI SE or Mazda MX-30?

Why pick on GM? Subaru doesn’t have a battery-electric vehicle. Nor does American-as-apple-pie Lincoln Motor company, established by the Pilgrims in 1640. Dodge doesn’t have any EVs. Nor does Ram. Honda seems to have killed off its only EV, the Clarity. Toyota sells EVs, but they are HFCEVs (don’t ask). Heck, a long list of companies don’t sell any battery-electric vehicles in America today. GM’s just one of that bunch.

Who does sell EVs? Well, Tesla is the most American name on the list by any measure. Followed by Ford, except they make their EVs in Mexico. Nissan sells EVs, Hyundai sells EVs, MINI sells EVs, Kia sells EVs, Ford sells EVs. Heck, even Jeep has a plug-in.

The funniest thing about Mazda’s EV is how it was received by the media. They could not wait to diss its range, performance, price, content, and anything else they could think of. Yet, Mazda sells those EVs right now in America. And GM, along with many other big automotive brands, don’t sell any.

Note: We reached out to General Motors (Chevrolet) directly to verify the facts in this story and did receive confirmation that no Bolts or Bolt EUVs were sold in November. The vehicle remains under a stop-sale.

Thom wrote on December 4, 2021 - 10:40am Permalink
Please provide references to where you found information for the statement made above that the Pilgrims established a motor company in the year 1640.
John Goreham wrote on December 5, 2021 - 3:16pm Permalink
If my memory serves me, in "Of Plimouth Plantation" the second governor of the colony, William Bradford, concludes his account of the early settlement by writing, "With the intent of better ordering, preservation of ye paint finishes, we shall establish a car dealership to add $3,000 ceramic coatings, and with the idea of & furtherance of ye engine operation $125 oil change services..." Maybe I'm mistaking the account...
Steve wrote on December 7, 2021 - 3:00am Permalink
If you take this as any more than a “tongue in cheek”, you may enjoy reading some American history, maybe history of the automobile? The classic cars used during the war of independence are truly amazing.
Haha wrote on December 8, 2021 - 11:56am Permalink
Haha it needs no further comment or findings of such it’s obvious… look at those cars. Haha!
geemy wrote on December 7, 2021 - 7:48am Permalink
forget Tesla who is the only manufacturer to produce and sell EVs in large numbers
John Goreham wrote on December 9, 2021 - 8:38pm Permalink
Thanks for commenting Geemy. We pour accolades on Tesla in the story as you know from having read it. In American English, when someone starts a chat with "Forget that (well-established leader), the (lesser known) player did better than..." what they mean is that a much-discussed entity with high expectations for excellence was surpassed by a competitor nobody expected. Make sense?
BEN M SCHORR wrote on December 7, 2021 - 10:56am Permalink
I may be missing something but isn't the Chevy Bolt a GM-made EV?
BEN M SCHORR wrote on December 7, 2021 - 10:58am Permalink
Oh, never mind, I missed the "in November" part.
DengFrosch wrote on December 7, 2021 - 12:38pm Permalink
The headline is misleading. GM chose to recall their EVs due to flaws in batteries provided by LG. Let's not forget GM invented electric cars and produced one a decade before anyone else. Other EV manufacturers license GM patents to produce their EVs.
John Goreham wrote on December 7, 2021 - 3:22pm Permalink
Do you mean the EV-1? That came out within months of the RAV4 EV? You are right though. The headline is misleading. Mazda has been outselling (out delivering if you prefer) GM in BEVs for a few months now, and GM says that will continue into 2022. The current timeline for GM to have an EV for sale again is February according to the company.
Guillermo Ramon wrote on December 9, 2021 - 8:45am Permalink
When I went to buy my Chevy Volt in 2017, the salesman told me the volts were in the back of the parking lot and it would take at least half an hour to bring one. I insisted I wanted a red volt. While I waited, the salespeople tried to persuade me to buy an Impala or a Camaro. The full impression I got was that the dealership, or perhaps GM had an anti electric attitude. Had they promoted the Volts, they would have been selling like crazy. It is an excellent car. It is very economic to maintain, reliable, comfortable, and it has acceleration! I assume GM has opposing internal factions regarding EVs. The engineers must be pro EV and the marketing people are against.
John Goreham wrote on December 9, 2021 - 8:49pm Permalink
Well said, Guillermo Ramon. The Volt has legions of loyal fans and a very active group of fan clubs. It did sell like crazy by any EV sales yardstick. The Volt was the top-selling EV of its time even without much formal advertising. The Model 3 has since surpassed it of course. In America, we can count on one hand (two fingers actually) the number of EVs that have been able to sustain a sales rate of 3,000 units per month throughout their lifecycles. Models like the Accord, Camry, RAV4, Rogue, CR-V, Corolla, and Civic have maintained a sales rate of 10X that month after month for decades.
Guillermo Ramon wrote on December 9, 2021 - 11:16pm Permalink
Thank you John. What I like the best is that even when you drive on gas, it is moved by the electric motor, giving the same steady powerful performance that only electric motors give. And the combination of electric and gas power gives you total confidence to power up on long trips.
David Farlow wrote on December 9, 2021 - 11:19am Permalink
I thought Studebaker, Detroit, and Baker Electric of Cleveland led the EV revolution. Really though, GM's EV1 paved the way at the thought of practical fun electric cars...
Joseph Dante wrote on December 9, 2021 - 1:45pm Permalink
From the Detroit Free press: The automaker plans to sell just 560 in calendar 2022, exclusively in California. That would make the MX-30 slightly more common than the California condor, of which the U.S. Fish & Wildlife Service estimates 504 exist. The EV’s range of just 100 miles on fully charged batteries, however, makes the MX-30 a likelier candidate for extinction than the majestic carrion eaters.
John Goreham wrote on December 9, 2021 - 3:41pm Permalink
Thanks, Joseph. Hard to believe that the Mazda MX-30 will be in its second calendar year of deliveries before the Hummer EV, Ford F-150 Lightning, Tesla Roadster 2.0, Tesla Cybertruck, Cadillac LYRIQ, and Rivian R1S enter their first, but it seems like it will come to pass. We're sure the imaginary EVs we all hear so much about will all take flight and soar to great heights. Someday.