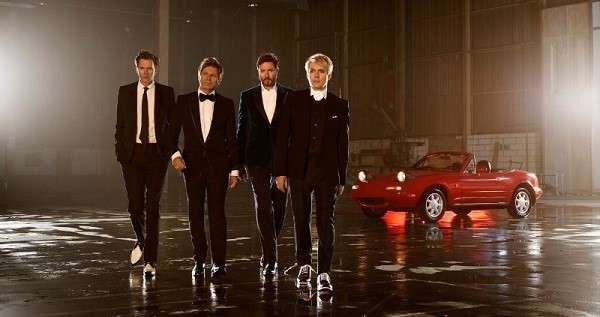 Please see our updated story with images and video on the new Miata by clicking here.

On Wednesday September 3rd at 6pm Mazda will simultaneously reveal the new, 4rth generation MX-5 Miata around the globe. Duran Duran will perform at the car’s unveiling in Monterey, California. At the same time, the car will also be revealed in Barcelona, Spain, and Tokyo, Japan. The entire circus will be viewable on Mazda’s Youtube channel.

Miata Lineage
The original Miata debuted 25 years ago. It changed motoring forever. No longer did one have to suffer poor quality and poor reliability to enjoy drop-top touring. The cars turned out to be great on-track as well, and club racing of the Miata took off.

The second generation combined great looks with all the best attributes of the first generation. There were even limited numbers of MazdaSpeed Miatas with turbocharged engines. The racing scene continued to grow and Miatas slowly became one of the most popular cars on-track around the world.
The new generation Mazda MX-5 Miata has been incubating since the 2006.5 third generation was launched. Shortly into the car’s run a power retractable drop top was introduced. That vehicle was slow to win the hearts of the Miata faithful who view the 1st generation car as the original, and the second generation as the best-looking. Over time, however, the 2006.5 through 2015 model year cars have come to be widely respected. Lest there be any doubt which car was the quickest, the 3rd-generation cars have to carry weight ballast to even the field when racing against the prior two generations.

Mazda’s 4rth Generation MX-5 Miata
Nobody really knows yet what the look will be of this new 2016 Mazda MX-5 Miata. Nor do we know its drivetrain specifications. However, most experts predict the car will have a similar power to weight ratio as the last generation, and be more fuel efficient. Those who wish the car to be more of a true sports car with more speed and capabilities may find it in the Fiat (or perhaps Alfa Romeo) version that is being co-developed with Mazda’s.

My calendar is marked, and I will be watching the global 4rth-Gen Miata reveal September 3rd. If you miss it, simply check back with us. We plan to have full coverage as soon as the evening of the 3rd.

Author’s note – My guess is Duran Duran was chosen to use the dramatic introduction of Rio. The Mazda press release was titled “Hungry Like The Wolf.” Anyone care to make a guess what they will play as the curtain is drawn back?