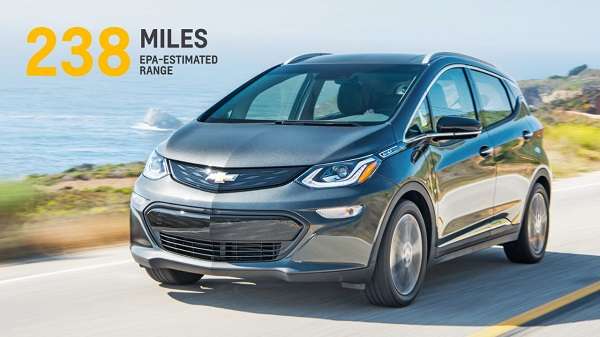 The Chevy Bolt is now being built for sale in the U.S. GM walks the walk.
Advertisement

The concept that an affordable battery electric car can succeed in the marketplace is an untested theory. Despite EVangelists’s claims that all consumers “need” is about 40 miles of range, no affordable battery electric vehicle has broken into the mainstream if sales are any measure. Most of the top-selling affordable electric vehicles are not battery-electric, but plug-in hybrids or range-extended EVs with gasoline generators. Both GM and Tesla are planning to test the market with a new EV offering with a battery range about half that of a typical gasoline car. Chevy's Bolt will be the first to market by a year, perhaps two.
- 2017 Chevy Bolt vs. Tesla Model 3 Detailed Comparison

Reuters* reports that, as you read this, about one in every four or five of the vehicles rolling off the line GM’s Orion plant are Bolts. The plant can produce 90,000 vehicles per year and is also making Sonics. This is GM’s first strength. The company knows how to produce cars in volume based on nearly a century of doing so. Tesla never has. GM can adapt its lines to build multiple similar vehicles and shift production to meet demand. Tesla’s Model3 will be built on its own line with no other vehicle sharing its platform. Much later a second derivative of the Model3 may also be made on that line, perhaps a compact crossover, but that could be five or more years away.
-

General Motors also has another advantage over Tesla. It has a huge captive audience to which it can sell, or trade, or lease, or lend, or even give cars to. GM’s Lyft ridesharing network partner may be the perfect way for GM to boost sales volume, particularly early on. This network is in place now and operating. Any Telsa-related ridesharing network of any significance is years away. Tesla could certainly sell or lease cars to any ridesharing network it could find as customers, but GM already bought into this market.

A third advantage GM has to get the affordable battery-electric vehicle to succeed is fleet sales. GM has as much or more fleet selling experience as Ford, and these two dominate the marketplace with FCA US a third player. If the Bolt can succeed in the way that all EV advocates hope a battery-electric can, the Bolt could be a popular fleet vehicle. For example, Solar City now uses gasoline-powered subcompact Ford and Chevy vehicles in its business. Other solar installers, now in direct competition with Tesla will consider the Model3 a competitor. Truthfully, this is just an easy to illustrate example. Municipalities, utilities, delivery companies, and any company with a network of small vehicles looking to cast a green shadow can, and will, be targeted by GM as possible customers for its Bolt. (More on page 2)

Tesla has many advantages as well. This is certainly not a definitive market penetration analysis. We'll save that for the day that Tesla actually builds a production Model3. Now that Chevy has begun production, GM has one, possibly as many as three years to get ahead of Tesla in a limited market. One possibility very few stories comparing the Tesla Model3 to the Chevy Bolt consider is that both could succeed. Or both could fail to sell in what are considered mainstream volume, as every prior affordable battery-electric vehicle has.

David Lapham wrote on November 7, 2016 - 12:45pm Permalink
Too bad the Bolt is ugly.. It is in the same look class as a Sonic, maybe worse, but costs in the upper $30k. The only reason one would buy it, is because it is electric, and has a decent range. That is it.. The Model 3 on the other hand has looks and performance to match it's price. It is a cool, nice car, alons, then it is also electric, with a decent range. Why is this obvious point so often ignored?
John Goreham wrote on November 7, 2016 - 2:16pm Permalink
Excellent question David. And not just in the context of the Tesla Model3, which to my eye is a great-looking car, except for the front fascia. When I do a review, or a story covering a vehicle or a class of cars, I have learned not to lean too heavily on the concept of "Good looking." At least until the Tesla autopilot is approved for driver-less operation all of the people that read my stories and drive cars have their own, fully functioning eyes. They can see how a car looks and they can make their own value judgement on how they feel about the look of a car. Owners of cars with styling that has proven polarizing, say the Lexus RC F, love the way it looks. If a reviewer feels otherwise, what does that matter to the RC Fan? Back the story above, I do point ourt that the Tesla Model3 may have its own set of advantages. We just don't know yet. A production Model3 has never been shown to the press. Once Tesla releases the car for testing, and it has its EPA certification, we may find it has many advantages, or not. Time will tell.
Lawrence wrote on November 7, 2016 - 2:17pm Permalink
I have a very early reservation for a Model 3. I would be extremely surprised if the price for a decently equipped model is under $45k. Tesla producing a far better car at the same price and profitably is not going to happen. It's a business and they're Apple not Dell. It's going to be a great car but deliveries for the $37k stripper model is likely going to be a token few at the beginning and the rest will wait years until they've moved plenty of the well equipped ones.
Charlotte Omoto wrote on November 7, 2016 - 4:43pm Permalink
"...no affordable battery electric vehicle has broken into the mainstream if sales are any measure." But have you considered the barriers to evs breaking into the mainstream? What about them only being available in certain states, not available in many dealers or dealers that have them not pushing it, or worse, dealers steering customers away from evs?
ross wrote on November 7, 2016 - 6:57pm Permalink
I think the Bolt could have been a really successful car. I'm extremely disappointed to hear that gm is not taking it seriously. only building 30,000 in the first year? only sending them to ev-mandate states? feels like a betrayal. they said it would be available nationally then renegged. you can bet your bottom dollar there won't be a penny spent on advertising the Bolt. the specs are good. the initial reviews are good. you won't be able to buy one though because it's a damned compliance car. I should never have got my hopes up about a car from the company that literally crushed EVs out of spite.