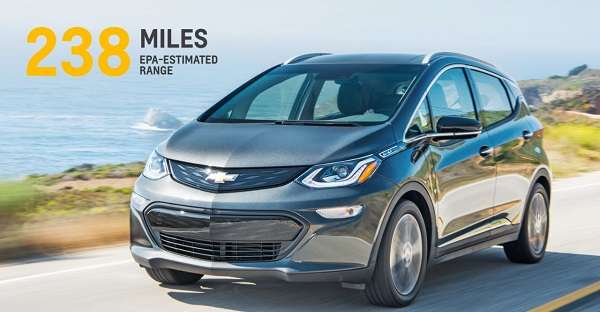 The Chevy Bolt has just been given an EPA-estimated range of 238 miles per charge, which is good news for the automaker which promised to be the first to offer an affordable electric with more than 200 miles of range. GM North America President Alan Batey says “The Bolt EV is a game changer for the electric car segment.”
Advertisement

The big question is “Will it be enough to beat the Tesla?” The Tesla Model 3 has been shrouded in secrecy since the company took thousands of dollars in deposits from buyers who are anxious to drive a more affordable electric. The Model 3 is supposed to go on sale late next year as a 2018. When it was advertised, the Model 3 was projected to get 215 miles per charge and sell for $35,000.

Tesla already has a vehicle that gets more than 200 miles per charge. The Model S can get 215 miles between charges, but it starts at a whopping $66,000. Other models are rated to go further but they are way more expensive, closer to four times the cost of the Bolt. No word on if the Nissan Leaf pure electric is planning a version in the 200 mile range, the current model is rated around 74 miles between charges.

Perhaps the biggest advantage that Bolt has against the Tesla is timing. Chevy is promising that deliveries will start later this year while Tesla Model 3 isn’t expected for at least another year, at best. Tesla is renowned for running late. While Tesla has promised to speed up production, it has been plagued with delays in the past. Tesla promises a more luxurious design, but how long are buyers willing to wait? Thousands have already made deposits, but surely they can get refunds if manufacturing dates aren’t met. It is more likely that people who made Tesla down payments will be upsold to a different Tesla model, that may be more available.

While on paper, the Chevy Bolt wins the battle, Tesla has a certain aura for fans.

Chevy has promised that the Bolt will be a vehicle for the masses, Tesla buyers may be determined to wait for their more stylish, elite car.

JC wrote on September 16, 2016 - 7:15am Permalink
Yes the bolt wins just about IF you are not ashamed to be driving a car like that and IF you don't drive too fast because with those aerodynamics, highway range will be severely impacted
Mary Conway wrote on September 16, 2016 - 9:04am Permalink
True on both counts. That's why I mentioned the aura of Tesla. Some drivers wills never be happy in a Chevy. That's the way the world works. Thanks for commenting, I appreciate it!