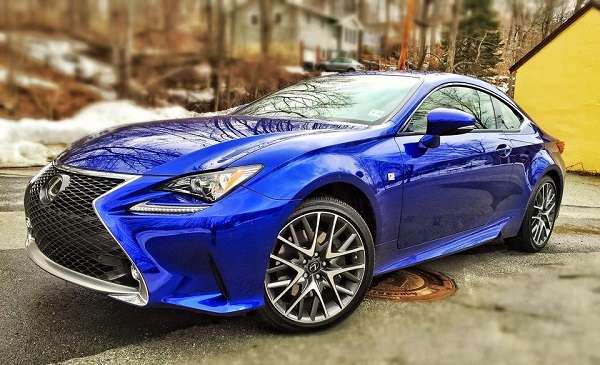 Just two years ago the Lexus IS 350 F Sport sedan beat its BMW and Cadillac competitors in a Car and Driver comparison test. Will the RC 350 F Sport fail to measure up?
Advertisement

Almost exactly two years ago the Lexus IS 350 F-Sport won a Car and Driver comparison test against the BMW 335i and the Cadillac ATS 3.6. In this sedan matchup, the Lexus had many strong points and made history by breaking the automotive publication habit of awarding the win to the BMW and then testing the cars to see who came in second. In the April 2015 print edition of Car and Driver, the Lexus RC 350 F Sport is basically called a relaxed cruiser and compared unfavorably to the BMW 435i and Cadillac 3.6 coupe.

Although not a formal comparison test done the same day in the same conditions, the CD writer compares the 2015 Lexus RC 350 F Sport to the Caddy and BMW throughout the short review. One line may sum up the whole article, that being, “However, those seeking a thrill from behind the F Sport’s wheel will be underwhelmed.” Pointing out the specifications of the Lexus RC 350 F Sport, the author notes that the Lexus is 0.3 seconds slower to 60 MPH than the Caddy and 0.5 seconds behind the BMW. You can tell the difference between a 5.7 seconds and 5.4 sprint to 60 MPH when you drive a street car, right?

CD also points out that the RC 350 F Sport has a “somnambulant” highway ride, like its ES 350 brother. That means it feels like the car sleep-walks in case you don’t use the term in your daily conversations. Putting a positive end to a story that found mostly faults in the new RC, Car and Driver says the RC does have “…that most precious of commodities – tactile feedback.” The tester also noted the car has “…good body control and smooth, balanced transitions, even when driven hard.”

Interestingly, the car magazines also had little good to say about the IS 350 F Sport when it first launched in late 2012 and was tested solo. However, on the day that the competitors were all brought together for actual back-to-back comparisons, the Lexus came first in both Road and Track, and Car and Driver full comparison tests. It will be interesting to see how the Lexus RC 350 does when the comparisons are done this year with the Cadillac ATS and BMW 435i.

Tesla Contemplates A New Strategy for China Retail even As Sales Boom
Jay Leno on Elon Musk & EVs: “I Think He Should Get ... Credit"
END_OF_DOCUMENT_TOKEN_TO_BE_REPLACED