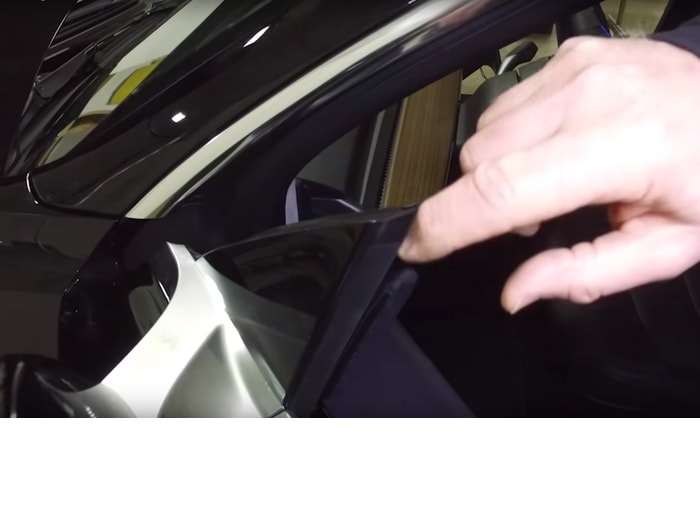 Watch as an industry expert picks apart the Tesla Model 3 on Safety and quality. What he reveals is surprising.
Advertisement

Autoline's John McElroy recently hosted a walkaround of the Tesla Model 3. The industry expert, Sandy Munro, of Munro & Associates, began his overview by saying, "This thing is a miserable job." That about summed up this expert’s opinion of the Model 3’s safety and quality. Munro is not the only person to have raised these issues. Others have come to a similar conclusion when given a chance to test the Model 3.

Tesla Model 3 Safety
That comment precedes Munro’s explanation of just how difficult it is for first responders to make the Tesla Model 3 safe in the event of an accident. The Model 3 requires a multi-step process that involves using a 12-Volt battery and jumper cables just to open the frunk, or front trunk, in order to then gain access to the power cable which must be cut twice.

First responders must know how to render the power systems in electric vehicles safe for workers trying to extract a passenger in the event of a crash. (and yes, >Tesla Model 3s are already crashing). Munroe explains that this is unheard of in modern automobiles, saying, “We’ve never seen anything like this. Usually, there is some sort of a mechanical thing that allows fire department to get in easily.” Munro went on saying that in an accident, “You only have seconds. This is slow.” The secondary backup power disrupt area was very confusing and requires the use of a power saw to cut through the body. But the location to make the cut is not shown in the emergency instructions.

Getting out of the Tesla Model 3 in an emergency may also be a problem. Up front, Tesla has a mechanical door opening latch in case the power to the electronic door opening system is not working. However, in the back two doors, there is no mechanical backup. Rather, out through the trunk seems to be the alternate plan. Munro’s final safety comment is “I’m certain lawyers are going to have a field day with this stuff.”

Tesla Model 3 Quality
With regard to the Model 3’s quality, Munro and McElroy found that the two front doors of the Model 3 sounded like there was something loose or rattling inside. They also discovered that the window trim had apparently been repaired by Tesla post-manufacturing. It was not the same on the two sides of the car. Munro said of the fit of the door panels of the Model 3, “The gaps on this car are like you can see them from Mars.” With regard to the heavy closures of the hatch and doors, Munro says, “Not since the nineties have I seen closures like this.” In back, looking at the panel gaps of the truck and fenders, Munro said “The tolerance stack-ups on this car are like nothing we’ve ever seen before. Not since.. the 70s.” He went on to add, “These are flaws we would see on a Kia in the 1990s.”

The quality issues Munro highlights are similar to those pointed out by Tesla owner and financial analyst, Toni Sacconaghi, who summed up his Model 3 test by saying, "Our inspection revealed widespread shortcomings in fit and finish."

Tesla Model 3 Quick Facts
The Tesla Model 3 went on sale in July of 2017 starting at $45,000 and rising to nearly $60K fully-equipped. Tesla has plans to introduce a less expensive version at some point later. Tesla has hundreds of thousands of reservation holders, but to date, has only delivered about 4,000 cars to owners. Production SNAFUs have pushed the Model 3's delivery schedule out by about seven months. In January, the Model 3 edged out the Toyota Prius Prime by about 400 cars to be the number-one-selling EV in America.

Jerry wrote on February 6, 2018 - 6:55am Permalink
I would like to know if this guy is hired by competitors to find out how the parts of a car work. Of course, he’s biased. He’s going to lose his job soon!
John Goreham wrote on February 6, 2018 - 9:42am Permalink
Is the Tesla owner we mention and quote in the story also biased against Tesla? If so, why? There is a link to his full story if interested.
Stephen wrote on February 6, 2018 - 6:56am Permalink
Tesla fans are so defensive, I understand there are motives for competitors to spread bad publicity, But are they always wrong? I am a Tesla fan but have worries about build quality.
Joseph wrote on February 6, 2018 - 6:57am Permalink
He is right in his own part. But that does not mean, it would stop me from buying Tesla, as even though there are cons, there are also many pros. Tesla is ultimate EV of today. And nothing will change it very soon.
Roger Pressman wrote on February 6, 2018 - 4:51pm Permalink
According to this review, everyone is going to die or fry because the trunk hatch has an opening mechanism that's different from 20th century cars. Oh wait, maybe the Model 3 stratospheric safety rating might just protect passengers and the danger of fire in a Model 3 is reduced substantially because there's no gasoline tank (a potential bomb) sitting at the rear of the car. And the door handles!! His poor delicate wrists are going to break at he tries to open them. Oh wait, maybe that's because Tesla cares about aerodynamics and reducing drag and has designed the handles accordingly. And the trunk!!! His weak shoulders will become dislocated. Oh wait, maybe that's because Tesla worked hard to provide a large trunk opening and 6 feet of front to back storage capacity. If this reviewer thinks Tesla Model 3 is a car from the 90s, he's even more clueless than his fawning interviewer. The review is garbage and an outright smear. One has to wonder who paid for it and why they're so frightened of Model 3.
John Goreham wrote on February 6, 2018 - 5:10pm Permalink
Good breakdown Roger. No Tesla has ever earned the highest safety rating in America, the IISH Top Safety Pick Plus. Perhaps the Model 3 will be the first. Keep in mind this is not a review. It is an analysis by a benchmarking company and focuses on the things the group found of top concern. Like the Model S, Tesla is keeping the Model 3 away from the press as much as possible. The few full reviews we have found were done by groups that purchased a Model 3. What's Tesla so afraid of is the real question. Every other automaker provides the press with vehicles to test and review prior to launch. Here is a great review of the Model 3 done by Edmunds: https://www.youtube.com/watch?v=FESJlsKeYGo

LG's New EV Battery Plant Is a Welcome News for Tesla
Tesla Giga Berlin's New Hurdle: It's Not Only the Gov't, but Now Tesla Itself
END_OF_DOCUMENT_TOKEN_TO_BE_REPLACED