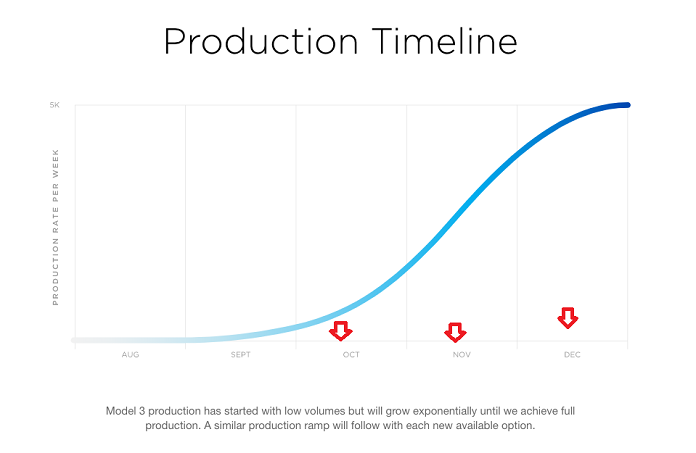 The Tesla Model 3 launch has been a complete failure. Here is where Tesla is versus where Elon Musk promised customers, fans, and investors Tesla's Model 3 deliveries would be today.
Advertisement

The Tesla Model 3 launch will go down as one of the worst managed, and most over-hyped new vehicle launches in history. The model 3 may well prove to be a milestone car for Tesla and electric vehicle advocates, but the launch's failure is no longer an open question.

Musk told the world in July, the month the Model 3 was first delivered:

Well, it's December now and the launch has not grown exponentially. Our delivery facts for the first few months come from SEC filings and this month's numbers are according to Inside EVs, an EV-advocacy publication that wriggles out the Tesla sales delivery facts using registration data and owner-reported VIN numbers.

We used the lowest commonly thought of exponent, a square of the value, to provide the missed estimates. As we frequently have to remind readers, Tesla hides its monthly sales figures. It is the only automaker that does so. Only when forced by the SEC to reveal production figures on a quarterly basis does Tesla then give the facts that every other publically held automaker provides. Inside EVs does a great job figuring out Tesla's deliveries, and they correct their estimates quarterly for Tesla. They are usually accurate to within about 90% of the estimates they publish.

Tesla Strengths and Weaknesses
Tesla has a major strength and a major problem. It can envision, design, and produce a fantastic prototype, or a small volume of hand-built and hand-corrected luxury vehicles. The company can also produce slick and persuasive tweets, Youtube videos, and stage shows. However, Tesla has never proven it can produce automobiles in even the lowest of mainstream volumes. Without exception, automakers who launch a mainstream vehicle, and the Model 3 was promised to be mainstream, have the production bugs worked out prior to the launch. Tesla is fixing issues as it goes and the process is now into its sixth calendar month. Reuters reports that the results of this slapdash manufacturing is a huge rate of cars that cannot pass quality control at the end of the production line.

Tesla's Broken Promises
Tesla had promised to be delivering 5,000 cars per week by this point in time. Since July, the company has managed to deliver only 712. The graph with the blue curve above was posted on Tesla's public website as recently as last week. We have inserted the red arrows to show the actual results.