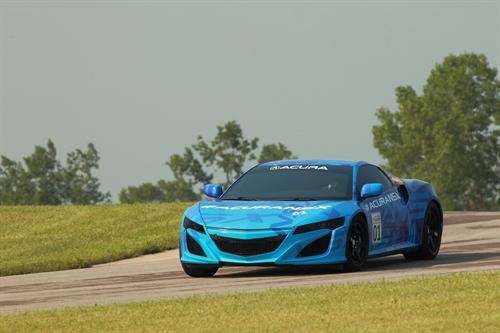 Acura's new supercar was on display by Acura today ahead of a Honda race series event. One more reminder to the world that the car is real, and will be here very soon.
Advertisement

Acura today released a sneak peek photo of the new NSX supercar lapping the Mid-Ohio Sports Car Course in Lexington, OH. This was no spy shot. The NSX was run just prior to a Honda IndyCar 200 Series race. This is obviously Honda/Acura letting the world know that the NSX is really coming and not just a Jerry Seinfeld advertisement.

Ohio is the adopted home of the NSX. Engineers with Honda R&D in Raymond, OH are leading the development of the NSX, which when ready, will be built in Marysville, OH. Supercars like the NSX are built by mainstream manufacturers as halo cars. They give the brand a certain image. This new supercar will help Honda remind its fans and customers of two things. First, Honda builds hybrids and other types of green cars. Second, that pretty much every Honda for sale in the US is built right here. In fact, Honda exports Accords from the US.

Of course the NSX is a hybrid supercar. All the automakers now use some form of hybrid drive in their low-volume, high cost cars. For example, the new Porsche 918 is a hybrid capable of driving its owner through a city without any tailpipe emissions on its own internal electric power and then lighting up the countryside about as good as any other supercar. The new NSX will feature three electric motors. Most likely because other vehicles have used two in the past.

The new Acura NSX will also be all-wheel drive. Its V6 and electric motors would easily overwhelm a rear wheel design. Acura calls its drive system Super Handling All Wheel Drive, and uses the letters SH-AWD to identify it on cars that use it. Rumors that Acura initially consider calling the system “Really well handling all-wheel drive” are totally unfounded.

Acura watchers expect that the new NSX will debut in its completed form this winter at one of the auto shows. Given its mission to remind everyone that the car, and most Hondas and Acuras are made in the USA, we would place our bet that it will be at the Detroit show.

Video courtesy of Youtube.com and WKEFandWRGT
Photo by Acura