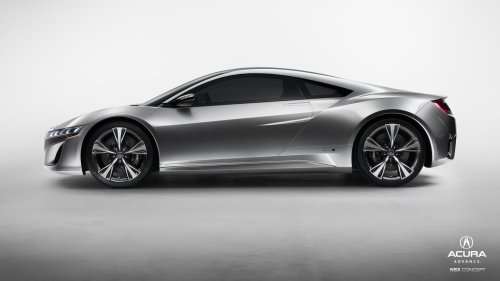 More details on Acura NSX as 2013 model, will be Made in America

The 2013 Acura NSX, which hit detroit like an automotive atom bomb to steal the show, is going to production, Honda says. What's more, it will be built in Ohio - the all-wheel drive supercar will be Made in America, starting this year. Plus a new video explains a few more details on this awesome concept's drive train.
Advertisement

Honda's Acura hit a square bullseye when they unveiled the Acura NSX Concept at the North American International Auto Show this year. The car made headlines and was one of the most talked about concepts unveiled in Detroit for the 2012 show. Now, Honda has committed to building the car and has given more details about how that will happen.

The Acura NSX will be a 2013 model and will hit showrooms late this year or early next. What's more, it will be built here in the U.S.A. at Honda's facilities in Ohio. Conceptual design and engineering work has been handed over to the company's Center of Research and Development in Raymond, Ohio where it will finish its engineering and production development. Many industry prognosticators are guessing that this means a production-ready version of the NSX may be seen at another auto show this year.

The 2013 Acura NSX will feature all-wheel drive with Acura perhaps learning a lesson from rival Audi, who's perfected the idea. Like its namesake predecessors, the 2013 Acura NSX will feature a mid-mounted V6 engine, but unlike them, it will have a 7-speed transmission integrated with electric motors to drive the rear wheels and another pair of independent electric motors up front to power that axle. This gives the car a lot of advantages.

Its chief advantage will be power off the line, likely giving the NSX a lightning fast quarter mile speed. Its 0-60mph ratings will definitely be rubber-laying. Another advantage will be control. Having two independent motors on the front axle of a rear wheel car is something Audi has demonstrated in many of its supercar concepts before, such as the eTron. It means the motors can be independently controlled to give the car maximum handling and wheel grip in curves and on uneven pavement.

Finally, Acura has a new twist on this design: regenerative braking while turning. Since the inside wheel often runs slower than the outer wheels in a curve, that inner wheel with a motor mounted can be used to regenerate electricity as it slows to control the turn. That gives both an unprecedented amount of control in the turn, but also a definite increase in efficiency.

This is demonstrated in a new short promotional video from Acura:

So along with edge-cutting design, the NSX will have some industry-leading technology happening under the hood as well. This may become the most-anticipated new sports car we've seen for some time.