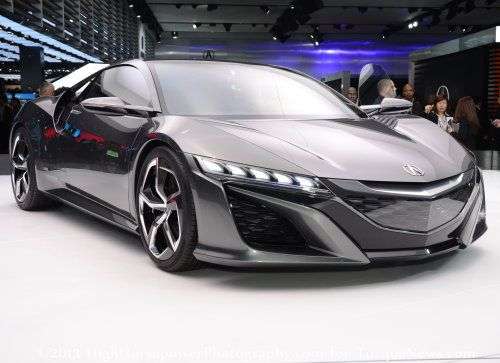 Official: Acura NSX Hybrid supercar to be Made in the USA

American Honda announced this morning that the sleek Acura NSX Hybrid supercar that was on display at this year’s Detroit Auto Show will go into production in 2015 and when it does – it will be built right here in the United States at a new facility in Ohio.
Advertisement

American Honda suggested that the Acura NSX would be built in Ohio when the Concept was first introduced at the 2012 North American International Auto Show in Detroit (and again in 2013) but at that time, it was believed that the NSX Hybrid supercar would be built at the same Marysville Auto Plant as the Honda Accord and the Acura TL. Instead, the upcoming Japanese supercar will be built at a new performance production facility that will require an investment of around $70 million dollars.

"Thirty years ago, building cars in America was a big dream. Working together, here in Ohio and across North America we turned this dream into reality," said Hidenobu Iwata, president & CEO of Honda of America and the head of Honda's manufacturing operations in North America. "The location of this facility is in the midst of one of the greatest collections of engineering and production talent in the world. So it makes sense that we will renew the dream and build this high-tech, supercar in Marysville, Ohio."

Honda has picked a site in Marysville Ohio where the company will create their new Performance Manufacturing Center that will begin mass producing the Acura NSX Hybrid supercar in 2015. This new production facility is adjacent to Honda of America Manufacturing’s Marysville Auto Plant where the current Honda Accord and Acura TL are built but more importantly, the Performance Manufacturing Center will sit only a few miles from the Honda R&D Americas headquarters where the new NSX has undergone the changes from concept car to a production reality. The new Honda Performance Manufacturing Center will cover around 184,000 square feet of the area formerly used for Honda’s North American Logistics with around 100 highly skilled workers being employed at the new facility to build the new Acura NSX. These supercar builders will be reassigned from other Honda facilities around Ohio so they will rely on local labor to build the new NSX – while also creating new job vacancies at the current facilities from which the NSX team is drawn.

"This new plant will be as unique as the vehicle we will build here," said D'Souza. "In creating the plan for this plant, we looked closely at each process and determined the perfect blend of associate craftsmanship and technology to adopt a new approach to manufacturing." When the Honda Performance Manufacturing Center begins producing the Acura NSX Hybrid supercar in 2015, the new NSX will be like nothing else in the American sports car market. This mid engine sports car will rely on a high performance V6 engine coupled to Acura’s new Sport Hybrid SH-AWD (Super Handling All Wheel Drive) system. This system has the V6 engine channeling its power to the rear wheels through a dual clutch transmission paired to a hybrid assist engine while the front wheels are powered by a pair of electric motors that can provide both acceleration force with torque vectoring and braking force for supreme handling capabilities. Acura promises that this drivetrain will offer high performance V8 power with the efficiency of a four cylinder engine so the new NSX will most likely be the most efficient sports car in America (not counting the likes of the all-electric Tesla lineup).

While American Honda has offered just enough information on the new Acura NSX Hybrid supercar to keep us all very interested – there are lots of questions about the new supercar. Most importantly, Honda has not announced the size of the engine being used or that output of this fuel friendly drivetrain so right now; we really don’t know how fast the new NSX will be. It is widely expected that the new NSX will target the likes of the Lamborghini Gallardo or the Ferrari 458 Italia which would require a power to weight ratio of around 6 pounds per horsepower. Should the new Acura supercar weigh around 3,000 pounds, it would need around 500 horsepower to keep up with those other “high volume” supercars…a number which seems very realistic from this high tech drivetrain. We can expect that the new Acura NSX Hybrid supercar will make its production debut at one of the American auto shows over the next year. That seems like a long wait for those who so desperately want to meet the next generation of Japanese supercars but with production at least 18 months away – it could be a year or so until the full details on the new NSX are revealed. However, we do know that when the new hybrid NSX arrives, it will be made in the USA.