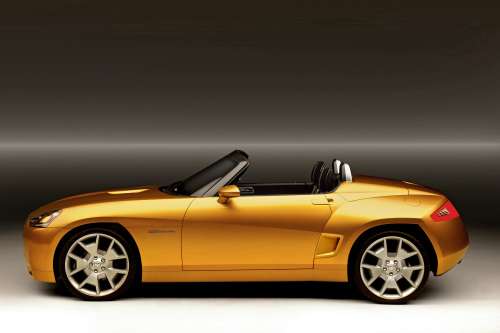 Here are three cars that Ford, GM, and Chrysler could create using existing technology that would shake up the market.
Advertisement

In this era of unprecedented automobile sales and renewed energy in the auto industry, now is the time for a bold new approach to American cars. Here are three that can be produced immediately.

Cadillac ATS-V Hard-Top Convertible Coupe
The new Cadillac ATS compact sports sedan has the design, the branding, and the backing to become a world class success story. Blatantly modeled after the BMW 3 Series, the new ATS hits the 3 Series in the heart of its production. Sadly, Cadillac saw fit to offer the ATS with a base engine unfit for any Cadillac.

Actually, that isn’t really true, we just wish it were the case. The Catera, the Cimarron, those were cars Cadillac produced worthy of the base ATS engine. Cadillac should kill that base engine and move forward with its new 2.0 liter turbo and 3.6 liter V6 it markets as a ‘premium” engine in the ATS. That the engine is the “base” engine in a lot of other GM products, like the Camaro should be ignored. The engine is solid. However, the ATS is lacking a major line-up offering that keeps it from having a halo effect over the whole ATS line. What GM needs is a hard-top, convertible, coupe version of the ATS to be called the ATS-V.

A halo car is the car in a line that owners think of to identify the line. For example, every CTS sedan driver likes to think that their sedan is related by blood to the awesome CTS-V coupe. The fact that they don’t have that model is not a problem. Their sedan fits their day to day needs better. BMW, Infiniti, Lexus, and Volvo all produce a hard-top convertible coupe in this class, and if Caddy wants to play in the big leagues it needs to step up.

Ford F-150 Ecoboost Plug-In Hybrid
Ford’s new Ecoboost line of engines has really found its most logical home in the F-150 pick-up truck family. In the past, powerful engines in pick-ups were always V8s. They worked great and with modern fuel injection, cylinder deactivation, overdrive transmissions, and other tricks they are not bad on fuel. However, a smaller, twin-turbo V6 will have inherent advantages in moving parts compared to an equal V8 and Ford has done a great job marketing the smaller turbocharged engines to the hardest customer base in the world to introduce change to. Now it is time to push the envelope and offer the Ecoboost V6 with a hybrid powertrain.

GM has recently dropped its hybrid powertrains due mostly to customers ignoring them altogether. However, Ford is really now the leader in fuel economy in the US with its hybridization of the Fusion and Focus. Ford should stun the world and offer a 25mpg combined pick-up with a plug-in hybrid drivetrain like that offed in the C-Max. Ford has everything it needs in terms of technology and supplier base. All that would be required is courage. Just as a footnote, the Ecoboost F-150 is currently rated at 18 MPG. That is such bad fuel economy it makes auto writer’s hands hurt to write about other Ford products and mention fuel savings. However, Ford’s 18mpg currently leads all pick-up trucks.

Chrysler SRT Demon
Chrysler already designed the Demon back in the early 2000s and showed the world a finished product in 2007. Chrysler was bouncing between German ownership, VC ownership in the US, and now Italian ownership and could not produce a small roadster. There was simply no spare money, hands, or customers around to make it a reality. Chrysler is on a tear right now. It has customers flooding its new dealerships (which are far fewer in number – a good thing) and it has the backing of Fiat, a company willing to take chances. With Fiat’s engines and Chrysler’s existing platforms from the Mercedes designed Crossfire (a thinly disguised SLK) it can produce an American built Demon and tell Mazda politely it would prefer to tangle than dance. Fiat is in the middle stages of partnering with Mazda to produce a vehicle based on the Miata. Why not just do what it already showed us it can, and build the Demon in America with a Fiat drivetrain?

Sometimes the hardest thing to do is take a risk when everything is going well. If these three “American” car companies want to lead they need to keep pushing the envelope and produce some cars that are not small, slow, overpriced electric toys.

Video courtesy of Youtube.com and carscom

Joe wrote on December 27, 2012 - 9:44pm Permalink
The Ecoboost Hybrid is interesting, however you do realize that the towing capacity will be lowered, and thus the usefulness of such a beast... Unless you want to invent Zeolite batteries or something lighter than air for the hybrid drive? LOL.
John Goreham wrote on December 28, 2012 - 12:12pm Permalink
Maybe. The towing of the current Ecoboost is pretty solid, and who are we kidding, a Toyota Tundra just towed the Space Shuttle. 99% of the F150s sold are pristine, unscratched, man-cars that tow a small boat twice a year to the lake house. Form me personally, if I got a truck I would want the 12mpg massive V8 with twice pipes and glass packs. But I'm funny that way... Thanks for the feedback and for reading TN.
Aaron Turpen wrote on December 28, 2012 - 1:23pm Permalink
The new Ram 1500 with the V6 and 8-speed trans gets about the same mileage (19mpg combined) as the F150 Ecoboost does with about the same towing and cargo capacities to boot. At about $1,200 less in MSRP. As GM has proven, there's really no market for a hybrid truck.
John Goreham wrote on December 28, 2012 - 2:30pm Permalink
That is a lot of forward gears!