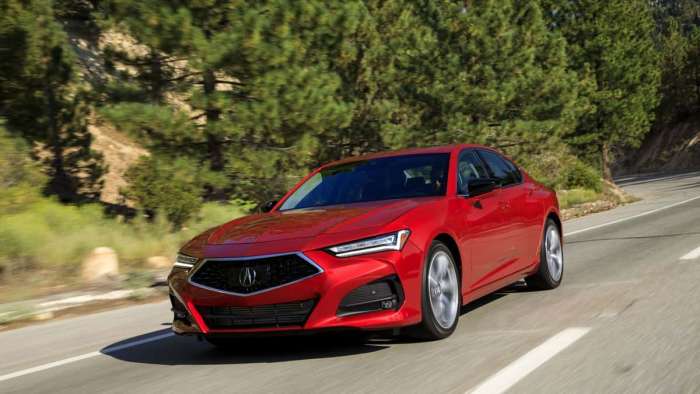 The list of improvements to the new 2021 TLX Advance SH-AWD is long and starts with the powertrain.
Advertisement

Acura has updated its TLX for 2021. The new generation brings changes to nearly every aspect of the car. Most notably, the 2021 TLX has a new 2.0-liter turbocharged engine as its base motor. An all-new three-liter turbocharged engine will arrive in the spring. Those shoppers who want a new TLX should rest assured that this new version is better than the outgoing car.

Related Story: Looking for a New 2020 Honda Accord With a V6 Engine? Here's Where To Find It

2021 Acura TLX – What Is It? How Much Does It Cost? Who Builds It?
The 2021 Acura TLX is a four-door sedan in the midsize premium car segment. The TLX rides upon a front-wheel drive platform, and all-wheel drive is optional. It is presently priced from about $40K to about $50K. The coming S-Type with the V6 will bump that range up to about $55K by our estimate. Our TLX Advance tester with SH-AWD had a price including destination of $49,825. The Acura TLX is built by Honda of America Manufacturing in Marysville, Ohio, with key components sourced in America. 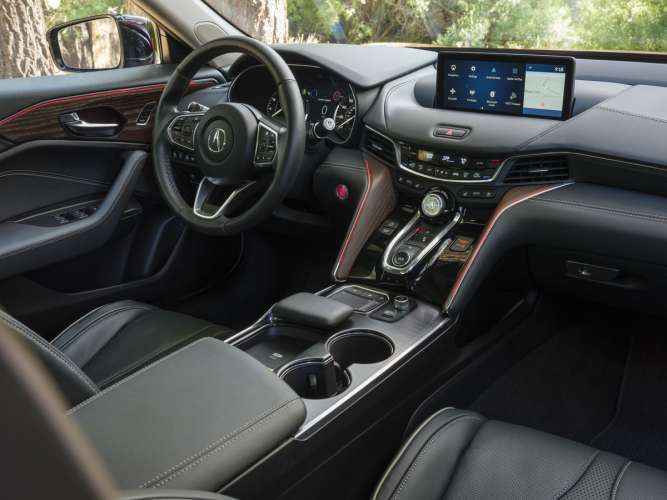 2021 Acura TLX – What Powers It?
The 2021 Acura TLX breaks from tradition by using a 2.0-liter, four-cylinder, turbocharged engine. This engine replaces the non-turbo V6 and base 2.4-liter four used in past generations of TLX cars. The good news is that fans who have owned past TLX cars are going to find this new engine more satisfying. The reason is not horsepower. With 272 hp, the TLX is down slightly from the past generation’s available V6. The reason this new engine is better from the driver’s standpoint is torque. Simply put, torque is what you feel when you accelerate from a stop or accelerate from one speed to a higher speed. It’s the push in the seat you get. And this car has more of that.

The TLX has 280 lb-ft of torque at just 1,600 RPM. That pull from a low rev point is why a good turbocharged engine can be so satisfying in normal driving. The new 2.0-liter engine is also higher in horsepower than the outgoing V6 until 5,000 RPMs. In almost all the driving you will ever do, this engine gives you more of what you want. And this isn’t just a theory; you can feel it when you drive the car.

The TLX is also getting a new higher-output engine later this model year. It’s a V6, but now with added turbocharging. Expect it to be class-competitive with the current offerings from Infiniti and Genesis. We’ll tell you how we like that engine when we have had a chance to drive it.

The SH-AWD system is back and is improved in a few ways. Acura has increased the torque-vectoring the system can provide, and it now comes more quickly. The TLX can now put up to 70% of its push to the rear wheels.

The transmission is a 10-speed auto. No manual is offered because nobody buys them anymore. There are three drive modes; Comfort, Normal, and Sport. Paddle shifters help make things more interesting if you need to hold a gear longer than the automatic transmission would. Paddles also help you to prepare for passing. The paddles can even help you to engine-brake the car heading into a corner. Remember that rear-wheel bias? 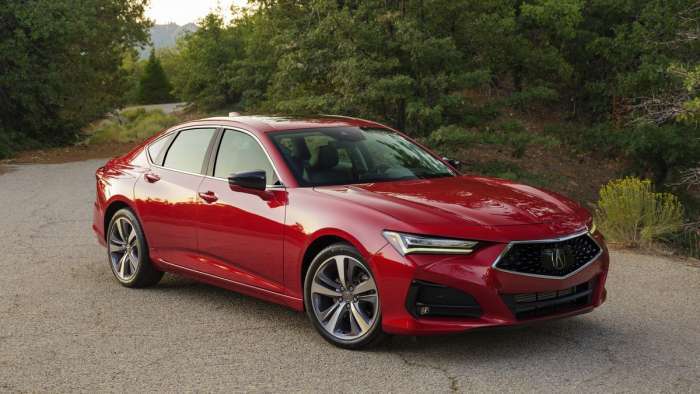 2021 Acura TLX Advance SH-AWD – The Drive
We found the new 2021 TLX Advance SH-AWD a very satisfying car to drive in all situations. Let’s start with the mundane. Around a suburban neighborhood, the TLX is serene. It has instant throttle response, so you are never pushing the car to give you ample power and then backing off. The torque is steady, and you won’t need to rev the engine much to get what you desire. The ten-speed auto never seems to hunt, and during our week in the car, we never found it in the “wrong” gear for the situation.

On the highway, the car is nearly silent and tracks perfectly straight. Use the lane-keeping assist to drive it for you, and relax. You need to keep your hands on the wheel, and the system reminded us of this more than we liked, despite our hands being on the wheel 100% of the time. The Acura system relies on feeling your steering inputs to know you are still in the game. We loved to look at the tach and see the Acura steadily cruising at just 1,600 RPMs at highway speeds. That is yet another benefit of a high-torque engine with a 10-speed.

When you find an on or off-ramp, the TLX Advance SH-AWD comes alive. You can pull a nice G load and feel confident the car won’t understeer. The TLX has 57% of its weight over the front tires. That’s a lower percentage than some front-wheel drive cars, and the result is a better balance. Twisty roads are a joy.

We don’t often mention braking in a sedan review, but the TLX’s brake pedal impressed us. It is not a race-car like brick, nor is it a mushy commuter car pedal. It’s just right. It feels like the folks at Acura made an extra effort to tune the brake feel to perfection for this car’s mission.

Our late fall roads are not yet full of potholes, but over the rough stretches, the TLX felt comfortable and never harsh. Many sports sedans we test let us down in this area. 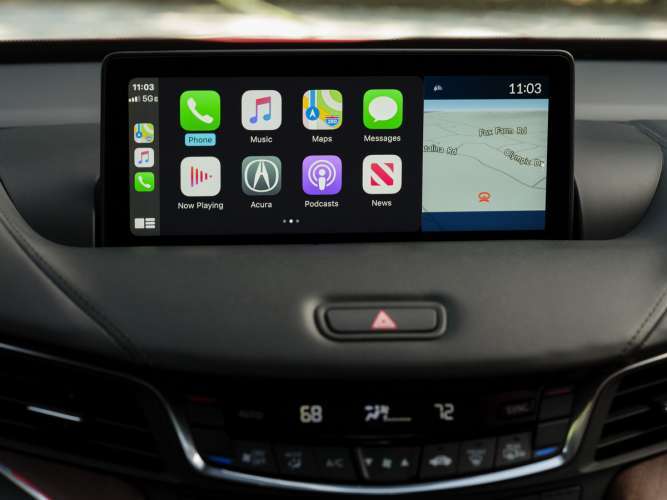 2021 Acura TLX Advance SH-AWD – Infotainment and Features
Acura has opted to use a remote touch interface to control the infotainment screen of the TLX. This is not our preference, but it is not an annoyance. To Acura’s credit, the system works intuitively, and unless you are doing something wrong, there isn’t much need to interact with the screen anyway. The steering wheel controls work very well for the most frequent tasks. Android Auto and Apple CarPlay via USB port and cord are available. We used Android Auto in our testing. The Google assistant worked perfectly with the voice controls in the car. Really the only time we used the remote interface was to aim at the buttons for Google Maps and Pandora so we could change the screen view. 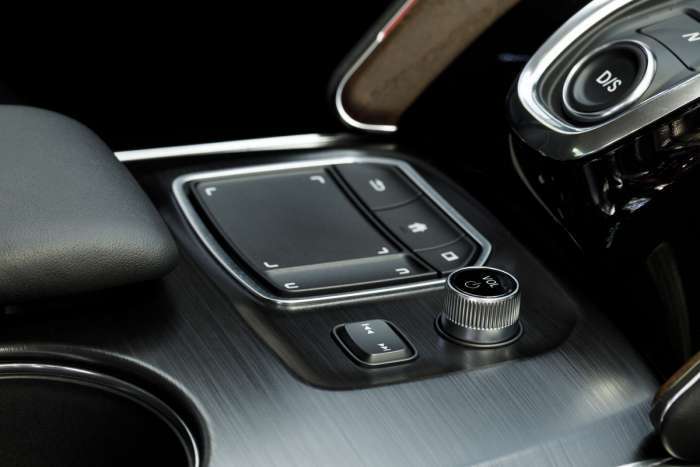 The TLX Advance trim offers an ELS Studio premium sound system that has to be heard to be believed. It is the equal of anything we have experienced in any Mercedes, BMW, or Lexus. The audio system has 17 speakers, four of which are in the ceiling. It is amazing, and audiophiles shopping for a $50K sports sedan should start with the TLX Advance.

Our TLX Advance SH-AWD test vehicle came with adjustable side bolsters to augment the usual seat adjustments. We found the seats to be superb. They are roomy and comfortable, but still stylish and sporty. The seats in a $50K sports sedan from a competitor we tested the week before felt like metal barstools by comparison.

What is missing from this winning recipe Acura has concocted? Only a spare tire as far as we can see. None of the TLX’s trims include one.

2021 Acura TLX Advance SH-AWD – Why Not An Accord?
Let’s set the record straight on the 2021 Accord vs. TLX debate. There is no equivalent Accord to the TLX Advance SH-AWD. The TLX’s top trim exceeds the top-trim Accord’s driving pleasure in innumerable ways. Check out our deep dive at the link above for more, but here are some facts; The two cars don’t share a single exterior dimension. The TLX has a longer wheelbase, but is shorter than the Accord and much wider (three inches). The TLX also has a closer to 50-50 weight distribution. We like the Accord. At the $40K price point, we might even choose it over the TLX. However, the top-trim TLX is in another league altogether. 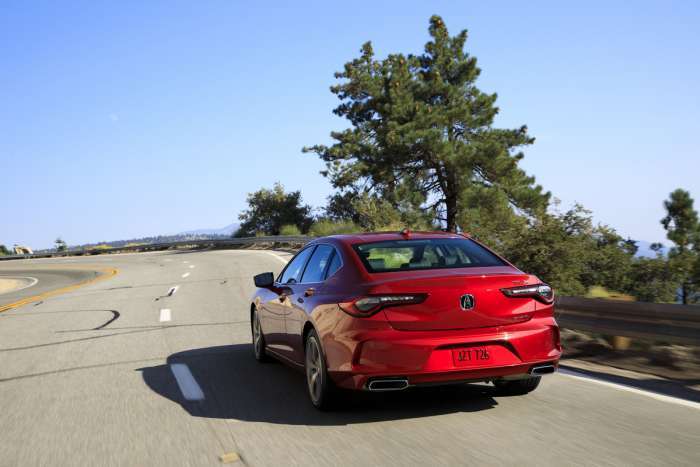 2021 Acura TLX Advance SH-AWD – Competitors
There are three main competitors we see for the TLX, and a shopper’s preferences will dictate which are the closest matches. First up, in a base FWD TLX at $40K, we would cross-shop the Mazda6 Signature. The Mazda offers more torque, more features, and a lower price point than the base TLX. At the cost of our $49,825 tester, we would have a look at the Genesis G70. The Genesis has a much longer warranty, three years of included maintenance, and concierge service included. Finally, we come to address the elephant in the room. Tesla’s Model 3 is almost precisely the same size inside as this TLX. At our tester’s $51K price point, the Model 3 offers an entirely different formula with its ultra-modern interior deisgn, and novel motor. Maybe you’ve heard about it? Kidding aside, the Model 3 offers better performance and a dramatically lower long-term ownership cost model than the TLX. Are they head to head competitors? You be the judge.

We have owned V6 Accords and a V6 Acura TLX in our family, and still do. If you know and love this formula and are considering a new car, be sure you try the better of the two ELS audio systems, and we strongly suggest the SH-AWD system. Keep an open mind as to the engine, and you will be signing the papers by the end of the test drive. This 2021 TLX is that good.

Phil wrote on December 1, 2020 - 12:34pm Permalink
Hi John, Just hoping you can correct an error in your review, which is very nice. But your MSRP is off about $1k. An AWD Advance is $48,300, Destination is $1,025, and premium paints are $500 for a max of $49,825.
John Goreham wrote on December 2, 2020 - 8:54am Permalink
Thank you Phil! I appreciate you catching this. I mistakenly added the destination fee twice. Acura includes this fee in its total, which we feel is very honest of the company. I have edited the story to reflect the correction.