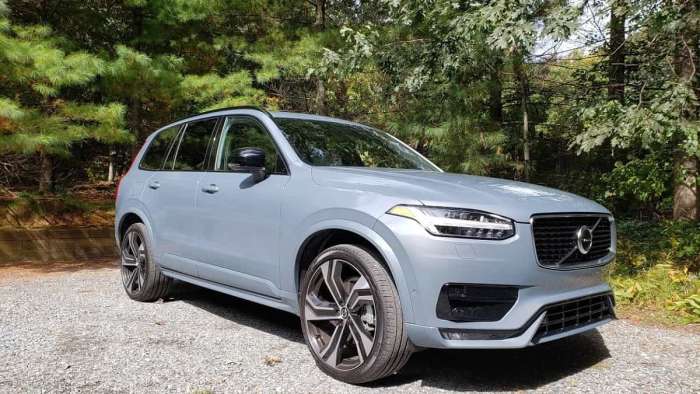 Consider this author a convert to the Volvo thing. Here's why.
Advertisement

Volvo has long been a safety brand. In fact, until recently, there was little to distinguish Volvo from any other automaker, since for the past decade every automaker has turned into a safety brand. However, Volvo has been transforming itself into more than a Swedish* one-trick pony. The 2020 XC90 is a prime example of how Volvo has kept to its roots and moved forward.

XC90 - Safety
Of course, the XC90 has all the active safety aids imaginable. We won't bore you with the details. If you can imagine it, it's there. The XC90 we tested was a $74,730 T6 AWD R-Design trim. It scores a Top Safety Pick award from IIHS. If you know IIHS scoring, you know that is not the top score possible. The "Acceptable" rated headlights hold the XC90 back. Which is hilarious, because the active-adaptive headlights are the best we have ever experienced. So why did they score below the top? Because of excessive low beam glare.

Our "Aha! moment" came when my son and I were driving on a two-lane road with a 35 MPH speed limit. The driver ahead, a teen, was looking down at a device, drove off the road to his shoulder, then corrected. That sent his vehicle across the double yellow lines onto our side. He then swerved back into his own lane missing us. I had no time to brake, but the Volvo started to. He went by still looking down. Had the timing been one instant different he would have driven his rust-bucket Malibu head-on into the force that is the Volvo XC90 and possibly have died. We likely would have been uninjured but left sitting in a $75K doorstop. Aha! Now I get the Volvo safety thing.

Volvo Luxury and Technology
The XC90 had every luxury item we expect except one. That being ventilated seating. The heated steering wheel is there and so too are the great driver aids like adaptive cruise with lane-keeping. The infotainment has a nice variation on the touch-screen theme. Its menus are vertical instead of in horizontal rows. It works very intuitively. The infotainment also has Apple CarPlay and Android Auto. Theoretically. One has to load Volvo software to one's phone to enable it. Only Toyota and Volvo do this as far as we can tell. Every other brand's Android Auto simply connects automagically the first time you try it. The Bowers and Wilkins Audio is fantastic and the interior of the VX90 is gorgeously appointed.

Volvo Performance
Volvo's 2.0-liter boosted engine is the best in the world. It develops 315 hp and 295 lb-ft of torque and all of that torque is available at a low 2,200 RPM. The engine pulls the 4,400 pound XC90 around with ease. Power is plentiful in all situations and highway merges and on-ramps are a blast if you want them to be. Passing is easy with far more power than anyone will ever need in a full-sized crossover. Buy a larger engine if you like, it is simply window dressing. Our XC90 was not a plug-in hybrid. We would look closely at that option were we buying. 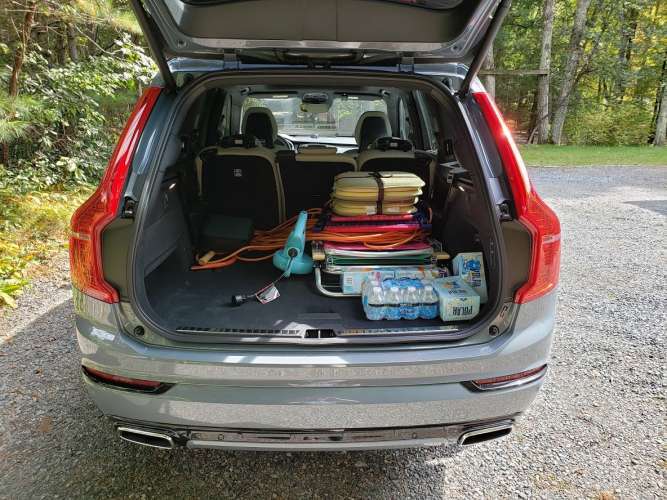 Volvo Cargo
We found the cargo capacity of the XC90, which expands to 86 cubic feet with the seats dropped, to be perfect. We moved supplies back and forth to a cabin in the north woods, just as we suspect many Volvo owners worldwide might do. Under the cargo area is a spare tire. 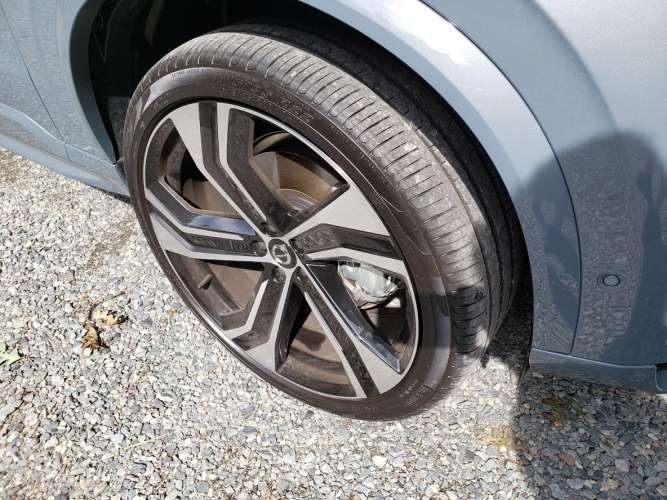 Volvo XC90 Conclusion
If safety is at top of mind, and you want a three-row full-size crossover with a high level of luxury, we feel the Volvo XC90 line is a perfect place to begin your search. We would carefully consider other trims. We loved the T6 AWD R-Design, but the 35-series ultra-low profile tires were harsh over some of the broken pavement we normally travel. Oddly, they were not harsh on dirt roads we drove on. We would look for a trim with a plug-in capability and tires that were more real-world durable and compliant over bumps.

What Volvo does better than any other brand is mix up the luxury, performance, safety, infotainment, and value components into a recipe that we think tops all rivals. And you don't have to have a kid in a Malibu drive into you head on to realize the benefits. Though it did provide us with clarity.

Note: *The XC90 we tested was Built in Gothenburg Sweden with 40% Swedish parts and a transmission built in Japan.

Theodore Taylor wrote on September 28, 2019 - 3:10pm Permalink
XC60 is still first choice as the thinking driver's SUV. Fast not furious, full of utility and none of the douche whiff that comes off most of the competition (yes I'm looking at you A8 X6 GLE Coupe).