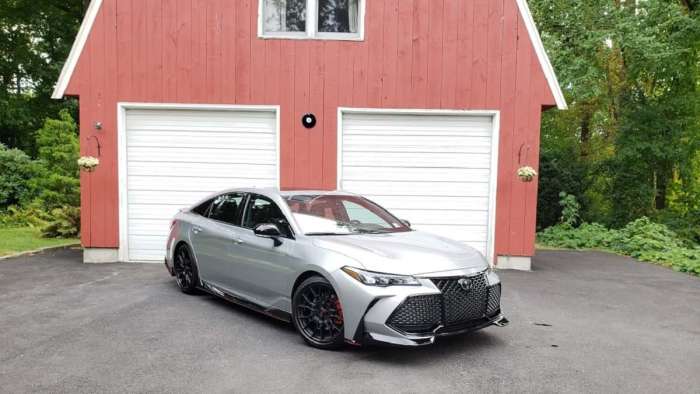 We test the 2020 Toyota Avalon TRD and find that it is literally three features from perfect.
Advertisement

2020 Toyota Avalon TRD - What is it?
The Toyota Avalon is a five-passenger sedan on the larger side of the car market. It is Toyota’s largest sedan, offering a bit more interior space and cargo space than a Camry. The Avalon also shares a lot of its bones with the Lexus ES 350. While not a full-blown luxury car, the Avalon certainly qualifies a premium car in its top trims.

The TRD trim of the Avalon is an odd duck. Toyota has created a more sporty version of the Avalon, which is not really a sporty platform. The TRD seems lower to the ground than a typical sedan, either due to its actual ride height being lower, or the plastic bits added to the bodywork to make it appear so. We suspect both. The TRD trim has unique seats, badging and tires, and also a unique exhaust. 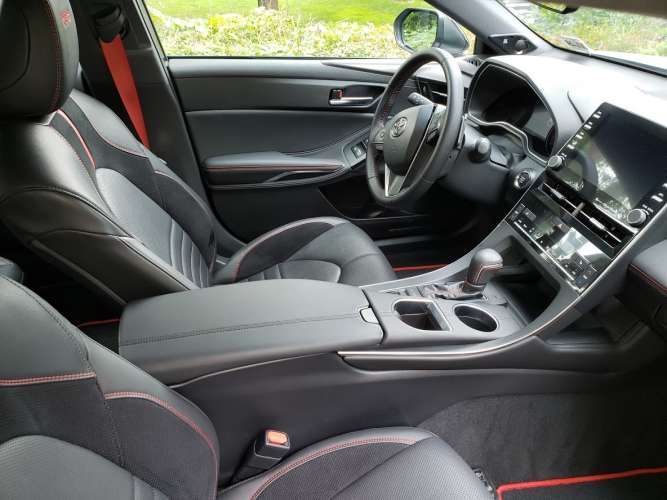 2020 Toyota Avalon TRD - What Powers it?
Like the top-trim Camry and Lexus ES 350 line, the Avalon TRD has a 301hp V6 engine. Although we find many small turbocharged engines to be very satisfying, the V6 in this Avalon is what many buyers really want. Smooth ample power with no hesitation. The 8-speed automatic transmission with paddle shifters is never in the way, never seems to hunt for a gear, and operates the way we suspect owners of most Avalons will want the transmission to.

Unfortunately, the Avalon TRD is front-wheel drive. While we appreciate the many benefits of front-wheel drive in certain cars, it has no place in a large performance car. There are AWD Avalons, but not AWD TRD trims. Odd.

2020 Toyota Avalon TRD - The Drive
The Avalon drives so smoothly and sometimes quietly (hold that thought) it easily matches the more expensive European models we test in this size. Frankly, in many ways, we prefer the Avalon to many of them. The Avalon feels very solid, feels of very high quality, and one gets the impression it will be that way for some time. Our tester had nearly 10,000 miles on the odometer, and it was completely free of any rattles or noises inside from loose panels or window seals.

Around town, the Avalon is a comfortable cruiser. We had a chance to sample some back-roads and found the Avalon fun to drive in a spirited way. On the highway, the Avalon is clearly a great road-trip car. Except for one thing.

The TRD exhaust is annoying. Toyota added a loud exhaust because in the old times of American motoring that sound was equated with performance. The exact opposite is true today. Tesla, Jaguar, and even Toyota itself with the new RAV4 Prime have re-written the playbook on what performance feels and sounds like. Silent is what performance now sounds like. The constant drone of the Avalon’s TRD exhaust is hard to take. Perhaps you are looking for a full sized sedan with a loud exhaust. If you are, then your chariot awaits.

2020 Toyota Avalon TRD - The Cost
Our 2020 Avalon TRD has a price of $45,410 including destination. It had only two options included in that price. A $1,760 JBL stereo upgrade that also comes with a 9-inch infotainment screen, and a paint protection film priced at $395. Both options seem like smart choices to us in a car of this type. If we could add AWD to that list for a price of around $2,000 we would jump at the chance were we shopping for an Avalon TRD.

2020 Toyota Avalon TRD - Infotainment & Features List
2020 is quickly coming to an end, and we expect updates to the Avalon. Ours had no Android Auto, which meant no Google Maps, no Waze, and only partial Pandora integration via Bluetooth fo we Android users. We cannot recommend any car to any shopper on team Android that does not have this now mature technology. In fact, we would expect it to be wireless. Our research indicates that Android Auto will appear for model year 2021.

The TRD trims does have excellent microfiber-trimmed Softex seats (but they are not cooled). We loved the comfort as well as the stying of the interior overall, and the seats seemed to fit us particularly well. To its credit the Avalon also has a compact spare tire under the cargo floor.

2020 Toyota Avalon TRD- Overall
Some cars we test just cry out for easy changes that would make them dramatically better. The Avalon is a great car worthy of a better exhaust, more modern infotainment, and AWD. If Toyota makes those few changes it would earn our two thumbs up endorsement.

secure-pak wrote on October 23, 2020 - 2:41am Permalink
I keep track of your posts, it is really a useful source of information, wish you success.
Michael Brennan wrote on October 27, 2020 - 1:42pm Permalink
Hi John, Thank you for the reviewing the TRD Avalon. Car has real nice look but exhaust noise can really turn some people away. Some may enjoy it. Toyota quality through and tjrough.