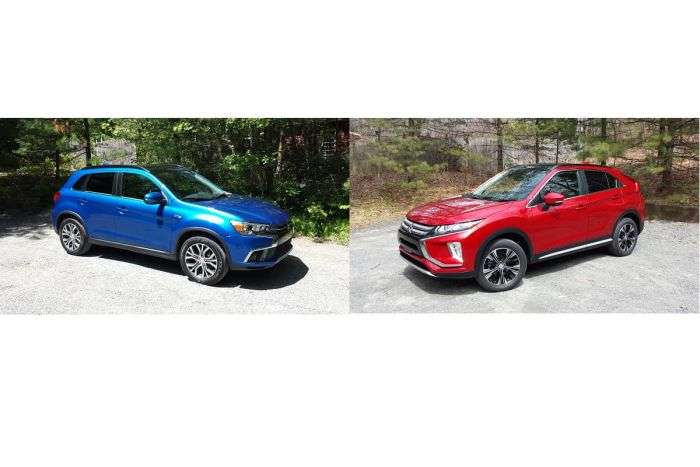 2018 Mitsubishi Eclipse Cross vs. Outlander Sport - How Are they Different?

We test both the 2018 Mitsubishi Eclipse Cross SEL and Outlander Sport SEL. Here's what we found.
Advertisement

Torque news has become a fan of the Mitsubishi line of crossovers after having tested every one Mitsubishi makes for the U.S. market. The Outlander, Outlander Sport, and new Eclipse Cross all share many of the same features. Two of them, the Eclipse Cross and Outlander Sport are also almost identical in size. We break down the similarities and differences for those shoppers who may be considering one or the other.

Our SEL trims both had great content including Android Auto and Apple Car Play compatibility, leather-trimmed seats, a moonroof (the Eclipse Cross has a larger one), and many amenities an upscale trim would justify. They look very similar inside.

They also feel the same when driven. Wearing the same tires on the same size rims, they both are a bit tippy feeling compared to some of the more car-based compact crossovers we have driven. Not in a bad way, but you know this is a crossover, not a car. Acceleration feels good in both. Both handle bumps very well, and both had AWD.

2018 Mitsubishi Eclipse Cross vs. Outlander Sport - Differences
Although the styling is different outside, the grills and rear 3/4 sections are not the same, at a glance they look alike. The Eclipse Cross is a bit more flashy, though it looks like a Pontiac Aztec from the rear.

The new Eclipse Cross uses a small turbocharged engine and CVT, the Outlander Sport uses a 2.4-liter non-turbo engine and CVT. Both are rated at 25 MPG Combined by FuelEconomy.gov, and both feel the same to us. The turbo may have an edge in some situations, but the 2.4-liter engine has been proven to be reliable.

The one major difference inside is the infotainment system. The new Eclipse Cross uses a mouse trackpad we did no like and never really figured out in a week of use. The Outlander Sport uses a touch-screen that we find to be very easy to live with. Both have the same size screen (7 inches).

Conclusion
Take your pick based on taste and looks, but the Eclipse Cross SEL had an MSRP of $ 32,310 and the Outlander Sport SEL rang in at 29,110.

Noel wrote on September 15, 2018 - 2:46pm Permalink
Getting as bad as GM with makes my the same ca twelve times. No originality the cross is a dumb idea. I had a 2011 outlander and hike it was a nice car it was a tin box. I got rid of the dog after a year as the CVT was horrible unsafe in traffic and braking hard